An Su-24 dropped four bombs in the path of the vessel in the Black Sea after Russia accused it of entering its waters near Cape Fiolent.

The patrol ship opened fire at 12.06pm and shot again two minutes later at the destroyer which is on exercises with US, Dutch and Ukrainian forces. 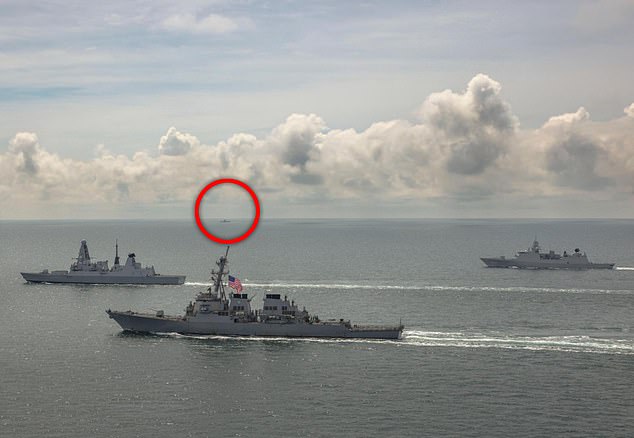 Around ten minutes later, the Su-24 dropped four OFAB-250s in the path of the British vessel.

At 12.23, HMS Defender retreated, having ventured as much as two miles inside, the ministry said.

The ministry alleged the destroyer refused to listen to radio warnings before the shots were fired.

The British military attaché to Moscow has now been summoned to the Russian defence ministry after the border incident.

‘The destroyer had been warned that weapons would be used if it trespasses the border of the Russian Federation. It did not react to the warning,’ the Russian ministry said.

Russia annexed the Crimean peninsula from Ukraine in 2014 in a move condemned by the West which still considers it Ukrainian territory. 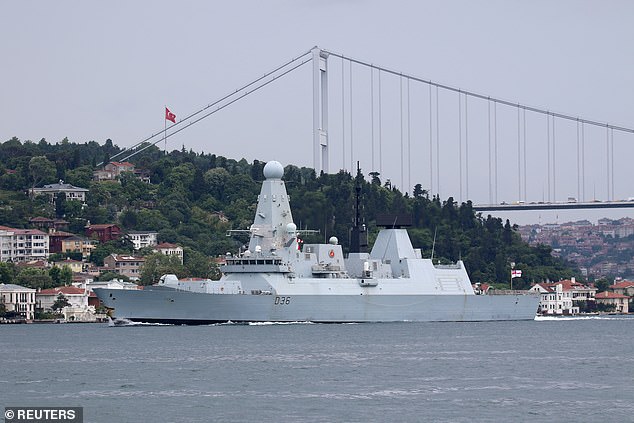 Britain has previously claimed its warships ships stationed are in international or Ukrainian waters.

The ministry’s TV channel Zvezda reported: ‘The Black Sea Fleet together with the FSB (security service) stopped a violation of the Russian border by a British destroyer Defender.

‘Today, at 11:52, the Defender crossed the state border of Russia in the northwestern part of the Black Sea.

‘It entered the territorial waters for three kilometres, in the area of Cape Fiolent. 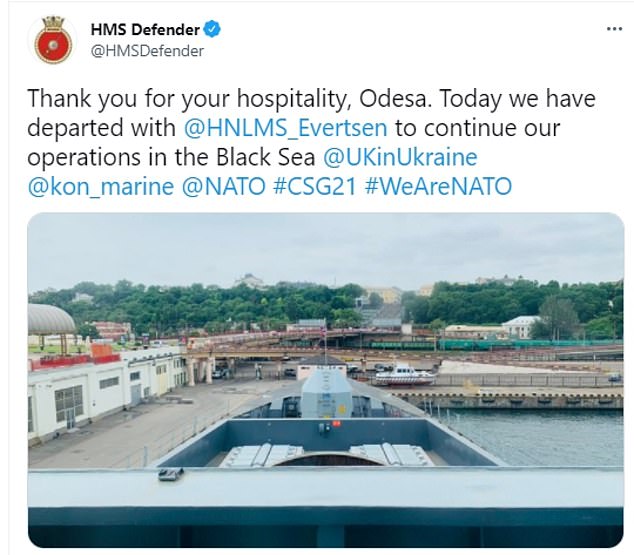 On Tuesday, HMS Defender sent a messages of thanks to Odesa as it continued its operations in the Black Sea

‘Previously warned about the use of weapons in the event of a violation of the border, the British ship did not react to this in any way.

‘At 12:19, the Su-24M aircraft of the Black Sea Fleet performed a warning bombing, dropping 4 OFAB-250 bombs on the course of the destroyer.

‘At 12:23 the British destroyer left the borders of the territorial sea of Russia.’

The destroyer had been on operations in the Black Sea with American navy guided missile destroyer USS Laboon and Dutch warship HNLMS Evertsen in a show of support for Ukraine following Putin’s recent vast military build up close to Ukrainian borders.

Russia has said in recent days that it was closely monitoring HMS Defender. 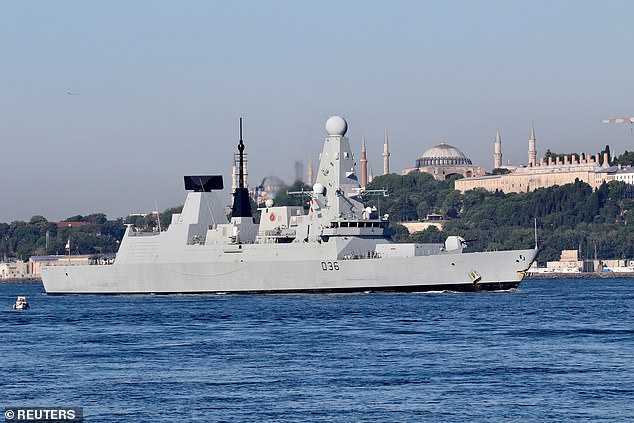 The fleet’s former commander Admiral Vladimir Komoyedov said: ‘Those ships will definitely not be welcome here.

‘No-one is going to greet them as guests of honour, while their actions will definitely be monitored.

‘They will be put under direct surveillance, technically, from the air and from outer space.’

The Russian fleet was enhancing ‘its combat preparedness, especially the readiness of air defence crews and particular standby forces’ with the presence of the NATO ships, he said.

They were being subjected to ‘close monitoring’.

‘Their visits to the Black Sea have become too frequent,’ said Komoyedov. ‘Their intensified presence has gone too far.

‘They are complying with the Montreux Convention, but the activity of ships from non-Black Sea countries has never been so intensive before, even in the Soviet period.’

The USS Laboon is in the Black Sea ‘to conduct maritime security operations in the region’, the United States Sixth Fleet said on Twitter.

The destroyer is capable of carrying up to 56 Tomahawk cruise missiles.

In a blast last month General Vladimir Kulishov, deputy director of the FSB security service, claimed that Royal Navy destroyer HMS Dragon had to be ‘expelled’ by the Russians ‘warnings’ not to enter ‘Russian territorial waters’ off annexed Crimea.

‘The destroyer Dragon of the British Navy crossed the state border of the Russian Federation in the area of Cape Khersones in the Black Sea,’ said the counterintelligence chief.

‘The destroyer’s captain responded with a poor signal to the demand to immediately leave Russian territorial waters,’ he said.

‘As a result of the joint actions with the Russian Navy and the Russian Aerospace Forces, the warship was expelled into neutral waters.’

British sources flatly denied the FSB claim which related to an incident in October last year.

‘The Russian Federation Navy did not impede HMS Dragon’s passage. She navigated without incident, exercising our right of innocent passage under the UN Convention on the Law of the Sea,’ said a Ministry of Defence spokesperson in London.

‘HMS Dragon was taking the most direct route between two port visits, navigating a recognised safe route for all international shipping within Ukrainian waters.’

Russia is known to have deployed submarine Veliky Novogorod to track HMS Dragon.