A Russian navy vessel was sunk by a walrus after it got too close to the female animal’s cub during an Arctic expedition.

The Northern Fleet, alongside the Russian Geographical Society, were sailing off Franz Josef Land on the Altai tug vessel but using smaller dinghies to go ashore.

The sailors were forced to flee one of the ships when a female walrus attacked the inflatable vessel.

But while the Geographical Society reported that the vessel had been sunk, the Kremlin’s Defence Ministry omitted the detail in its September 18 report.

The Geographical Society’s report said: ‘She probably did it, fearing for her cubs. The boat sank, but the tragedy was avoided thanks to the clear actions of the squad leader. All the landing participants safely reached the shore.’

The military’s version simply says the walrus attacked and that ‘serious troubles were avoided thanks to the clear and well-coordinated actions of the Northern Fleet servicemen, who were able to take the boat away from the animals without harming them.’

The researchers may have been flying a drone too close which could also have spooked the walrus, The Barents Observer reported.

The Russian Navy and the Geographical Society were conducting an expedition retracing the steps of Austro-Hungarian explorer Julius von Payer, who discovered the archipelago in 1873, naming it after the Emperor Franz Joseph I.

The Geographical Society has previously reported on the omnipresent danger in the Arctic, its predators and brutally cold conditions. 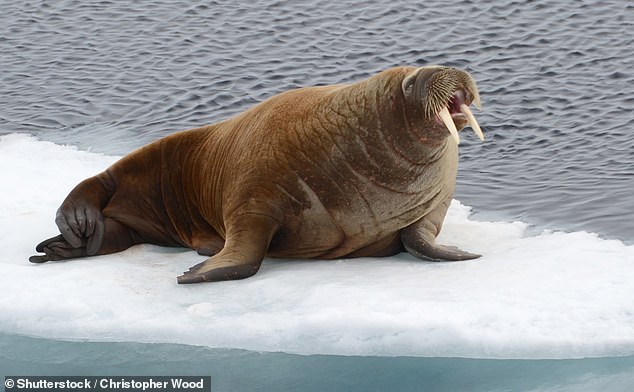 Walrus can become extremely aggressive and their ability to capsize boats is well documented in expeditionary literature (pictured: a walrus in the Arctic)

Walrus can become extremely aggressive and their ability to capsize boats is well documented in expeditionary literature.

Not only that but they are colossal, an average female weighs over 2,000lbs, about twice as much as a grand piano.

Walrus are certainly capable of overwhelming an inflatable ship.