Mr Filatiev, 33, dressed in his army uniform, was part of Russia’s invading forces on February 24. But now he opposes the ‘terrible war’ Russia had ‘no moral right’ to begin

Putin’s soldiers had no idea they were invading Ukraine until they took return fire from Kyiv forces, an ex-paratrooper in the Russian army has revealed in an explosive new memoir.

Pavel Filatiev, 33, says his elite unit was moved to the border with Ukraine after he had seen talk of a planned invasion in the world’s media, but that they were sent in with no warning that they’d be facing enemy forces.

His memoir also tells how he was given a rusty machine gun and an ill-fitting uniform, and that his comrades were wiped out because they were using ‘our grandfathers’ tactics’.

He said he woke up to the sound of gunfire in the back of an army truck crossing the border at 2am on February 24, the day the invasion began.

Filatiev asked: ‘Are we firing at advancing Ukrainians?

‘Where we were going and why wasn’t clear. It was clear that a real war had begun. I found out [we had] orders to go to Kherson.’

As shelling started and Ukrainian soldiers began firing at Russian vehicles, Filatiev said he realised he had invaded the neighbouring country.

He added: ‘It became clear that we had attacked Ukraine.’

In an explosive new book, Filatiev has highlighted appalling shortcomings from ill-fitting uniforms to army medics without syringes or painkillers.

Filatiev (left and right) claims ‘most of the army is dissatisfied with what is happening’ in Ukraine. He said President Putin is holding his nation’s soldiers ‘hostage’ in the ‘terrible war’

The paratrooper was part of the original botched invasion, but soon quit on medical grounds.

Russian commanders are using ‘the tactics of our grandfathers’, he said.

In devastating extracts highlighted by independent media outlets iStories and Meduza, Pavel wrote: ‘We had no moral right to attack another country, especially the people closest to us.

‘When all of this started, I knew few people who believed in Nazis and, moreover, [who] wanted to fight against Ukraine.

‘We didn’t have hatred and we didn’t think of Ukrainians as enemies.

‘Most of the army is dissatisfied with what is happening there.

‘[They’re] dissatisfied with the government and their commander, with Putin and his policies, [and] with the defence minister, who [has not served] in the army. 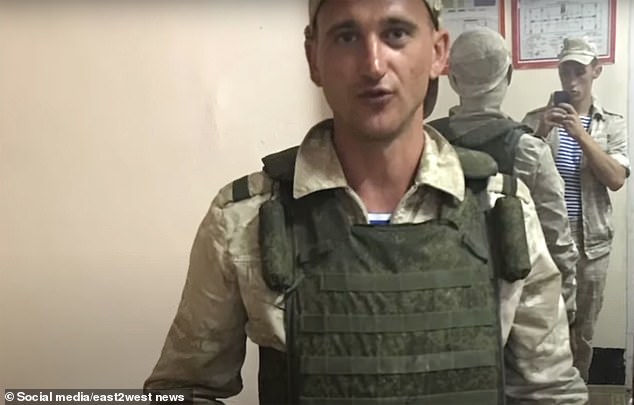 Soldiers became ill during training as they weren’t given warm clothes in sub-zero temperatures, Filatiev said. He is pictured in army gear at a Russian military base

‘We have all become hostages of many forces and I believe that we got carried away.

‘We started a terrible war. A war in which cities are destroyed and which leads to the deaths of children, women, and the elderly.’

The lack of preparation began when he was issued an ill-fitting second hand uniform.

He said: ‘I refused to accept a used uniform that didn’t fit, which is why my relationship with the command began to deteriorate.

‘After arguing with my company commander, I went and bought myself a pea coat.’

Training for the war led to many servicemen getting sick because they did not have the proper uniform.

‘We went to the [training] ground for [parachute] jumping,’ he said.

‘At night, it was below zero and we were driving in uncovered KamAZ trucks.

‘Many of the servicemen didn’t have warm clothes: some hadn’t received any, others refused to accept them. 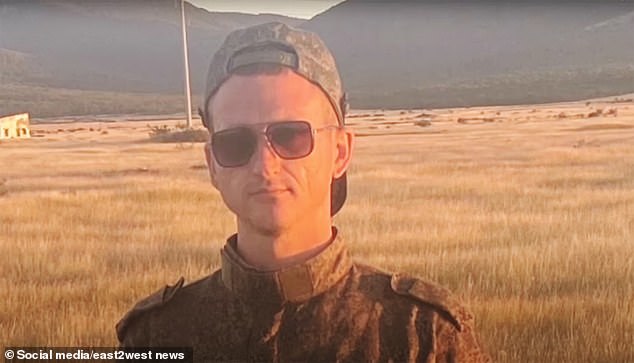 ‘Within a week, about 30 servicemen from my unit were admitted to the infectious diseases unit.’

All those who were ill had been on the bungled training jumps in annexed Crimea, he said.

‘In mid-February, my company was at a training ground in Staryi Krym. I realised that something was definitely brewing — everyone who had been discharged or fallen ill was rounded up and sent to the training ground. 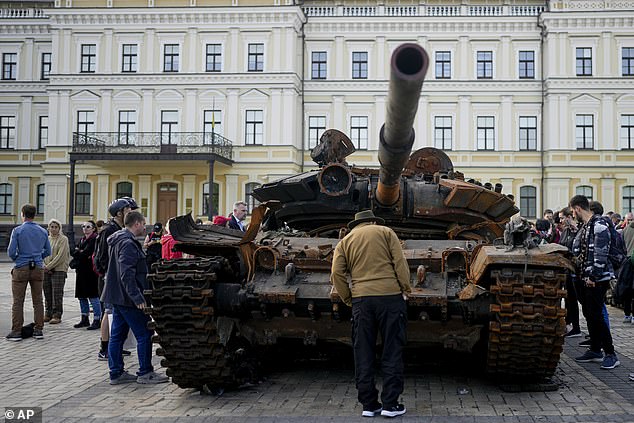 ‘Over the next few days we went to the firing range, where I finally picked up my machine gun.

‘It turned out that my machine gun had a broken belt and was just rusty.

‘On the very first night of shooting, the [cartridge] jammed.’

Even as Putin’s regime denied it was going to war ‘at some point on February 20, the order came for everyone to urgently pack up and move out.

‘There was about to be a forced march to an unknown destination.

‘At that point, everyone was already dirty and exhausted.

‘Some had been living at the training ground for almost a month…everyone’s nerves were on edge, and the atmosphere became increasingly serious and incomprehensible.’

The start of the war became chaotic with his own commander not knowing what he was supposed to do.

‘On February 23, the division commander arrived and, congratulating us on the holiday [Defender of the Fatherland Day], announced that as of tomorrow the daily wage would be $69 [£57]. 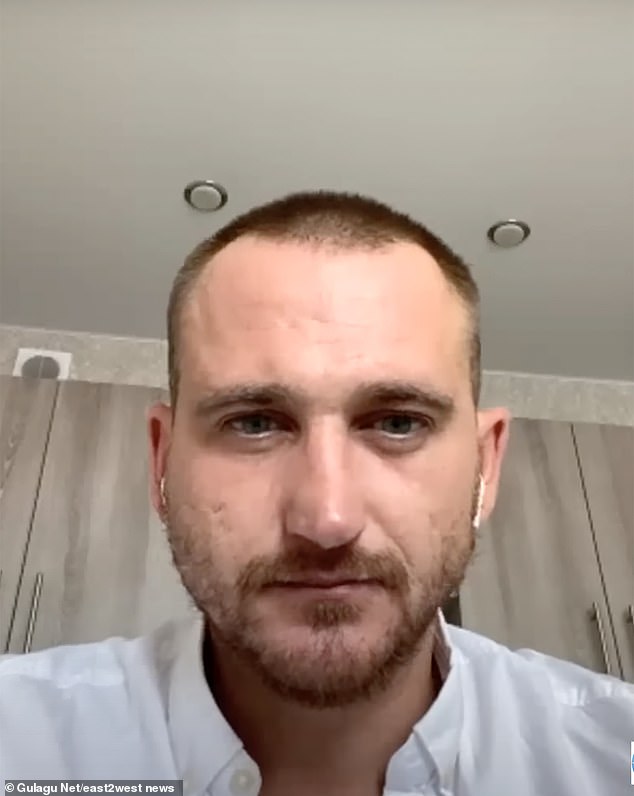 Filatiev said when war began: ‘I couldn’t understand: are we firing at advancing Ukrainians?’

‘It was a clear sign that something serious was about to happen.

‘The column was lined up somewhere in the wilderness, and everyone had turned off their engines and headlights.

‘Rocket artillery was operating to the right and left of our column.

‘I couldn’t understand: are we firing at advancing Ukrainians?

‘Or maybe at NATO [forces]? Or are we attacking? Who is this hellish shelling aimed at?

‘The column slowly began to move.

‘I heard gunfire and explosions from the direction we were going.

‘We already had wounded and dead [servicemen].

‘The command had no communications. The commander didn’t understand what was happening.’

He told how his forces killed civilians.

‘I learned that someone fired on a civilian vehicle from a BMD cannon. There was a mother and several children in the car. Only one child survived.’

He revealed an army stuck in the past and far from ready for the war Putin was convinced would take control ion Ukraine in days.

‘All of our training was only on paper, our technique was hopelessly outdated,’ he said.

‘We still have the same tactics as our grandfathers.

‘Those who broke through first were destroyed. 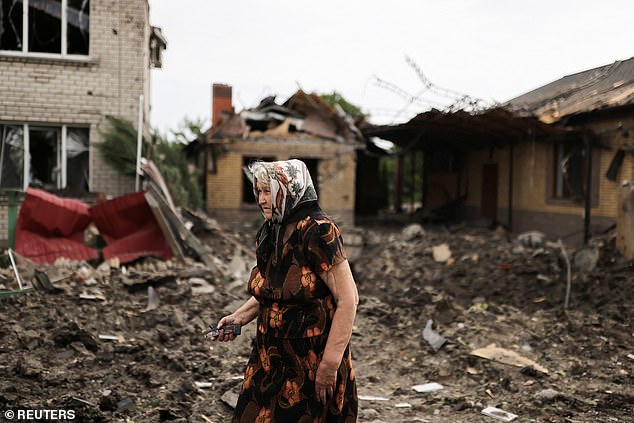 Kramatorsk resident Luiza, 74, watches on as locals repair their wrecked homes after bombing

‘The guys told me that there are [only] 50 people left in their brigade.

‘[When] it started to get dark, the entire team hunkered down.

‘It was very cold. No one had sleeping bags, the frost got into your bones.

‘We didn’t even need the enemy, the command had put us in such conditions — homeless people live better.

‘[The next day] we arrived at the Kherson seaport.

‘Everyone started to search the buildings for food, water, showers, and a place to sleep.

‘Some began pilfering computers and everything valuable that they could find. I was no exception: I found a hat in a broken down truck and took it.’

He told how ‘the offices had a canteen with a kitchen and refrigerators.

‘We, like savages, ate everything that was in there.

‘During the night, we turned everything upside down.’

Filatiev told how ‘by mid-April, I had dirt in my eyes due to artillery fire and keratitis had set in.

‘After five days of suffering, at which point [one] eye had already closed shut, I was evacuated.

‘The paramedic who sent me to be evacuated asked me to tell the medical detachment that he didn’t have syringes or painkillers.’

He revealed how ‘we were taken to one of the barracks that was set aside for those who had been discharged from the hospital. 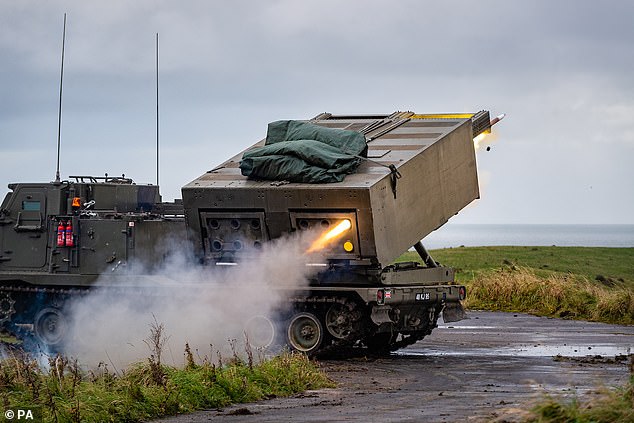 ‘There were a hundred people there who had returned from the war and were coming undone after what they had experienced.

‘One stuttered a lot, I saw two people with memory loss, [and] many people there drank heavily, drinking away the money they had earned.’

The paratrooper said: ‘I had to get treatment and buy medicines with my own money.

‘For two months I tried to get treatment from the army: I went to the prosecutor’s office, I went to the command, to the head of the hospital, and I wrote to the president.

‘I decided to go through the military-medical board and leave [the army] for health reasons.

‘The command said that I was evading service, and sent documents to the prosecutor’s office to initiate a criminal case. They’re using this bluff to try and send a lot of people back.’

In battle he felt compromised by the army leadership.

‘I can only drop my weapon and run back somewhere and become a coward or go after everyone [Ukrainians],’ he said.

‘Now I understand that I was used.’

Putin’s propaganda media, the use of draconian laws, promises of extra cash for fighters, and the use of honours and medals are locking soldiers into the war machine, he said.

‘I understood that if suddenly from one of the houses… if I see danger, I will shoot without thinking.

‘Inattention or delay is the death of me or my comrades, doubts are dangerous.

‘But at the same time, I didn’t want to kill anyone.

‘The death of innocent civilians has been and will be in any war, but it becomes disgusting in the soul.

‘While our governments are figuring out among themselves how to live, and the military on both sides are their tool, peaceful people are dying, their habitual world is collapsing.

‘When you realise this, you don’t know what to do.

‘Drop everything and leave — then you will become a coward and a traitor.

If you continue to participate in this, you will become an accomplice to the deaths and sufferings of many people.’

His book in Russian is entitled ‘ZOV’ after the symbols painted on Putin’s military vehicles.