It’s scary enough standing at the top of a 16-floor building with your feet planted firmly on the ground.

But a Russian pole dancer has taken it one step further by performing her stunts upside-down on the aerial of a high-rise building.

Marina Korzhenevskaya, 27, captured the feat branded ‘amazing and terrifying’ by her Instagram followers in Voronezh, a Russian city south of Moscow.

Marina Korzhenevskaya, 27, performed a pole dancing routine on top of a 16-floor skyscraper in Voronezh, Russia

The talented dancer wraps her body around the pole and performs her routine.

Wearing only leggings and a sports bra, Marina appears suspended on the pole using only her legs to support her.

She contorts her body, going upside-down and hangs perilously off the slender aerial.

She spins around, seemingly unaware of the drop below her. 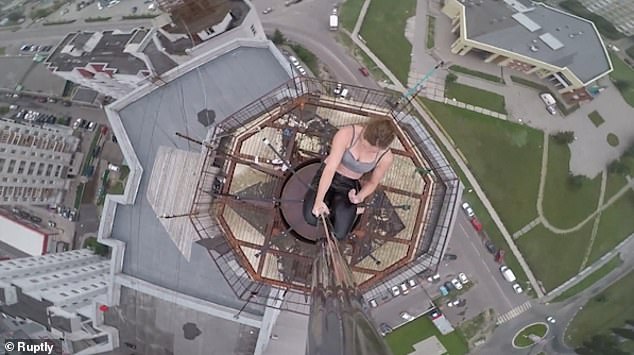 Poley moly! The talented dancer uses only her legs to support herself and twists and turns upside-down on the narrow pole 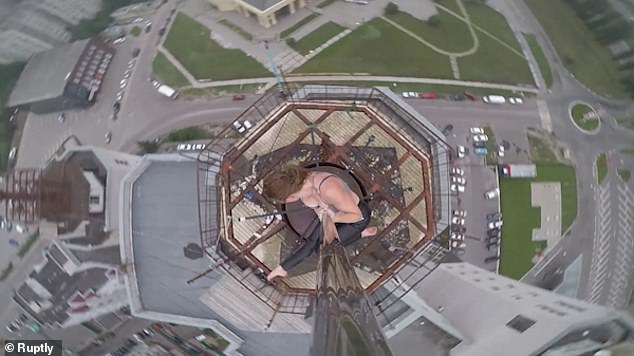 Her video has amassed 23,000 views on Instagram in three days and viewers have been both terrified and amazed by her stunt

Drones captured the death-defying stunt and reveal the jaw-dropping height of the building.

Marina uploaded the video to her Instagram page where it has since amassed 23,000 views in three days.

The video, captioned ‘no comment’, has delighted and terrified viewers in equal measure, with posts on her video calling her ‘magical’ and ‘crazy’.

Among the many comments below the video, one user said: ‘Wow… amazing and terrifying all in one.’

Others have said the video made them feel ‘anxious’ and they would ‘die of fright’.