A Russian Scarlett Johansson lookalike with 10.2 million followers who has taken TikTok by storm has spoken about the drawbacks of finding fame as a ‘double.’

Yekaterina Shumskaya, 25, or simply Kate Shumskaya as she is known on TikTok, from Moscow, attracted 1.5 million views within hours of posting her first ‘Scarlett video’ on the platform in February.

Her likeness to the glamorous star of Avengers has enabled her to quit her £6,250 job as a construction company sales manager and move from her home town, Maykop, to the Russian capital, Moscow, in May.

However she revealed there are downsides to the likeness, saying she has received death threats from followers after she dressed up as the actress in Ghost in the Shell.

She said: ‘When Scarlett Johannsson was accused of ‘whitewashing’ an Asian character in the film Ghost in the Shell, some of the criticism ended up aimed at me, as her lookalike…People from all over the world dress up as that character, but they decided to attack me, because I’m a lookalike. It was very unpleasant,’ 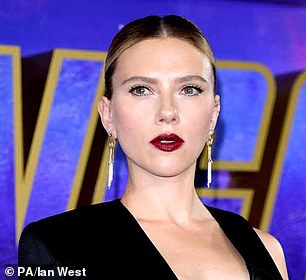 Yekaterina Shumskaya, 25, or simply Kate Shumskaya as she is known on TikTok, has quit her job and moved cities to pursue her work as a  Scarlett Johansson lookalike (left, Yekaterina, and right, Scarlett)

The keen sportswoman, who spent her schooldays training to become a professional handball player – a career that was scuppered by an injury at 17 – was first told she looked like the Hollywood star by classmates.

She explained: ‘Some schoolfriends came up to me when I was around 12 years old and showed me a photo and I was like, “Is that me?”

‘They said, “No, it’s Scarlett Johansson when she was a child,” and I was really taken aback. So I’ve known I look like her for a while, but I didn’t really think anything of it.’

Turning 17, she dabbled in modelling in the southern town where she grew-up, but soon gave up. 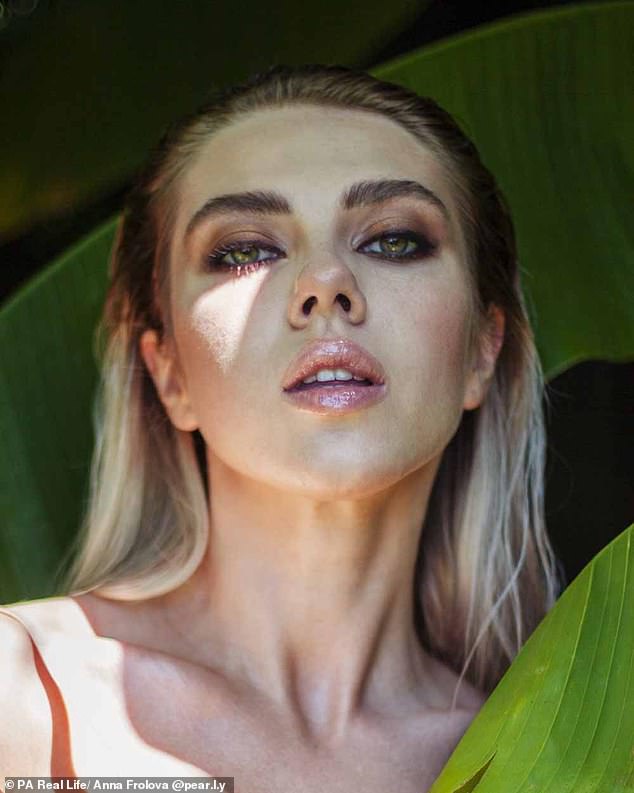 The keen sportswoman, who spent her schooldays training to become a professional handball player was first told she looked like the Hollywood star by classmates

She continued: ‘I first started on the predecessor of TikTok when I was 17.

‘I was quite popular in my region of Russia, but I became so bored and upset by the constant comments and messages that I deleted my page after just two weeks.’

Instead, she found an office job – quickly rising to sales manager and buying an apartment and a car by the age of 22, despite her meagre salary.

But by 2020 she felt something was missing in her life, saying: ‘I was starting to have enough of my work and thought it didn’t bring in the income I felt I deserved.’

‘As a woman, recognition and compliments are very important to me.’ 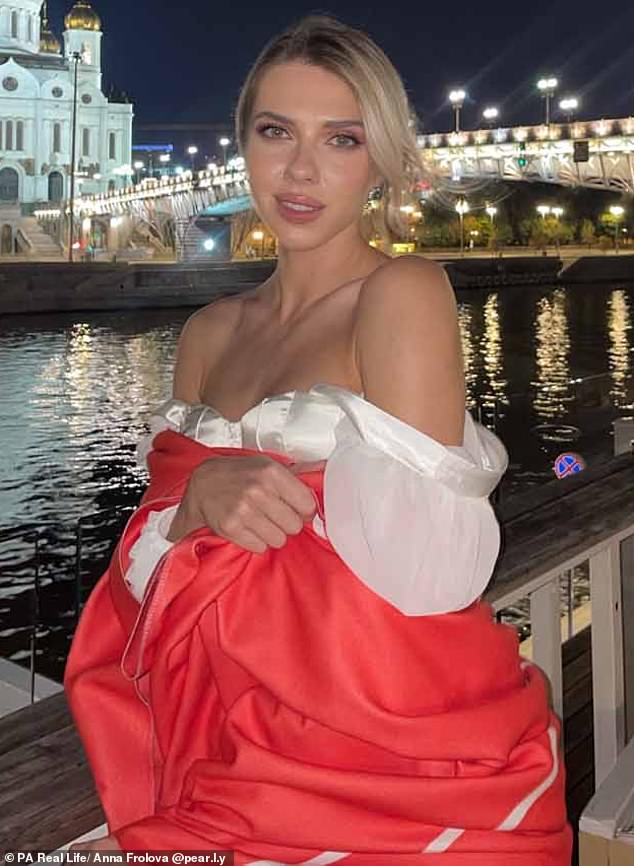 Her likeness to the glamorous star of Avengers has enabled her to quit her £6,250 job as a construction company sales manager and move from her home town, Maykop, to the Russian capital, Moscow,

‘Crudely speaking, I woke up one morning and thought, “My youth is passing me by and no one will even notice me soon.”

So, despite her parents’ disapproval, Kate decided to quit her job and pursue her dream of becoming a model.

She said: ‘My parents even now don’t understand. They didn’t want me to leave my job. They thought I would never earn enough modelling for adverts.’

‘But I made my decision, I quit and well, it was worth it.’ 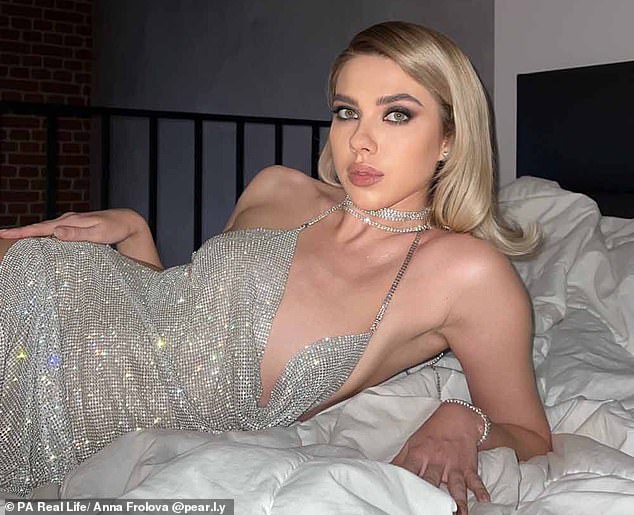 Kate is now is trying to use her popularity as a springboard into modelling – as herself, not as a Scarlett Johansson lookalike

And before Kate had even worked her notice, she had shot to online fame, saying: ‘At that time all everyone was talking about was TikTok.

‘So, I decided to see what all the fuss was about. There was this very popular hashtag at that time called “who do I look like?” in Russia.

‘People took videos of themselves with a voiceover saying, “People say I look like Connor MacGregor, who do you look like?”

‘I shot a simple video of my face with the voiceover and within a couple of hours major Russian bloggers had noticed me and I had over a million views for my very first TikTok.

‘There were millions of followers, mainly men, from America, Colombia, Brazil, Chile, all commenting and asking if I had spoken to Scarlett or if she knew I existed.’ 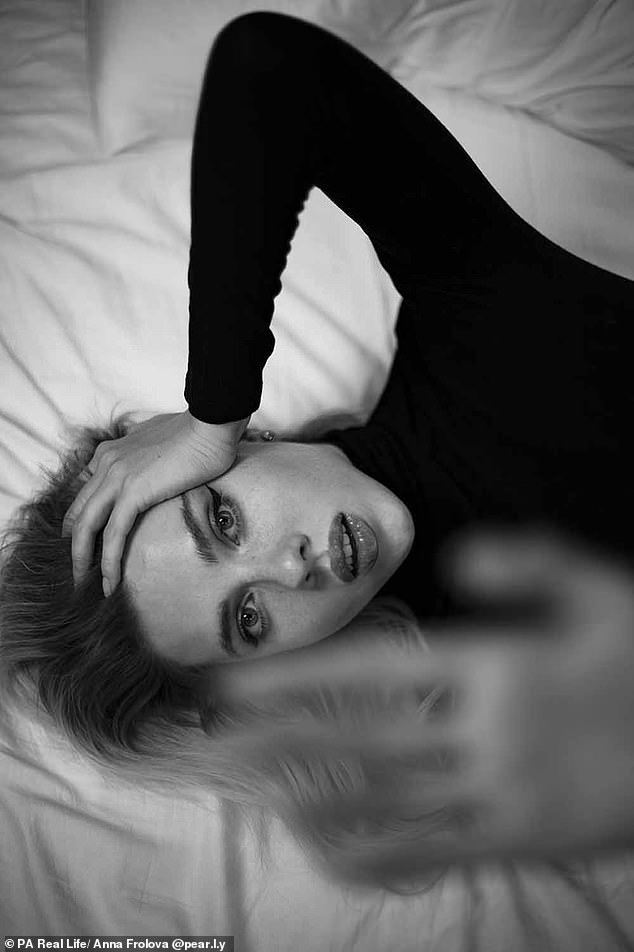 Kate enjoyed the attention at first and revelled in her newfound fame as she started being approached with lucrative advertising contracts and was asked to relocate to Moscow.

But, despite being backed by an advertising agency, instead of the storming reception she had anticipated, Kate said: ‘There is no culture of professional lookalikes in Russia.’

‘When I became so popular online, I moved to Moscow to work as a model, but I still don’t really know what’s going on.’

‘An advertising agency brought me here but, to be honest, in Russia they don’t know what to do with me.’

‘I’d love one day to film a series of videos of me travelling to America to meet Scarlett Johansson herself.’

‘My followers always ask if I’ve ever spoken to her or whether Scarlett knows if I exist and I don’t know the answer.’ 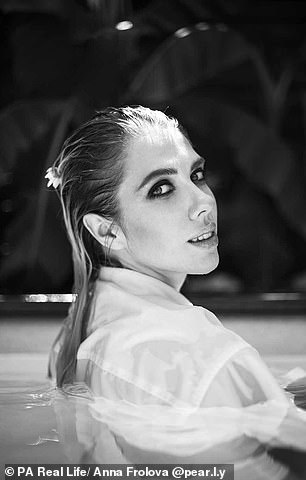 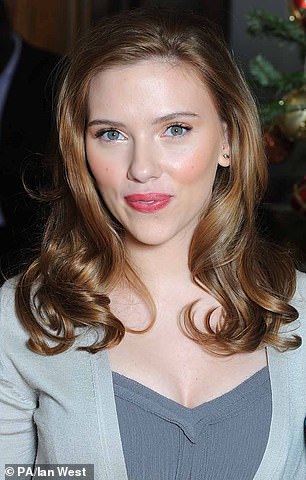 When Scarlett Johannsson was accused of ‘whitewashing’ an Asian character in the film Ghost in the Shell, Kate said she received death threats (left, Kate and right, Scarlett)

Kate, whose most popular video in which she eats sushi dressed as Black Widow received 108 million views, is unfazed by the enormous following and is trying to use her popularity as a springboard into modelling – as herself, not as a Scarlett Johansson lookalike.

‘I want to live my own life, not Scarlett’s,’ she said.

‘It’s a secret how much I now earn, but let’s just say when I was working for the construction company I couldn’t afford to send any money to my parents to support them, now I can every month. They don’t want to accept it, but they know it’s my choice.’

There has also been a massive downside to online fame.

In 2017, Scarlett was met with accused of ‘whitewashing’ for taking on the role of Major, a crime-fighting machine powered by a human brain, usually portrayed as Asian, in the film Ghost In The Shell. 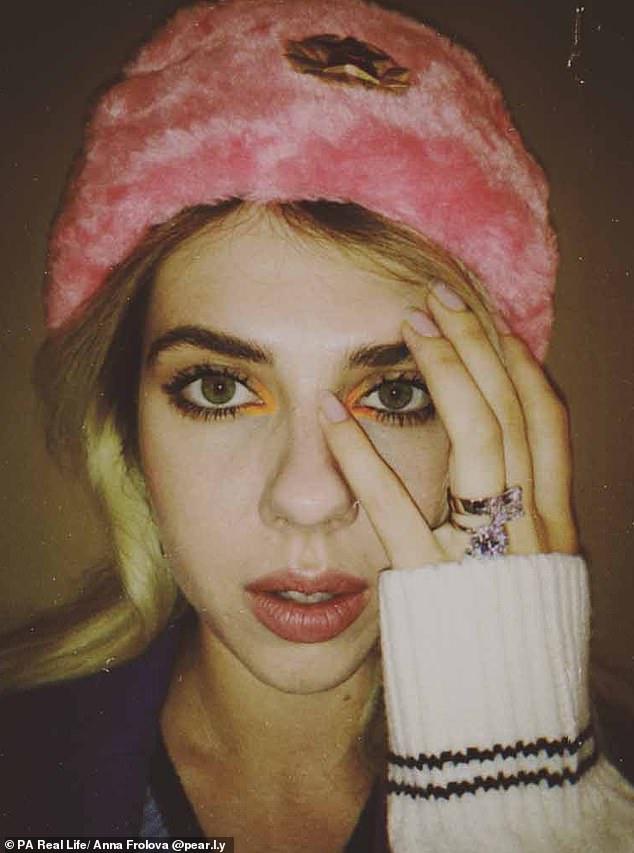 Kate now hopes to pursue a career as a lookalike abroad, because the industry ‘doesn’t really exist’ in Russia

And when Kate dressed up as the character, she was also met with criticism, saying: ‘Some people commented, saying, ‘Let’s kill her’ when I attempted to ‘cosplay’ Scarlett’s character from that movie.

Still, Kate can see a future for herself as a cosplayer, another word for a lookalike that dresses up as a popular character, despite the negatives, but more in the US, Europe or South America, rather than in her homeland because there are more opportunities abroad.

She said: ‘A career as a cosplayer in Russia doesn’t really exist, so I would like to visit these other places – although I wouldn’t live there permanently.’

‘Once my followers from all around the world encouraged me to go to the Moscow premiere of Black Widow as Scarlett, as she was starring in it.

‘I dressed up and went down to the centre of town with a photographer, but no-one came out to see me. People just looked at me as if I was a weirdo!’

‘I was so embarrassed that I burst into tears and ran to a cafe to get changed.’

‘Ironically, in the toilets, once I’d taken off my Black Widow costume, a girl came up to me and asked, ‘Do people often tell you you look like Scarlett Johansson?’ and I just screamed!’