Dr Jonathan McDowell claimed that the Kosmos-2491, a Moscow-built satellite, broke up in orbit in mid-December.

The space probe was believed to be part of the Nivelir project, a Russian program to produce maneuverable satellites used to inspect other space objects.

An artist’s impression shows the Kosmos-2491 flying above the earth. An expert has claimed that the Kosmos-2491, a Moscow-built satellite, broke up in orbit in mid-December

Dr McDowell’s tweet came after the US Air Force’s Project Space reported observing 10 fragments of what they believed to be remnants of the Kosmos-2491 military satellite.

The Kremlin has not commented on the loss of the probe.

Despite the discovery, Dr McDowell is uncertain of why it suddenly disintegrated.

Among his theories are that the probe was taken out deliberately.

He also said that left-over propellant could have blown up the fuel tank or the object collided with a piece of space rock.

In 2014, amateur astronomers followed the unnatural maneuvers of what was then referred to as object 2014-28E.

Many feared the start of a new extraterrestrial arms race but Russian space agency chief Oleg Ostapenko, insisted the 2491 was not a ‘killer satellite’, as it had been rumoured to be. 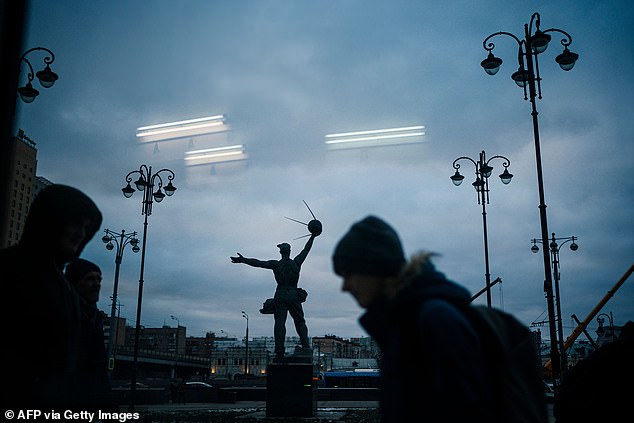 People walk in front of a monument honouring the launch of the first artificial satellite – Sputnik 1, near Rizhskaya metro station in Moscow on January 14, 2020

‘Whatever it is, [Object 2014-28E] looks experimental,’ Patricia Lewis, research director at think-tank Chatham House and an expert in space security, told the FT in 2014.

‘It could have a number of functions, some civilian and some military. One possibility is for some kind of grabber bar. Another would be kinetic pellets which shoot out at another satellite. Or possibly there could be a satellite-to-satellite cyber attack or jamming.’

The US has become increasingly concerned over Russia and China’s growing capabilities in space.