A Russian streaming star faces a fine or jail after posing naked in front of a church.

In the latest in a series of cases cracking down on revealing pictures close to sacred sights, Polina Murugina, 24, is undergoing a law enforcement check.

She faces a fine of up to £3,000 or a year in jail if found guilty of ‘insulting the religious feelings of believers’.

The tattooed online star posed outside the Church of the Intercession of the Blessed Virgin Mary in Moscow, say multiple media reports.

The picture was taken last summer but was only recently reported to police.

The streaming actress has not commented on the police action but has closed her Instagram account where the church image was published.

Polina Murugina, 24, posed outside the Church of the Intercession of the Blessed Virgin Mary in Moscow, say multiple media reports (pictured) 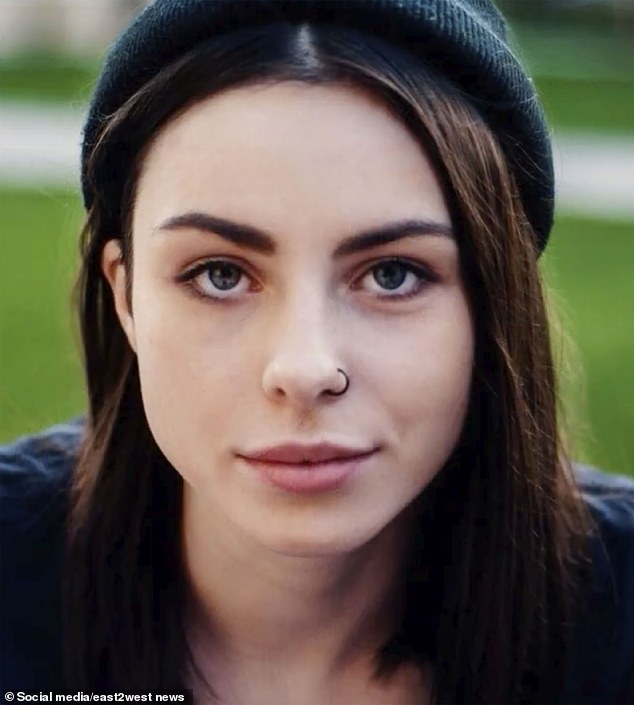 Murugina, pictured before getting face tattoos, faces a fine of up to £3,000 or a year in jail if found guilty of ‘insulting the religious feelings of believers’ 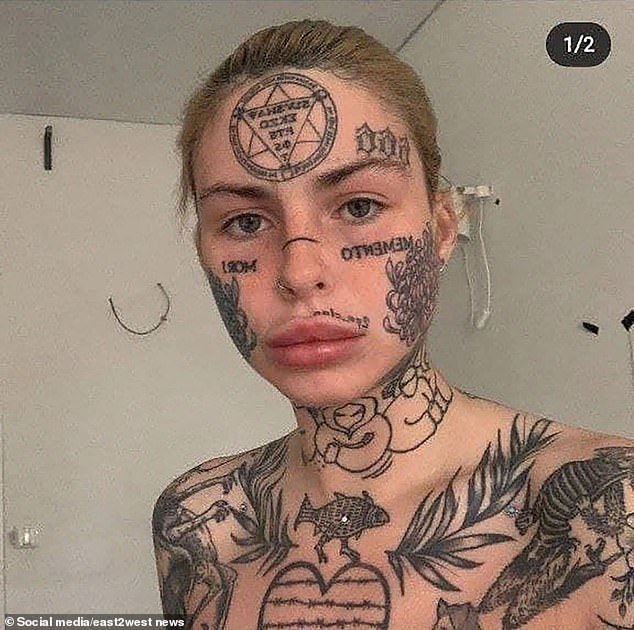 It is the latest in a series of Russian moves against racy posts beside churches or state buildings including the Kremlin.

Ruslani Murodzhonzoda – a 23-year-old Tajik national also known as Ruslan Bobiyev – and Anastasia Chistova, 19, had both apologised for the ‘harmless’ stunt posted on Instagram, but were shown no mercy by the judge.

They were imprisoned under a new Russian law which found them guilty of offending the feelings of religious people.

In another case, influencer Ira Volkova, 30, was held in St Petersburg for exposing her rear outside floodlit St Isaac’s Cathedral.

Meanwhile OnlyFans model Natalya Maslennikova, 20, was ordered to report to the FSB security service after baring her rear in view of a church in Kaluga in November last year.

This followed her pictures coming to light after police monitored the internet, according to a law enforcement statement.

The model issued an apology, and says she has been told by the FSB she will face a fine of up to £3,000 or community service.

‘It was not my goal to take a photo against the background of a church,’ she said, claiming she did not realise it was a place of worship.

‘It is very old and does not look like a temple from the outside….

‘The photo was taken when I was in a comic mood walking with a friend.’ 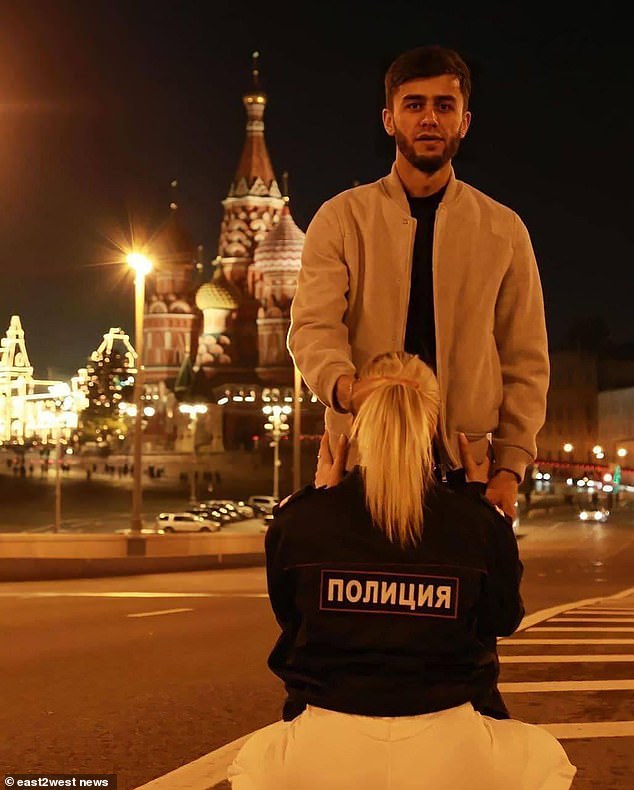 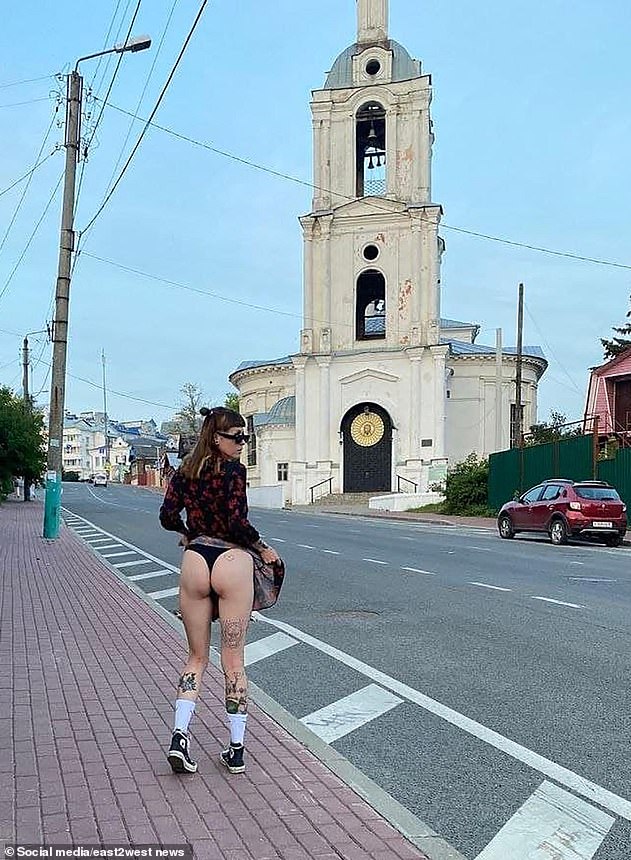 Instagram and OnlyFans model Natalya Maslennikova, 20, was ordered to report to the FSB security service after baring her rear in view of a church in Kaluga while taking a photo (pictured) 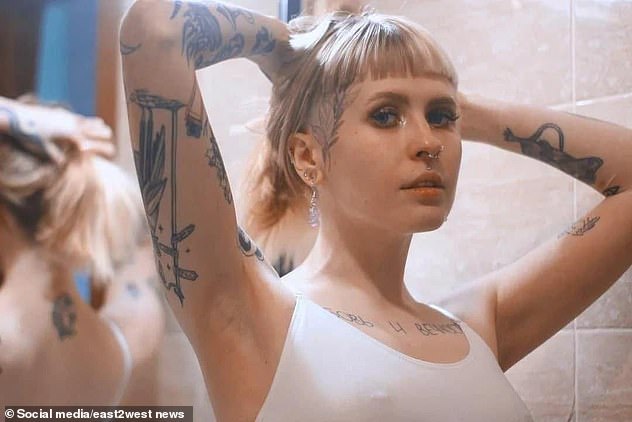 She faced a £3,000 fine or community service, after her picture was brought to the attention of security services who monitor the internet 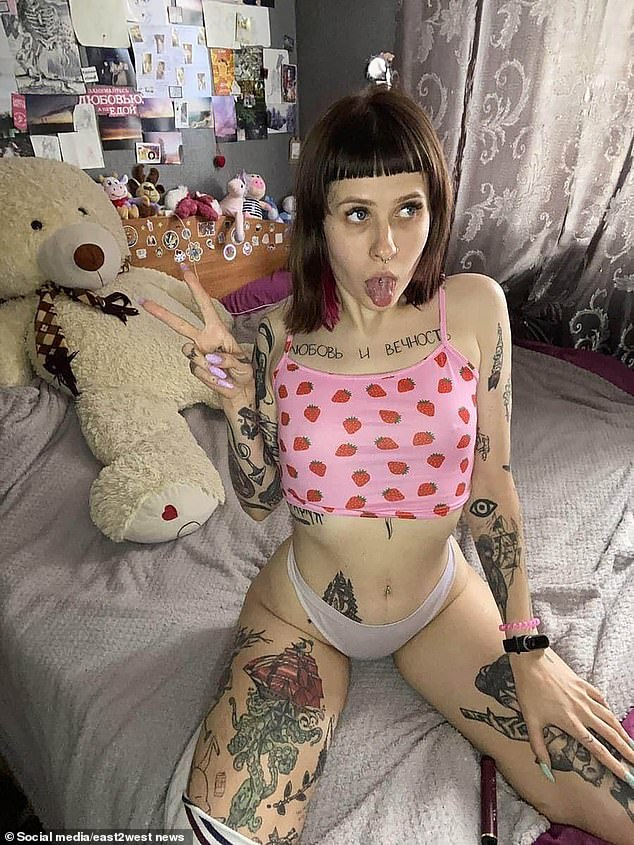 Maslennikova has since apologised for the photo, but also felt compelled to remove her accounts from the internet after being hit by backlash

She claimed she removed her accounts after she was trolled by Male State, a nationalist movement which has attacked Russian women.

She said she had been to the local FSB office and ‘written a confession’.

Mayor of Kaluga Dmitry Denisov said there was ‘something wrong’ with the ‘mind and soul’ of women like Maslennikova posing in such a way.

‘I want such girls to become caring mothers and beloved wives,’ he said.

‘I am sure they do not have enough in their lives.’

Vice-governor of Kaluga region Dmitry Razumovsky said: ‘Most likely it is the problem with the education of such people.’

He urged ‘public condemnation, rather than forceful methods’ to ‘correct’ them.