Ukraine’s president has warned that Russian tanks are massing along the border as he bans all Russian men of military age from entering the country.

Petro Poroshenko claimed to have evidence that Russian tanks are lining up just 11 miles (18km) from the border, close to where Russia stores its ammunition and multi-rocket launch systems, Sky News reports.

Triumf surface-to-air missile systems as part of an anti-aircraft military unit of the Russian Air Force and the Russian Southern Military District entered combat duty near the Crimean town of Dzhankoy, just 12 miles away from Ukraine.

Poroshenko made claims of a Russian military build-up on the border just hours after accusing President Vladimir Putin of wanting to annex his whole country.

‘This is the tank base just 18km from our border, this was happening in September, October, and now,’ Poroshenko told Sky. 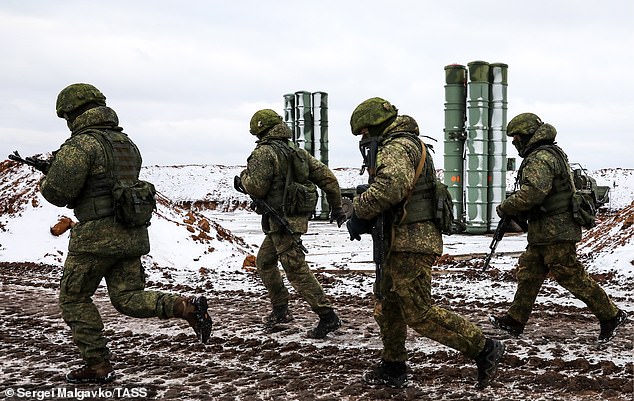 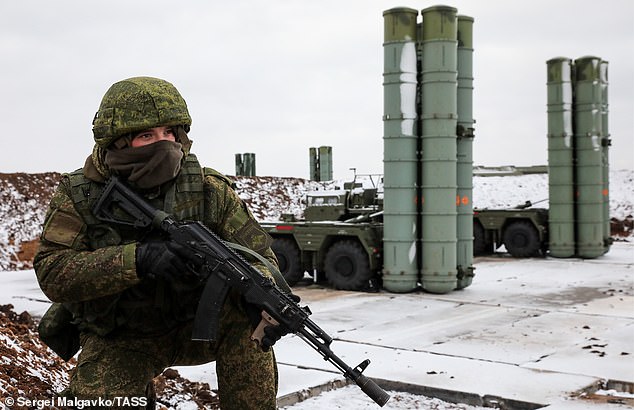 He added: ‘If the whole world has no reason to trust Putin, Ukraine definitely doesn’t have a reason to go with him.’

President Poroshenko also said the country has barred Russian men between 16 and 60 from travelling to the country.

The move comes as the long-simmering conflict between the two nations escalated in the Black Sea on Sunday when Russian border guards opened fire on and captured three Ukrainian vessels and their 24-member crew.

Poroshenko tweeted today that the restrictions on Russian travellers have been taken in order to prevent the Russians from forming ‘private armies’ fighting on Ukrainian soil. 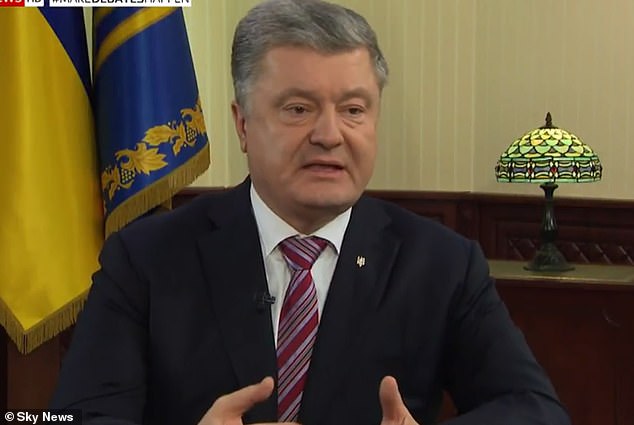 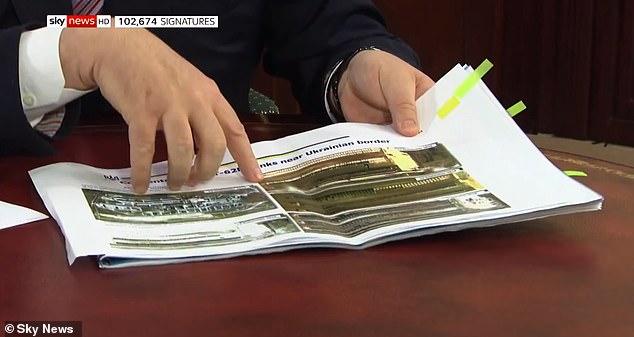 He showed Sky News what he claimed  is evidence that Russian tanks are lining up along the border, close to where Russia stores its ammunition 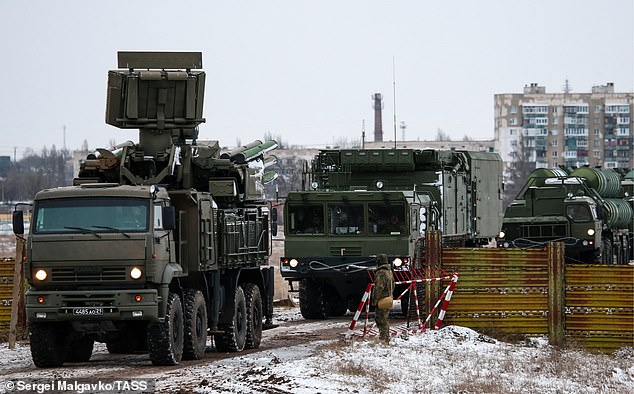 Russia seized three Ukrainian navy ships and their crews on Sunday near the Crimean Peninsula, which Moscow annexed in 2014, over what it said was their illegal entry into Russian waters – a charge Ukraine strongly refutes.

The Russian coast guard fired on and seized the three Ukrainian vessels that sought to pass from the Black Sea into the Sea of Azov through the Kerch Strait.

Ukraine insisted that its vessels were operating in line with international maritime rules, while Russia said they had failed to get permission to pass.

In interviews with Germany’s Bild newspaper and the Funke newspaper group on Thursday, Poroshenko rejected Russia’s charge that the vessels’ entry into the Sea of Azov – a body of water shared by Ukraine and Russia on which the Ukrainian ports of Mariupol and Berdyansk sit – was a provocation.

‘Don’t believe Putin’s lies,’ he told Bild, Germany’s biggest-selling paper, comparing Russia’s protestations of innocence in the affair to Moscow’s 2014 denial that it had soldiers in Crimea even as they moved to annex it.

‘Putin wants the old Russian empire back,’ he said.

‘Crimea, Donbass, the whole country. As Russian Tsar, as he sees himself, his empire can’t function without Ukraine. He sees us as his colony.’ 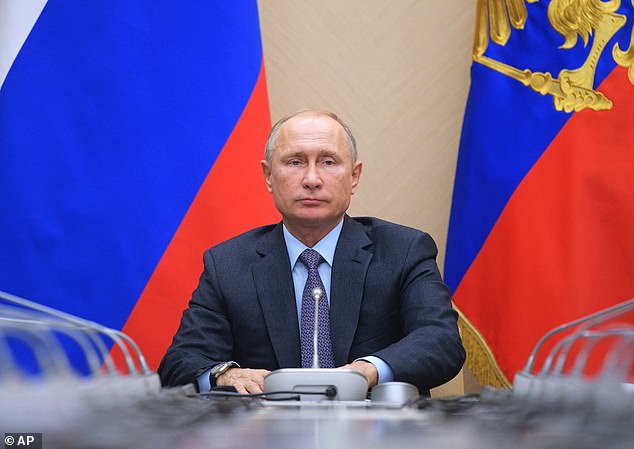 He added that there needs to be increased pressure on Moscow, including stopping the construction of the Nord Stream 2 pipeline, which is being built under the Baltic Sea and would bypass Ukraine to deliver gas directly to Germany.

Poroshenko said the government will impose unspecified restrictions on Russian citizens in response to the seizure of the three Ukrainian vessels and their crews.

He that the one-month period of martial law introduced this week in Ukraine wouldn’t restrict travel, cash withdrawals or currency purchases by Ukrainians but Russians will face some constraints.

The Ukrainian leader tweeted Thursday that ‘there will be restrictions regarding Russian citizens, which I believe are quite justified.’ He did not elaborate.

The seizure of the navy vessels drove tensions to their highest since 2015, when Moscow-backed rebels rose against the Kiev government in the eastern Donbass region, sparking a war that has killed tens of thousands. 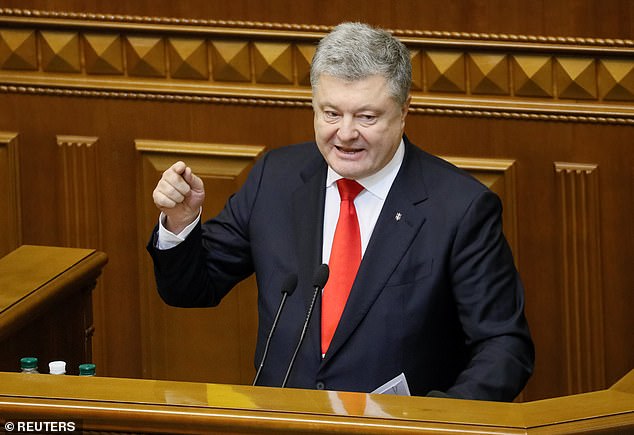 A Russian government-appointed ombudswoman said on Friday the three commanders of the Ukrainian vessels captured near the Russia-annexed Crimean Peninsula last weekend are being transferred to Moscow.

The Tass news agency on Friday quoted Russian government-appointed ombudswoman Lyudmila Lubina as saying that the vessels’ commanders are being transferred to Moscow for interrogation. The other 21 remain in custody in Crimea.

A Crimea court earlier this week ruled to keep the Ukrainian seamen behind bars for two months pending the investigation.

Poroshenko called on Germany, the largest and wealthiest buyer of Moscow’s gas exports, to halt the building of an undersea gas pipeline that would allow Russia to supply Germany directly, cutting out Ukraine. 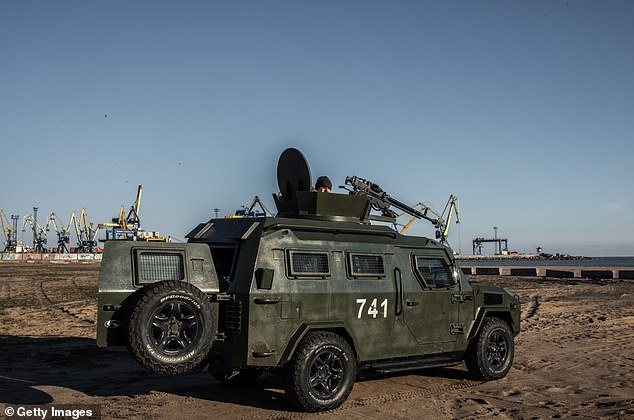 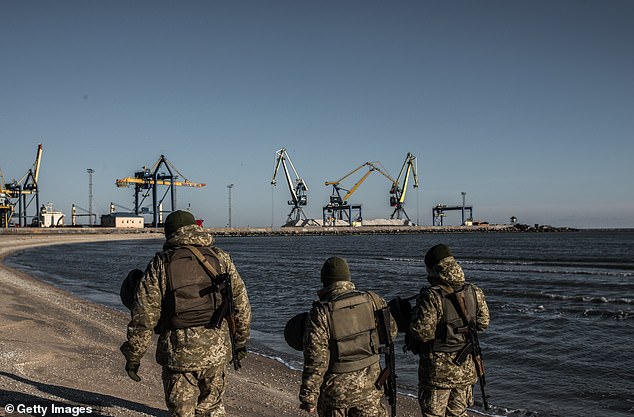 Germany regards the pipeline, which is being built by Russian state-owned energy company Gazprom, as a private investment. But Merkel recently acknowledged its ‘political dimensions’ and said Ukraine must continue to be a conduit for Russian gas sold to western Europe.

German officials said on Wednesday that their position on the pipeline remained unchanged and that talk of tighter sanctions against Moscow, demanded by the United States and many European politicians, was ‘premature’.

Poroshenko also called for the stationing of NATO vessels in the Sea of Azov.