A Russian tourist turned herself in to police after offending locals by posing naked on a 700-year-old sacred tree in Bali.

Police have so far declined to charge her with a crime but have turned her case over to immigration officers who may take a dim view of someone angry Buddhist-Hindu devotees have branded a ‘trashy tourist’.

Fazleeva boasted on social media about her nude photoshoot, saying she ‘heard her ancestors’ voices’ while she was hugging the bark and being ‘part of an endless chain’.

The self-proclaimed yogi’s post was recently discovered by a furious local and reported to the police as the tree turned out to be sacred, with locals believing it has spiritual power and significance.

As police investigated the incident, Alina went to the station ‘to cooperate’ but no official charges were filed against the woman. 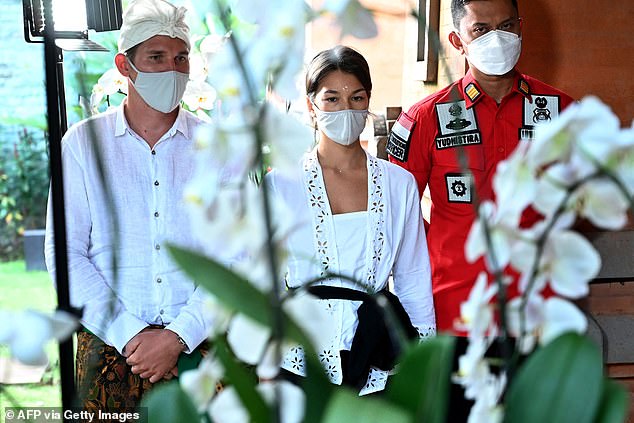 Russia’s Alina Fazleeva (centre) and her husband Amdrei Fazleev (left) attend a press conference in Denpasar. She boasted on social media about ‘hearing her ancestors’ voices’ while she was hugging the bark and being ‘part of an endless chain’

‘She underwent examination and was questioned by Bali Police investigators but this will be turned over to immigration officers.’

Police Chief Ranefli added that the pictures were apparently old and around 2019 before the pandemic.

He said: ‘We have also sent a team to investigate. The pictures and videos appeared to have been captured around 2019 before the pandemic.

The area had been trimmed off now of bushes. Before, there were tall grasses in the area and was difficult to reach.’

Before turning herself to the police, Alina reportedly went back to the same tree, now dressed in a white shirt and long blue pants, with a man ‘to ask for forgiveness’. 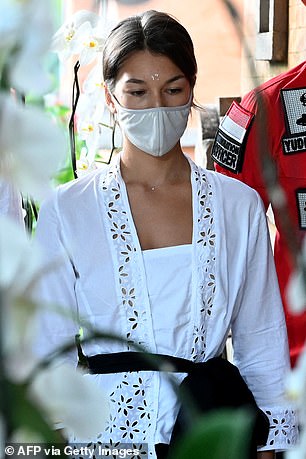 As police investigated the incident, Alina went to the station ‘to cooperate’ but no official charges were filed against the woman

She said: ‘I apologise to all Balinese and Indonesian people, I regret my actions.

‘I’m so embarrassed, I didn’t mean to offend you in any way, I had absolutely no knowledge of this place.

‘I just prayed under a tree and went straight to the police station to explain this incident and apologise.’

Alina also reportedly contacted the local Niluh Djelantik who complained about her to the police to apologise.

Niluh thanked Alina and accepted the apology, but noted that the investigations into the incident should continue.

Kurnya Wijaya, a temple caretaker, said a cleansing ceremony would have to be done ‘to clear the tree of the obscenities’ and urged the woman to shoulder the expenses.

He said: ‘We will hold a cleansing ceremony, probably within the next 20 days.

‘The ceremony would be a form of apology to the temple and clear the tree of the obscenities.

‘I hope the woman would shoulder the expenses and take responsibility. This was not the first time that our temples and sacred grounds were disrespected by tourists.’

The temple caretaker added that they would re-evaluate the temple rules and implement stricter regulations, especially for tourists. 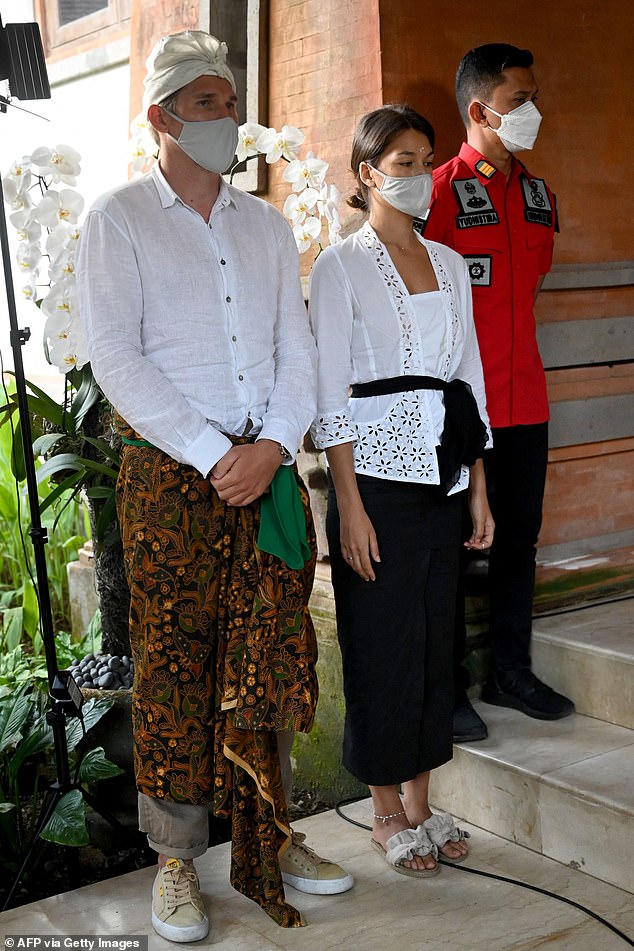 Before turning herself to the police, Alina reportedly went back to the same tree, now dressed in a white shirt and long blue pants, with a man ‘to ask for forgiveness’

He said: ‘This is a holy place, being looked after only by three people. If tourists could not behave themselves while inside, we will be forced to make strict rules for them.’

The investigations are ongoing and would be handled by the immigration officers and the Bali Police directorate.

No charges were filed yet for the woman, but locals believed it could fall under pornography laws.

Indonesia’s draconian pornography law describes pornography as ‘pictures, sketches, photos, writing, voice, sound, moving picture, animation, cartoons, conversation, gestures, or other communications shown in public with salacious content or sexual exploitation that violate the moral values of society’ which warrants of up to 15 years imprisonment and a 2 billion rupiah fine (£110,528).