While many picture Russian internet trolls to be angry, non-English speakers who berate liberals online, it turns out the scammers are actually posing on Twitter as uplifting accounts that build a massive following, before spewing tweets that plant distrust in the White House ahead of the 2020 election.

The experts reveal that Russian operatives use ‘Trojan horse’ tweets that appear to be heartwarming and discuss celebrities and charity work to amass followers, before spewing subtly political messages that create distrust in the American government.

For example, one account @IamTyraJackson started out sharing tweets about an NFL star who gave back to his community by building houses for single mothers. After picking up a following, the same account started to controversial political tweets. 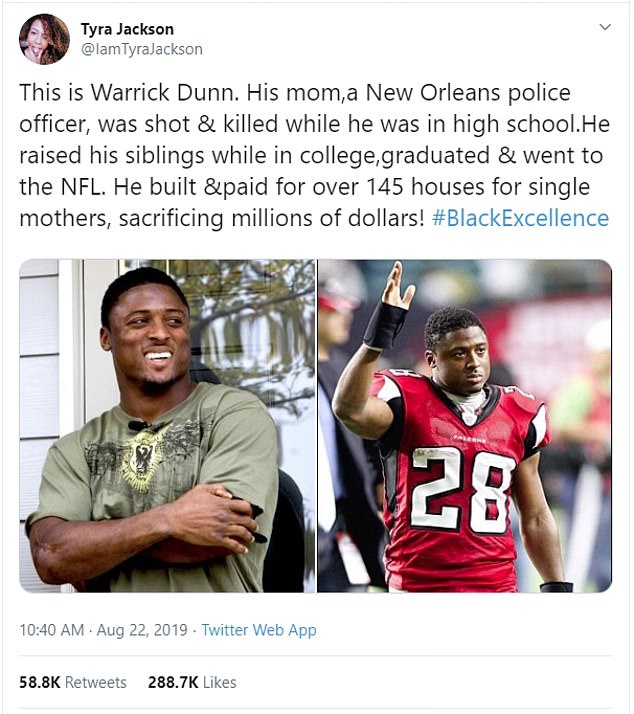 For example, one account @IamTyraJackson started out sharing tweets about an NFL star who gave back to his community by building houses for single mothers before sharing controversial tweets that promoted division and distrust 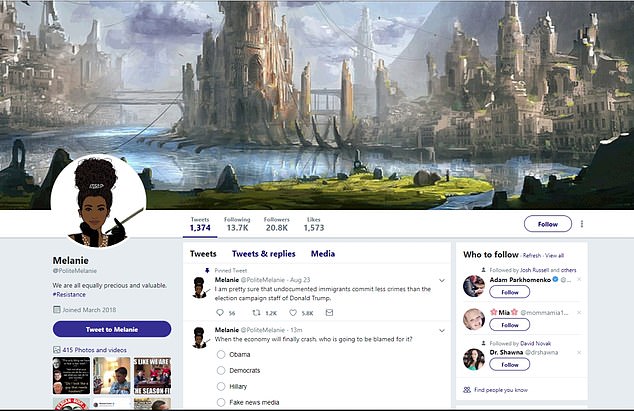 On August 22, 2019 the @IamTyraJackson account went viral amassing nearly 290,000 likes on Twitter – nearly double the average number of likes on one of President Donald Trump’s tweets.

The tweet was two pictures of former NFL star Warrick Dunna and a description of his charity work, praising him as #BlackExcellence.

The anonymous account that existed for just a few months surged in popularity and the tweet about Dunn was retweeted by his former coat as did rapper Chuck D. Hundreds.

Linvill and Warren reveal that these kinds of accounts are run by Russia’s Internet Research Agency – the very group that was at the center of Special Counsel Robert Mueller’s investigation for interference in the 2016 presidential election.

Their good-hearted nature helped them collect a large number of followers that they can later influence with more divisive tweets that cast doubt in the U.S. government.

Their report comes after two years of research and after poring through thousands of Russian tweets and data publicly released from Twitter. Together the researchers and Twitter identified disinformation campaigns and suspended Russian-operated accounts.

‘We believe @IamTyraJackson was an account operated by the successors to Russia’s Internet Research Agency (IRA),’ the report said.

‘Special Counsel Robert Mueller indicted the IRA for waging a massive information war during the 2016 U.S. election. Since then, the IRA seems to have been subsumed into Russia’s Federal News Agency, but its work continues. In the case of @IamTyraJackson, the IRA’s goal was two-fold: Grow an audience in part through heartwarming, inspiring messages, and use that following to spread messages promoting division, distrust, and doubt,’ it added. 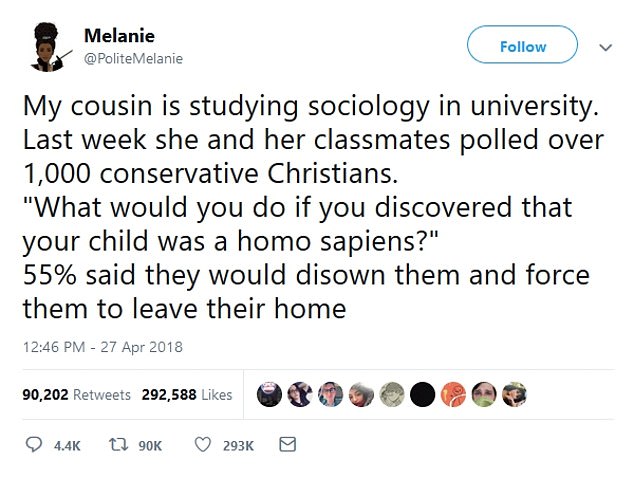 @PoliteMelanie is a Russian-operated account that Linvill and Warren helped shut down. It boasted 20,000 followers and shared tweets like this one that criticized Christian conservatives as homophobic and ignorant to subtly plant division among Twitter users

A similar account controlled by Russian operatives was @PoliteMelanie, which boasted 20,000 followers.

The account was identified in fall 2018 and shared a tweet that said: ‘My cousin is studying sociology in university. Last week she and her classmates polled over 1,000 conservative Christians. “What would you do if you discovered that your child was a homo sapiens?” 55% said they would disown them and force them to leave their home.’

The tweet wasn’t blatantly controversial, but it subtly suggested that conservative Christians are homophobic and ignorant, and was enough to drive a wedge between Twitter users.

Most of @PoliteMelanie’s followers were left-wing Americans, not outspoken #MAGA supporters.

‘These accounts also harness the goodwill they’ve built by engaging in these communities for specific political ends. Consistent with past Russian activity, they attacked moderate politicians as a method of bolstering more polarizing candidates,’ the two experts said.

Other tweets on PoliteMelanie’s account are of a similar political nature.

The account’s pinned tweet said: ‘I am pretty sure that undocumented immigrants commit less crimes than the election campaign staff of Donald Trump.’

Another tweet on the account was a poll that asked: ‘When the economy will finally crash who is going to be blamed for it?’ with answer options being ‘Obama, Democrats, Hillary, Fake News Media’. 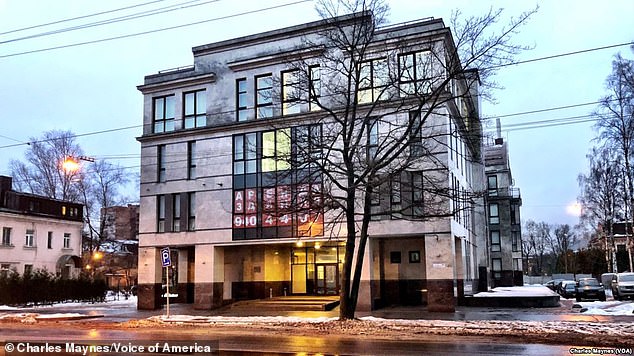 Linvill and Warren reveal that these kinds of accounts are run by Russia’s Internet Research Agency – the very group that was at the center of Special Counsel Robert Mueller’s investigation for interference in the 2016 presidential election. One of the offices of the IRA pictured above St. Petersburg, Russia

‘Professional trolls are good at their job. They have studied us. They understand how to harness our biases (and hashtags) for their own purposes. They know what pressure points to push and how best to drive us to distrust our neighbors….They don’t go to social media looking for a fight; they go looking for new best friends. And they have found them,’ the researchers said.

Linvill and Warren issue a warning in their report saying: ‘We need to learn to question our own and others’ biases on social media.’ 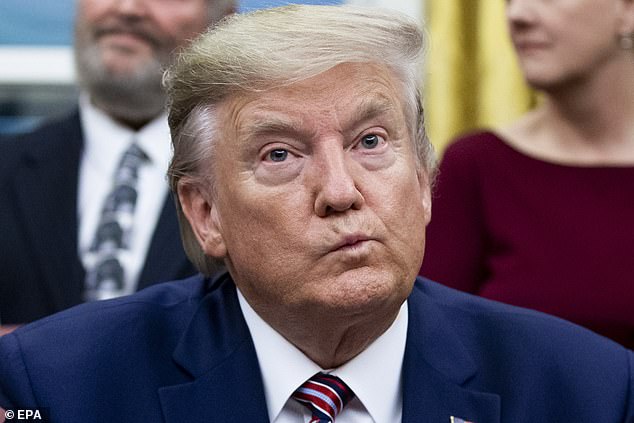 ‘Our research has shown how Russia strategically employed social media to build support on the right for Trump and lower voter turnout on the left for Clinton,’ they said.

However, Russia’s goal, according to these researchers, isn’t to support Donald Trump. The larger agenda is to see the downfall of the American government and the greater democracy.

‘But the IRA was not created to collude with the Trump campaign. They existed well before Trump rode down that escalator and announced his candidacy, and we assume they will exist in some form well after he is gone,’ Linvill and Warren said.

‘Russia’s goals are to further widen existing divisions in the American public and decrease our faith and trust in institutions that help maintain a strong democracy,’ they added.