Fake online accounts run by Russian hackers have been used to whip up the anti-vaccination debate – putting millions of Western children at risk of serious illness.

Experts in the US say countless social media accounts are bombarding parents with anti-vaccination messages.

The tactic includes setting up internet robots – or ‘bots’ – to engage the public in a debate about the safety of vaccines.

Some of the accounts were linked to the shadowy St Petersburg firm the Internet Research Agency, which is said to be backed by the Russian government. It has been accused of seeking to influence the 2017 general election in favour of Jeremy Corbyn and the 2016 presidential vote that saw Donald Trump reach the White House.

But this is the first time such an approach has been revealed to be used to influence people’s health decisions. It comes with Europe in the grip of a measles outbreak that experts believe is linked to reluctance to have the measles, mumps and rubella (MMR) vaccine.

The researchers at George Washington University believe that the campaign is seeking to use vaccination as a ‘wedge’ issue, promoting discord in Western society.

Dr Heidi Larson, director of the Vaccine Confidence Project at the London School of Hygiene and Tropical Medicine, said the consequences could be dire. ‘The danger is that this manipulation of information can create anxiety and distrust, leading to vaccine refusal and risking a serious illness or death,’ she said. ‘It should wake up the public to being more critical of the comments they’re reading online.’ 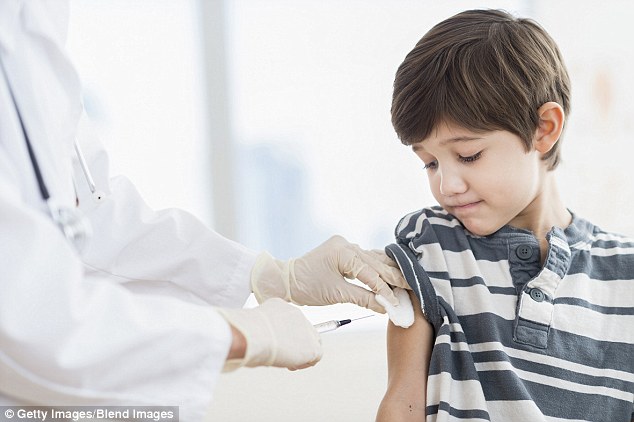 Tweets that the experts flagged up

The more vaccines kids get, the sicker they are and the higher the infant mortality rate.

Did you know vaccines caused autism?

Dead from measles vax – not measles. A far-too-common story re: this benign disease of childhood and its dangerous vax.

Chicken pox and measles are temporary, autism is forever, as far as we know.

Did you know there was a secret government database of vaccine-damaged children?

Pharmacy companies want to develop vaccines for cash, not to prevent deaths

Vaccines can cause serious and sometimes fatal side effects

Most diseases that #vaccines target are relatively harmless in many cases, thus making #vaccines unnecessary

The researchers, whose results were published in the American Journal of Public Health, assessed 1.8million posts on Twitter and found that 3 per cent of all tweets about vaccines were posted by Russian ‘bots’. Many others were posted from Russian accounts deliberately trying to provoke debate.

Study leader David Broniatowski said most of the tweets referenced the MMR vaccine, which was shunned by parents after being linked to autism in a study later discredited. But he also discovered references to virtually every vaccine ever created – and even a few that do not exist.

Uptake remains low in European countries such as Italy – where the latest measles outbreak has been fierce.

Professor Mark Dredze, a professor of computer science and fellow team member, said of the tweets: ‘They erode public trust in vaccination, exposing us all to the risk of infectious diseases. Viruses don’t respect national boundaries.’