Russian twitter bots pumped out a barrage of messages in a bid to swing the General Election for Jeremy Corbyn, new research has reportedly found.

Around 6,500 automated accounts sent messages praising Mr Corbyn and his policies in the closing stages of last year’s election, the study found.

They pumped out messages praising the Labour leader at election rallies – which became a big draw in the campaign, and praising his manifesto.

They also attacked Theresa May for refusing to take part in the televised election debates and slammed her for cutting police numbers in the wake of the Manchester bombing.

The tweets climaxed on polling day when they urged voters to get out and back Mr Corbyn for leader.

The research, compiled by Swansea University and The Sunday Times,  found nine out of 10 messages from the bots about Labour backed the party.

Around 6,500 automated accounts sent messages praising Jeremy Corbyn (pictured yesterday in Grimsby)  and his policies in the closing stages of last year’s election, the study found

In stark contrast, nine out of 10 tweets about the Conservatives were hostile.

Mr Corbyn has faced repeated criticism for his failure to condemn Russian President Vladimir Putin directly for the Salisbury poison attack, which left Sergei Skripal and his daughter Yulia fighting for heir lives.

While he has also faced criticism for not taking a tougher stance on Russian interference in the war in Syria and its role in propping up the murderous dictator Bashar Assad.

‘It is absolutely unacceptable for any nation to attempt to interfere in the democratic elections of another country.

‘The social media companies need to act to safeguard our democratic discourse and reveal what they know.’

The findings have sparked alarm as they are the first evidence that Moscow was trying to interfered directly in British democracy.

And while it is hard to know if the messages actually influenced how people voted, they highlight the danger of unverified accounts on the site.

The Russian accounts were robots but used fake female names to masqueraded as human, the newspaper reported.

What core messages did the Twitter bots pump out i the election?

Here are some pf the core messages they were trying to get out:

Academics said the fake accounts identified are just the tip of the iceberg and demanded Twitter launch a full investigation.

Some 80 per cent of the automated accounts had been created in the weeks before the vote on June 8.

And there was a stark surge in the number of messages pumped out at key points in the election campaign.

Damian Collins, the Tory MP who chairs the culture select committee, said: ‘Any Russian interference in the politics of the UK is a breach of our election law and something we’ve got to act to stop.’

Russia has already been accused of trying to interfere in the US presidential election to back Donald Trump.

Professor Oleksandr Talavera, the Swansea University economist who collected the data, said: ‘The samples provide evidence that Russian language bots were used deliberately to try to influence the election in favour of Labour and against the Conservatives.

‘The data represents just a small random sample and therefore the Russian language automated bot behaviour we have observed is likely to be only the tip of the iceberg of their general election operation.’

Hundreds of the Twitter accounts were created simultaneously and displayed clear identifying factors.

This included the use of 15-character alphanumeric user names with a false western woman’s name attached — even though they listed their first language as Russian. 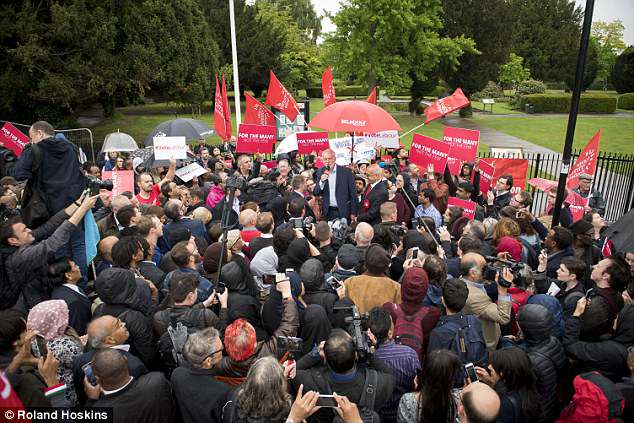 Jeremy Corbyn, pictured addressing a crowd on a drizzly day in the general election. The Labour leader managed to attract huge crowds to his rallies across the country, but research out today says that Twitter bots may have played a part inf fuelling his popularity

At times, they tweeted the exact same messages at the same times.

A Labour Party spokesman said: ‘Labour’s proposed crackdown on tax dodging, failed privatisation and corrupt oligarchs is opposed by both May and Putin’s conservative philosophy and their super-rich supporters.