Russians today began a marathon seven-day vote on constitutional reforms that will allow Vladimir Putin to stay in power until 2036.

Officials have been pulling out all the stops for people to go out and vote on the amendments which will provide the 67-year-old president with another two six-year terms during which he will break Josef Stalin’s record of 30 years in power.

The former KGB operative has held the reins either president or prime minister since 1999, and has not ruled out running again, but says he has not taken a final decision.

Critics say the plebiscite is a sham and believe he intends to cling to power like elderly Soviet leader Leonid Brezhnev who died in office. 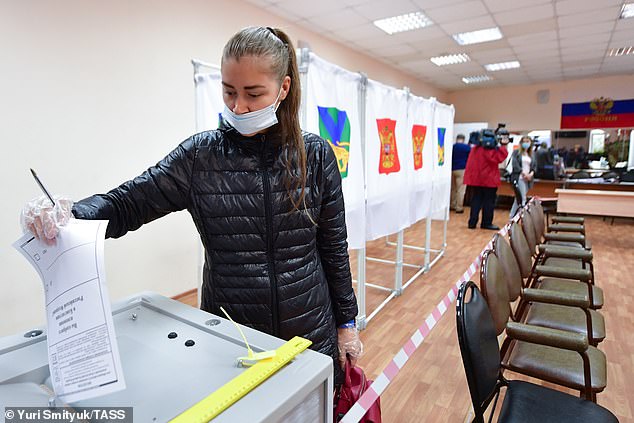 A woman in a face mask casts her vote at a polling station during the 2020 Russian constitutional referendum, in the city of Vladivostok, in Russias Far East

Others say Putin is keeping his options open so as no to become a lame duck ahead of 2024 and may yet still hand over the reins to a handpicked but currently unknown successor.

The country’s divided opposition has failed to mobilise a significant protest amid the audacious election campaign which was given a boost by yesterday’s patriotic parades for the 75th anniversary of victory over the Nazis.

Critics are instead raising concerns about the vote’s legitimacy.

‘Nothing will prevent the Kremlin from getting the formal result they need,’ said former Kremlin speechwriter-turned-political analyst Abbas Gallyamov.

As well as the amendments to term lengths, others talk about improving social benefits and effectively ban same-sex marriage, tapping into the country’s social conservatism and concerns about plummeting incomes.

The amendments have already been approved by both houses of parliament, the country’s Constitutional Court and were signed into law by Putin, and the vote is seen as an effort to put a veneer of democracy on the controversial changes.

Putin says he’s sure the ‘absolute majority’ of Russians approve of them. 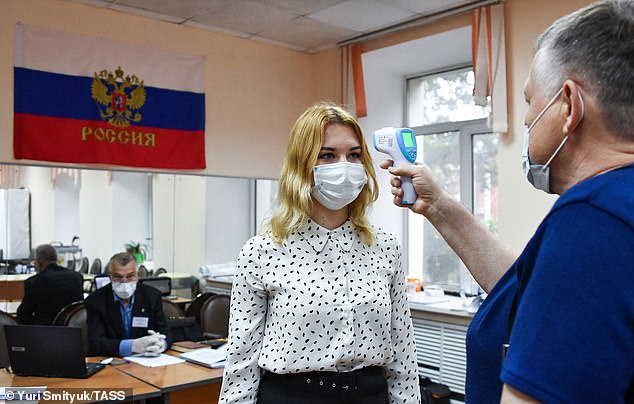 Temperature screening at a polling station during the 2020 Russian constitutional referendum, in the city of Vladivostok, in Russias Far East. Most regions of Russia will vote in the referendum on proposed amendments to the Russian Constitution from 25 June to 1 July 2020 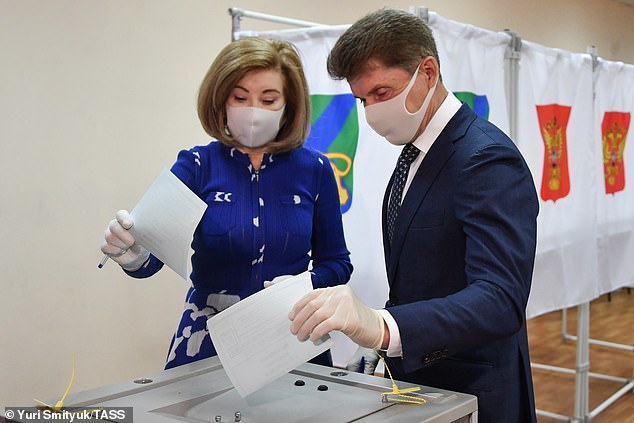 Primorye Territory Governor Oleg Kozhemyako with wife Irina Gerasimenko wear face masks and gloves as they cast their votes a polling station during the 2020 Russian constitutional referendum, in the city of Vladivostok, in Russias Far East 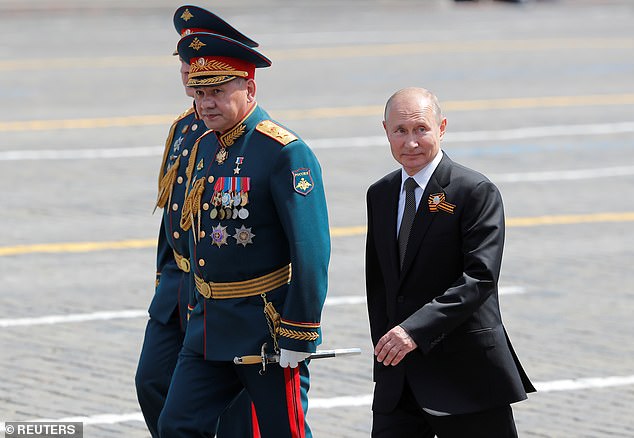 According to the Levada independent polling centre, 44% of Russians said in late May they would vote ‘yes,’ and 32% would vote ‘no’ but only 25% of the ‘no’ respondents planned to vote.

‘Those who don’t support the amendments are not mobilised. (They are) demoralised and don’t know what to do,’ said Denis Volkov, a sociologist with the Levada Center.

The opposition has sent mixed signals. Its best-known figure, Alexei Navalny, has dismissed the vote as illegitimate, saying it doesn’t make sense to participate, even if voting against the amendments.

‘Do you want to go and vote “no”? This strategy seems naive and a bit laughable to me. But if that’s what your heart wants – go and vote “no.” The main thing is to not recognize (the vote’s legitimacy), because it’s a scam,’ Navalny said on his YouTube channel. 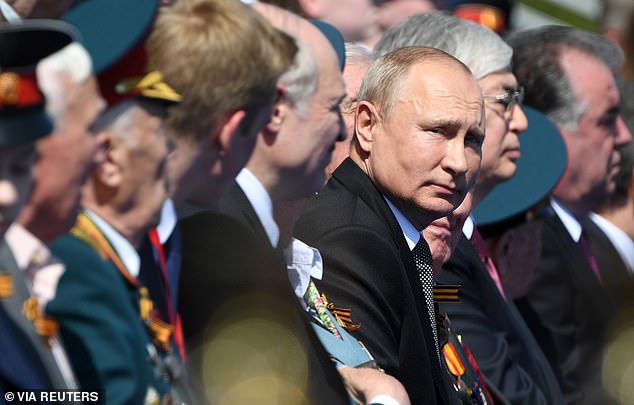 Russia’s President Vladimir Putin attends the Victory Day Parade in Red Square in Moscow on Wednesday. Ahead of the parade, he slammed the West for ‘insulting Russia’ by playing down the USSR’s role in winning the war. 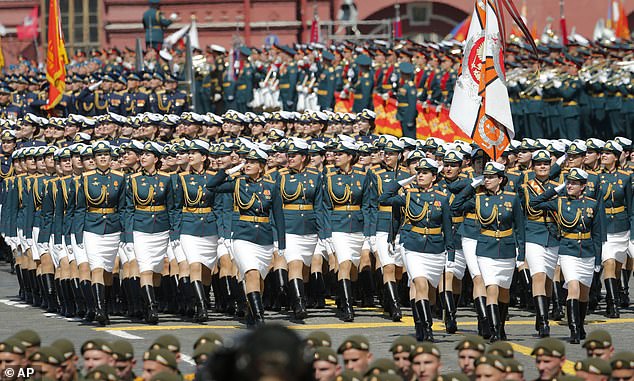 Russian servicewoman salute as they walk in front of President Vladimir Putin, his guests and Russian dignitaries in Moscow’s Red Square on Wednesday for the 75th anniversary of the Nazi defeat 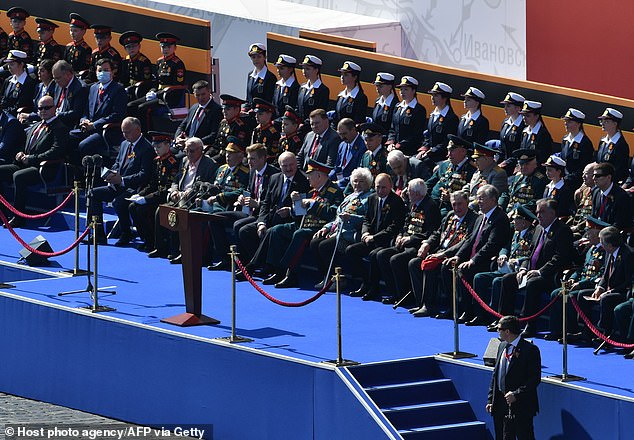 Russian President Vladimir Putin and guests waiting to watch a military parade. Prior to the start of the event Russian media had claimed that war veterans quarantined ahead of the event in sanatoriums will be seated at intervals in the stands on Red Square.

Navalny’s team has backed a strike by election workers who don’t want to risk contracting coronavirus at polling stations.

But the strikers admit they haven’t gained much traction – an open letter has so far gathered a little over 500 signatures. In Moscow alone, there are about 2,000 workers, said Sergei Lebedev, who signed the letter, adding that he had expected more support.

‘Reporters often ask whether we want to derail the vote. Of course not,’ he said, adding he doubted that enough poll workers would strike.

The vote was set for April but was postponed due to the pandemic. Putin rescheduled the vote to conclude by July 1, saying that Russia has passed the peak of its outbreak, even as the number of new infections still hovers around 9,000 a day.

Some Moscow politicians and journalists launched a ‘No!’ campaign against the amendments, but the virus lockdown prohibited rallies, and authorities have detained even single pickets.

Most of the operations took place online. Live YouTube rallies and hashtag campaigns on social media revealed that a significant number of people don’t support the amendments, said Yulia Galyamina, one of the founders of ‘No!’

However, she admitted it could not compete with the Kremlin’s operation. 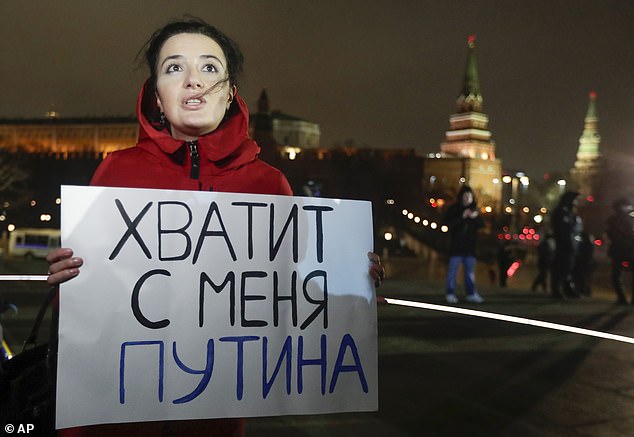 In this file photo taken on Wednesday, March 11, 2020, A protester holds a poster that reads: ‘Enough Putin for me’, in front of the monument of the Prince Vladimir next to the Kremlin in Moscow

‘Society is under the influence of ubiquitous (state) propaganda. We have neither the resources, nor the opportunity, to organise propaganda of this scale,’ Galyamina said. 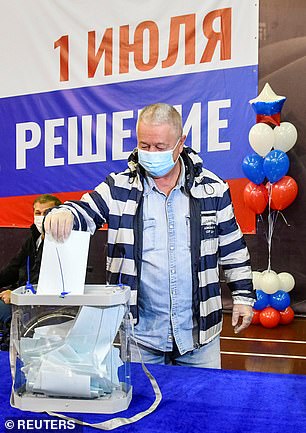 A man casts his ballot at a polling station during a seven-day vote for constitutional reforms in Vladivostok, Russia, June 25

The biggest problem vote organisers face is turnout – luring people to the polls after weeks of coronavirus lockdowns and at a time when public support for Putin is dwindling: In April and May, his traditionally high approval ratings reached an all-time low of 59%, according to the Levada Center.

Authorities have turned to using incentives. In the Siberian Krasnoyarsk region, a constitutional quiz has been organised – conveniently near polling stations – with top prizes of a car or an apartment. Moscow authorities have allocated 10 billion rubles (£116 million) for gift certificates to shops and restaurants for voters.

There also have been appeals to patriotism and even homophobia. One video used gay stereotypes to promote the message that without the amendments, same-sex couples would be able to adopt children.

Critics say the way the vote has been organised leaves room for manipulation and fraud.

To keep big crowds from forming, polls will be open for seven days through July 1.

It’s not clear who will keep an eye on ballot boxes during regular disinfection breaks, when everyone, including poll workers and monitors, must leave the premises. 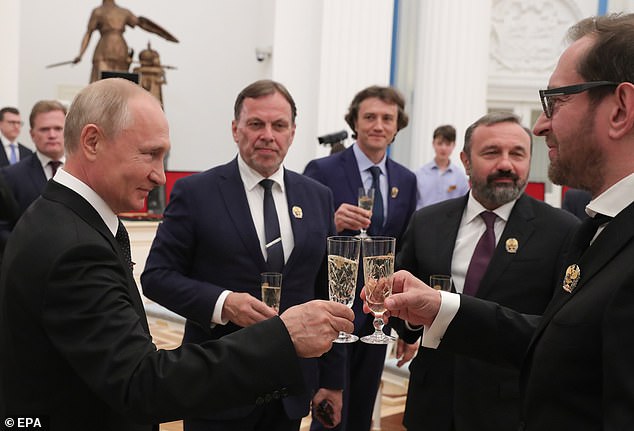 Russian President Vladimir Putin (L) raises glasses after a ceremony to present Russian National Awards for outstanding achievements in science and technology, literature and the arts, humanitarian activity, charity work and human rights at the Kremlin in Moscow, Russia, 24 June

There also will be fewer independent monitors because more bureaucratic hurdles have been added.

Online voting has also been allowed in the Moscow and Nizhny Novgorod regions, which have a combined population of nearly 16 million.

‘The whole procedure from start to finish is aimed at covering up rigging, which will be very convenient to carry out,’ says Grigory Melkonyants, co-chair of the independent election monitoring group Golos.

Critics say those tactics reflect the government’s struggle to mobilise supporters. They note that social media posts from celebrities supporting the amendments have been flooded with comments against them.

The opposition has shifted its focus to exposing potential vote fraud.

‘The result of the vote has already been decided. I think they won’t even count anything, they will just declare the result of vote they had prepared,’ opposition politician and Navalny ally Vladimir Milov said on Instagram. 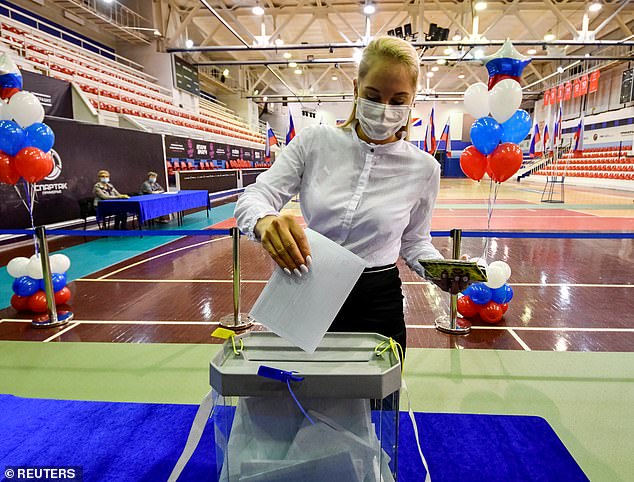 A woman casts her ballot at a polling station during a seven-day vote for constitutional reforms in Vladivostok, Russia, June 25

Milov said the vote can still play into the opposition’s favor because ‘people will see tons of rigging and will get outraged.’

Some anger already is palpable, especially among those pressured to vote by their employers, Melkonyants said.

‘People feel that it’s not being done for them, all these amendments,’ he said. ‘People have this feeling that there is some kind of fraud there.’

Political analyst Gallyamov echoed Milov’s sentiment: ‘The question is whether society will trust the result.’