Russia was accused last night of sending a ‘cynical and tasteless’ letter to the hero policeman exposed to the nerve agent in the Salisbury poisoning attack.

The letter from Russian Ambassador Alexander Yakovenko thanked Detective Sergeant Nick Bailey for his bravery and insisted that Vladimir Putin was not behind the attack.

Mr Yakovenko expressed his ‘sincere gratitude’ to DS Bailey for putting his life at risk by coming to the aid of former double agent Sergei Skripal and his daughter Yulia after they were struck down by a nerve agent.

The diplomat claimed his country was not behind the ‘reckless’ assassination attempt – despite the Government’s insistence that the Novichok nerve agent developed by the Soviet Union was used.

Mr Yakovenko even said he hoped the Skripals would recover.

The news came as it emerged last night that Donald Trump is preparing to expel dozens of Russian spies posing as diplomats from the US.

In the ambassador’s letter, sent on Russian Embassy notepaper to Wiltshire Police headquarters, Mr Yakovenko wrote: ‘Dear Detective Sergeant, I was relieved to hear you were released from hospital and reunited with your family…

‘I would like to express my sincere gratitude to you for your bravery when reacting to the assault on two Russian nationals, Sergey [sic] and Yulia Skripal… who I hope will get well soon too.

‘Please be assured that Russia had nothing to do with this reckless incident.’

But the letter provoked outrage, with Salisbury MP and Treasury Minister John Glen telling The Mail on Sunday last night: ‘It is a pathetic attempt to try to regain respectability when the ambassador knows full well Russia is behind what happened in Salisbury.

‘Most people in Salisbury and across the country will feel this is a cynical attempt to once again deny the truth that this nerve agent derived from Russia.’ 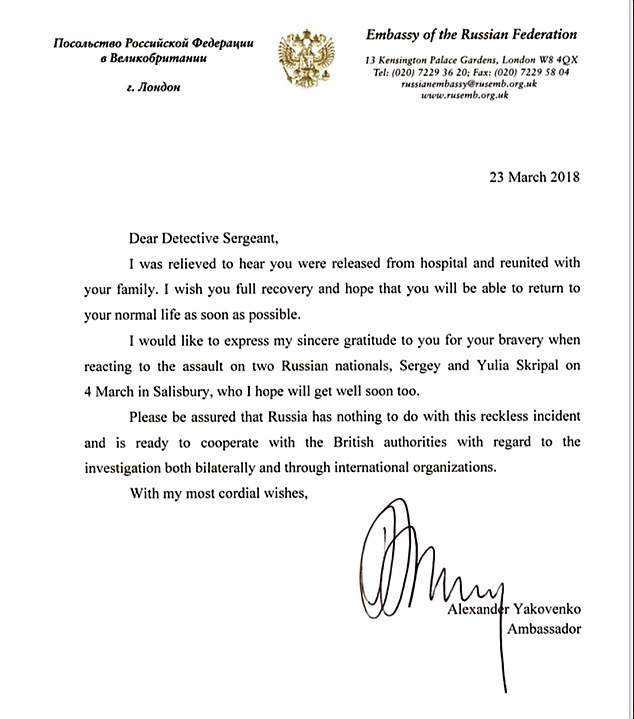 Matthew Dean, leader of Salisbury City Council, said: ‘The ambassador’s letter is in the most appalling taste and demonstrates the most dreadful cynicism.

‘The scientific community across the world is united that the nerve agent was manufactured in Russia.

‘Salisbury residents have been shocked by the attempted murder of the Skripals and the serious injury of a police officer in pursuit of his duties.

‘To now attempt to embroil us in low Russian politics is totally unacceptable.’

DS Bailey, 38, was discharged from Salisbury District Hospital on Thursday but said that life would never be the same for him or his wife Sarah and their two children.

Meanwhile, Mr Skripal, 66, and his 33-year-old daughter remain in a critical condition in hospital, three weeks after they were found slumped on a bench. 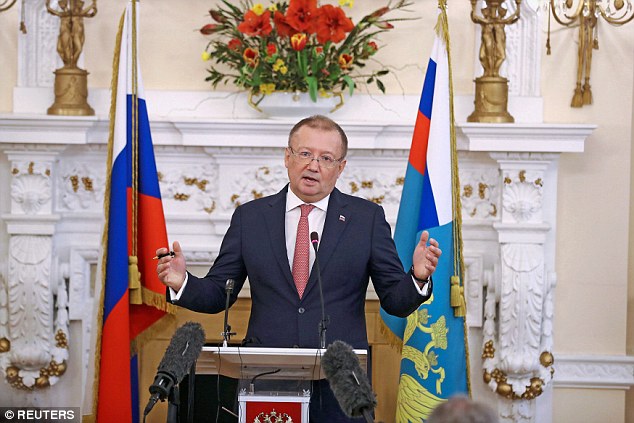 Pictured: Russia’s ambassador to the UK, Alexander Yakovenko in London this week

Mr Skripal is a former Russian intelligence officer who sold secrets to MI6 and was jailed for treason before being freed in a spy swap and coming to live in Salisbury.

Last week a High Court judge ruled that blood samples could be taken from the Skripals so that the Organisation for the Prohibition of Chemical Weapons could verify the analysis by experts at the Porton Down military research centre that they were struck down by a nerve agent.

Mr Justice Williams said it was not practical to ask any relative of the Skripals for their view on the tests given the ‘limited evidence as to the possible existence of family members in Russia’.

However, The Mail on Sunday has tracked down relatives in Siberia and discovered that they are desperate for doctors to give them information. 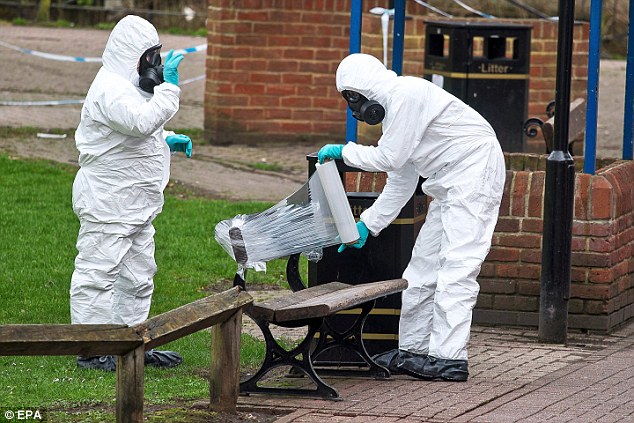 Mr Skripal’s cousin Natalia, 65, said she was like a sister to him while they were growing up.

‘Our whole family, each and every one of us, are incredibly worried for Yulia and Sergei’s health,’ she said.

‘We have been discussing just how to get in touch with the hospital, with none of us understanding how to make the right steps to find their doctor.’

The Russians under threat of expulsion in America are believed to be intelligence officers acting under diplomatic cover, just like the 23 Russian Embassy staff kicked out of Britain last week.

Additional reporting by Will Stewart in Moscow