MOSCOW (AP) – Many university students would be delighted to have the World Cup in town, but not Maria Cheremnova.

The 20-year-old physics student in Moscow is one of thousands of Russians campaigning against the June 14-July 15 soccer tournament, which will disrupt academic life across the country.

A 25,000-capacity fan zone will be built outside the main building at Russia’s prestigious Moscow State University during exam season. In other cities, exams have been brought forward and thousands of police plane to move into dorm room to ensure World Cup security.

In this Wednesday, March 28, 2018 photo, a tourist takes a picture in the area where the fan zone of the Russia Soccer World Cup 2018 will be placed, with Moscow State University main building in the background in Moscow, Russia. At Moscow State University, Russia’s oldest and most prestigious, there will be a 25,000-capacity fan zone outside the main building during exam season, prompting thousands of students to campaign against the tournament. (AP Photo/Pavel Golovkin)

The Moscow fan zone – a public viewing area with a big screen, beer and music – is on prime real estate near the vast Luzhniki arena, the Moscow River and the main university building, a Stalin-era colossus that ranks among the Russian capital’s most recognizable structures.

The building is also home to around 6,500 students. Residents say it doesn’t have great soundproofing.

“I came to university to study, not to watch football and listen to that noise,” Cheremnova said. “Imagine 25,000 people and the events at night. It’ll all be visible, with lights, a big screen, music and fans, who aren’t very quiet guys. It’s going to stop people from sleeping before their exams. It’s just awful.”

It will also mean extra strain on Moscow’s already struggling transport networks – the fan zone is two subway stops from Luzhniki stadium – and fans could damage a nearby nature reserve, Cheremnova claimed.

Moscow State University students and recent graduates have gathered more than 4,600 signatures demanding the fan zone be moved to another location. They said more students and staff would have signed but feared retaliation from the university administration. When attempting to deliver the petition to the rector’s office, security guards blocked the way and elevator access was cut to that floor only, supposedly for repairs.

Russian universities have little tradition of student protest. While they were hotbeds of activism before the Russian Revolution of 1917, in Soviet times access to a college education was closely linked to political loyalty and membership of groups like the Young Communist League.

World Cup organizers have revised earlier plans for Moscow’s fan zone to be larger and closer to the university. FIFA said “to lessen the impact of the event on students and the adjacent infrastructure of the university, it was agreed to move the stage away from the main building by several meters, to reduce the capacity to 25,000 spectators and to change access flows.”

Across Russia, the tournament has brought upheaval for students.

The Russian academic year often runs well into the summer months, and late June is usually the prime time for exams.

In most of the 11 World Cup host cities, university dorms are due to turn into temporary barracks for police and National Guard troops brought in from out of town for the tournament.

Many universities are holding exams early, often by more than a month, to avoid the World Cup and free up dorm space for the security forces.

That means semesters have been cut short with little warning, forcing students to cram more studies into less time. Cheremnova said some Moscow State University students were told to prepare for earlier examinations, only for the decision to be reversed.

At the Southern Federal University in Rostov-on-Don, the semesters have run back-to-back, since “the winter vacation was postponed until the summer period,” according to spokesman Andrei Svechnikov.

What’s angering students more than anything else is the prospect of being forced to move out of rooms they’ve paid for.

Despite promises from the Education and Science Ministry that no students will be kicked out to make way for security forces, more than 2,800 students have signed a petition against alleged removals.

“There will be no forced eviction of students under this process,” the ministry told The Associated Press, adding that security forces will “not disrupt the learning process.”

The AP contacted 17 universities cited in local media reports as planning to evict students for the World Cup. Of those, six said no students would be forced to move, one said a small number would be required to move to other dorms, and 10 failed to reply.

In many cities, students report mixed messages from university officials over accommodation and study schedules.

Zhokhangir Mirzadzhanov, a student in the western city of Kaliningrad, said his university initially offered to buy tickets for students to leave the city and free up dorm space for the tournament, but details about the plan remained unclear.

“There are a lot of simple issues that they still can’t answer,” he said. “What comes next, no one knows.” 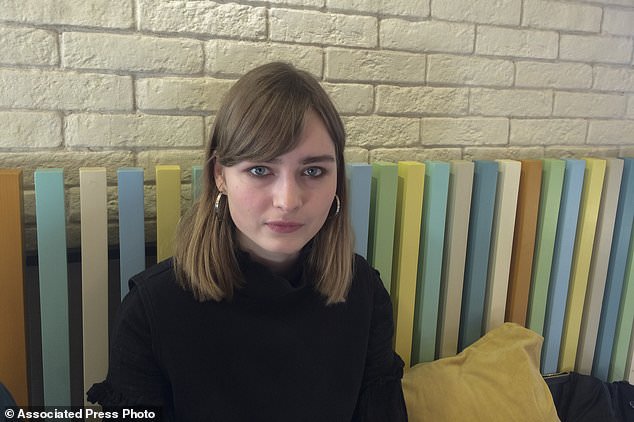 In this Saturday, March 24, 2018 photo, Maria Cheremnova, a 20-year old physics student at MGU who staged a picket to protest the fan zone, poses for a photo in Moscow, Russia. Many students would be delighted to have the World Cup in town, but not Maria Cheremnova who is one of thousands campaigning against the tournament, which is set to disrupt academic life across the country. (AP Photo/James Ellingworth)