Michael O’Leary was slammed for his ‘gung ho’ running of the under-fire airline at its Dublin AGM today where he admitted staff are right to call him a ‘clown’.

Ryanair’s CEO apologised for the ‘major boo boo’ that led to 2,000 flights for up to 400,000 customers being axed over the next six weeks but admitted there might be more cancellations.

Holidaymakers have been left sobbing after being unable to get home, sky-high bills from its premium rate phone line and problems with its refunds service.

The Irish billionaire also faces a revolt by pilots in 33 European airports who have turned down a £12,000 bonus to work before October 31 unless pay and working conditions improve.

Mr O’Leary told the airline’s shareholders that ‘unions are trying to give Ryanair a bloody nose’ but denied any ‘bad relationship’ between bosses and staff and said they ‘don’t want unionisation’.

But he did say they would recruit 125 new pilots over the next fortnight and increase pay for some existing staff.

When asked what he thought about staff on a private WhatApp group referring to him as ‘the Clown’, he said given what had happened with the roster it was an ‘appropriate’ description. 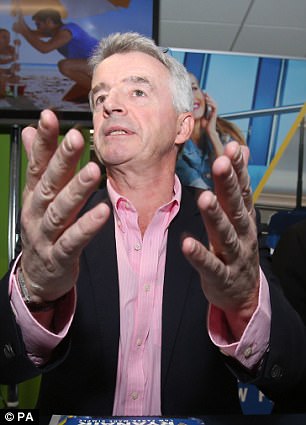 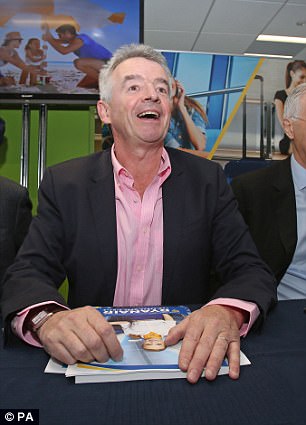 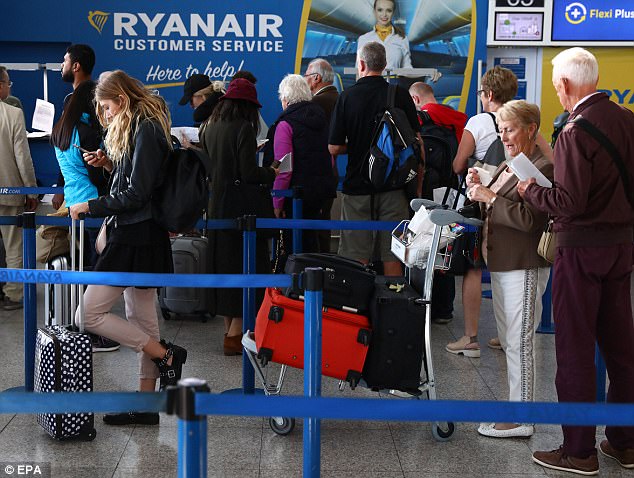 Ryanair is planning to take back one week of its pilots’ holidays to prevent any further flight cancellations, the airline’s chief executive has said.

Michael O’Leary said pilots due to take a four-week block of holidays in the next few months because a change in annual leave rotas will be told to reduce that to three weeks.

He said they will get the other week back in January.

At a meeting with shareholders at the airline’s AGM in Dublin, Mr O’Leary said the airline does not need the agreement of pilots to take back a week of their leave.

He told shareholders six weeks of cancellations, which he previously admitted was a ‘mess’, has cost the airline about 25 million euro (£22 million).

Mr O’Leary again apologised for the disruption, which he said was down to mismanagement of the pilots’ rostering system.

He refused to discuss media reports that many pilots had turned down offers of a 12,000 euro (£10,600) bonus and instead demanded improved contracts.

Its response to the flights cancellation crisis descended into farce yesterday as families complained of having to wait up to nine days for a flight home.

In another day of shame for the airline, furious passengers complained of being stranded abroad and left hundreds of pounds out of pocket.

Holidaymakers reported being reduced to tears after being unable to get home, while many complained of being kept on hold on Ryanair’s premium rate helpline, being given incorrect information, or of problems with its refunds service.

Those forced to ring the company’s helpline face spiralling charges, with one Mail reporter’s call costing more than £30.

And yesterday the airline admitted that around 140,000 passengers whose flights have been cancelled still have not been booked on another flight.

The misery endured by holidaymakers prompted the aviation minister to ramp up the pressure on Ryanair, which has caused further outrage by refusing to rebook passengers on rival airlines. 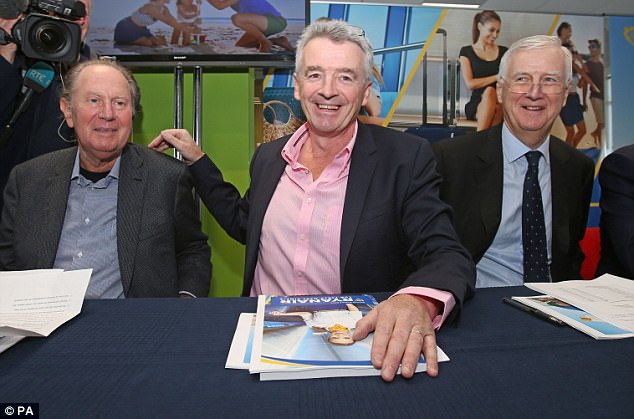 On Monday £500million was wiped off the value of Ireland’s biggest listed company but Mr O’Leary (centre with Directors David Bonderman (left) and Kyran McLaughlin (right), said previously he didn’t ‘give a rats a**’ about the falling share price 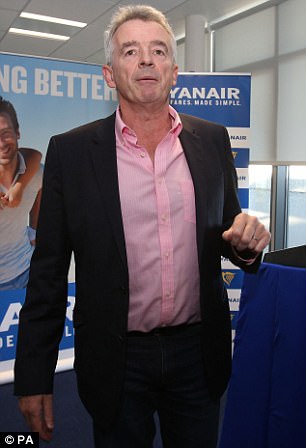 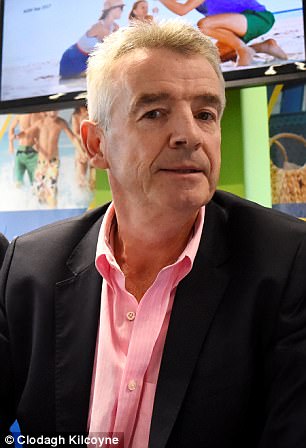 Ryanair’s CEO apologised for the ‘major boo boo’ that led to 2,000 flights for up to 400,000 customers being axed over the next six weeks but admitted there might be more cancellations 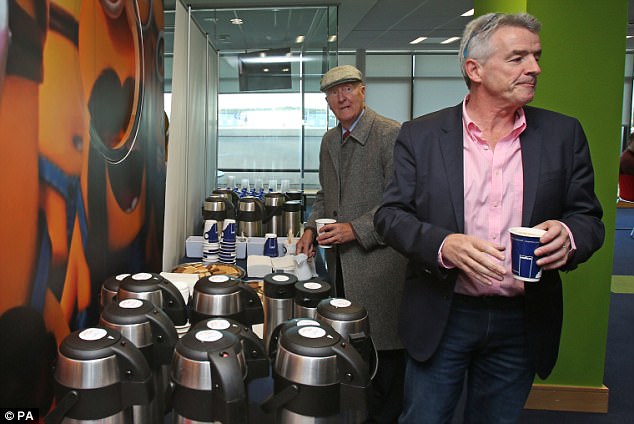 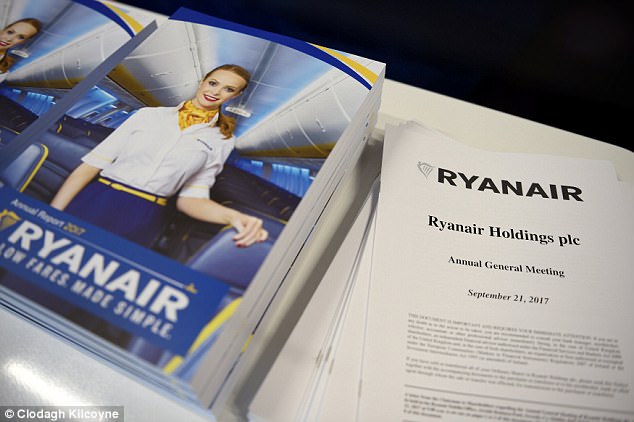 In some cases this has left passengers with the choice of waiting for days for another Ryanair flight or shelling out hundreds of pounds in air fares.

The budget airline’s chief executive Michael O’Leary has claimed the firm is not obliged to rebook passengers on rival airlines under EU rules, adding that it ‘cannot afford to pay the high costs of its competitors’.

But in a strongly worded letter to Mr O’Leary, the Aviation Minister Lord Callanan said he was ‘disappointed about the way Ryanair has dealt with the situation’ and said the airline’s actions have ‘led to disruption and uncertainty for many travellers’.

He added: ‘In the event of any disruption or cancellation, airlines must ensure customers are fully compensated … This includes offering to rebook passengers to flights with other airlines, if this is appropriate.’ The intervention comes after the airline industry watchdog the Civil Aviation Authority also raised fears that Ryanair’s ‘express intention was to fail to meets its obligations’ under EU rules.

If Ryanair backs down, its compensation bill – which it has estimated at £17.7million – could soar.

Customers yesterday described the stress of not knowing how to get home and being forced to spend huge sums of money after getting marooned. Stella Scott, 69, was told six hours before her flight and was offered seats to the UK nine days later, leaving her family, including her three-year-old grandson, stranded.

Rhiannon Hawkins, 19, ‘cried herself to sleep’ after she was forced to cut her week’s holiday in France short having spent £25 waiting for an answer on Ryanair’s helpline.

The airline’s 0871 premium rate helpline charges up to 68p per minute from UK mobiles and more if called from abroad. Ryanair takes 13p per minute from these calls – the maximum allowed under Ofcom rules. On top of that phone companies add their own service charge. For example, EE charges 50p a minute.

It took one reporter 48 minutes to reach an operator after initially dialling the number.

Responding to criticism, a spokesman for Ryanair said: ‘Our reservations number costs 13p per minute and our other UK number is a low-cost local rate number.

‘We ask customers to bear with us as we do everything we can to respond to their requests.’ 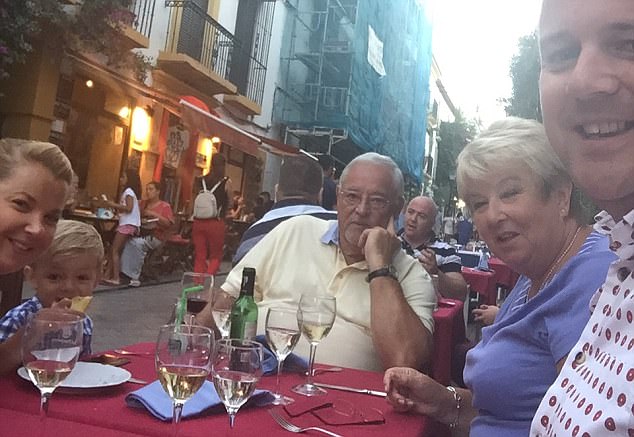 Stella Scott, 69, with her husband Robert, 61, daughter Abby, 36, son-in-law Dave, 34, and grandson Luke, three, in Spain before their Spanish holiday was ruined by Ryanair 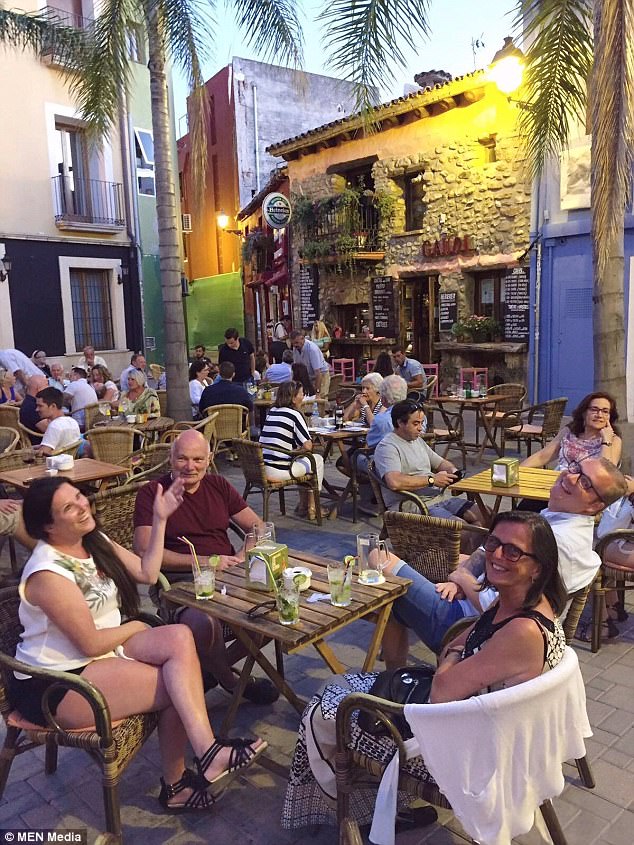 Helen Smith, parents Steve and Debbie Luckett, and Helen’s husband Stephen Smith (left to right) were stranded in Spain after Ryanair cancelled their flight back to Manchester 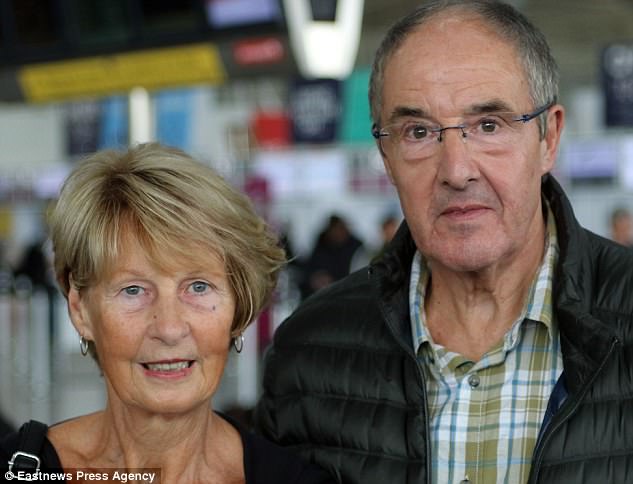 The Dublin-based carrier yesterday said it expected to have booked more than 175,000 customers onto other flights and to have processed refunds for more than 20 per cent of those affected by the end of the day.

What are passengers’ rights when flights are cancelled?

Under EU Regulation 261/2004 holidaymakers have certain rights if their flight is cancelled or delayed.

Firstly airlines must offer an alternative flight or a full refund, if your flight was cancelled.

You can also get a full refund if the flight wasn’t cancelled but was delayed for more than five hours and you no longer wish to travel.

Airlines must also offer you meals, refreshments, and hotel accommodation as appropriate whilst you wait for a rearranged flight for both delays and cancellation.

They should also cover any transport costs between the hotel and the airport.

You should keep any food, transport or accommodation receipts to use when making a claim for compensation.

Here are some of the key questions around the claims process:

EU law protects passengers whose flights are delayed or cancelled under the Denied Boarding Regulation.

This applies to flights either departing from an EU airport or those that are both arriving at an EU airport and operated by an EU airline, such as Ryanair.

Are passengers entitled to a refund?

Yes, passengers can claim a refund from the airline. If they have booked a return flight and the outbound leg is cancelled, they can also claim the full cost of the return ticket.

What if a passenger still wants to travel?

Ryanair must offer an alternative flight as soon as possible after the cancelled flight. This will be ‘at worse’ on the following day, Ryanair said.

Do they get any assistance while they wait?

If less than 14 days notice is given for a cancellation, airline travellers can claim up to 250 euros (£221) under EU regulation 261, depending on the timing of the alternative flight.

Customers given more warning are not entitled to a payout.

No, disrupted passengers must write a letter of complaint to the airline.

They should keep as much evidence as they can, such as boarding cards and receipts to claim expenses.

A template letter can be found on the website of consumer watchdog Which?

Ryanair has already cut as many as 2,000 flights and will leave up to 400,000 passengers stranded over the next six weeks – and revealed today that just under half have new seats and one in five have been handed refunds.

One senior Ryanair pilot told MailOnline: ‘Pilots are now gathering and arranging meetings around Europe. Serious flight crew unrest exists with the possibility of crew action against company, including mass sick days and working to rule.

‘Pilot’s are sick of threatening management conduct. Michael O’Leary fabricates his pilots are well treated – if that’s the case why do they all leave so fast – 719 in the past year’ – a figure used by unions.

MailOnline has been inundated with calls and emails from customers who have been left stranded, broke and bereft because of the airline’s cancellation crisis.

Passengers have described the stress of not knowing how to get home and spending huge sums of money after getting marooned by Ryanair.

Stella Scott, 69, was sent a text six hours before her Malaga flight and was offered seats to Bristol nine days later, leaving her family including three-year-old grandson marooned.

Lynda Lancaster’s granddaughter Rhiannon Hawkins, 19, ‘cried herself to sleep’ after she was forced to cut her week’s holiday in France short having spent £25 waiting for an answer on Ryanair’s helpline.

The airline responded to claims that calls were costing £25 by saying: ‘This £25 call cost claim is untrue. Our UK numbers are not premium rate numbers.

‘Our reservations number costs 13p per minute and our other UK number is a low-cost local rate number. Our chat and email contact channels are completely free’.

Mark Adkins was stuck in Spain with his wife, 11-month old baby and 77-year-old disabled father, who was forced to ‘crawl’ on to a train from Valencia to Barcelona to get a new flight.

He told MailOnline: ‘Ryanair have ruined my son’s first holiday and probably my dad’s last one’.

‘When boarding the flight at Girona airport, our priority seats at the front were taken away and we were spread out at the back, my dad again struggled to get to his seat.

‘I want everyone to know that Ryanair don’t offer any care or consideration for vulnerable passengers like my disabled dad and baby son’.

Today consumer group Which claimed that the airline has broken EU laws over compensation, because there is no sign of the word anywhere in an email sent to affected customers.

Instead there is a link to click if they want to learn more about ‘passenger rights’.

‘It is legally required to spell out compensation rules when a flight is cancelled and, in our view, have so far failed to do that, leaving passengers hunting around for information.

‘This is another blow for the thousands of passengers who have already had to endure huge inconvenience as a result of this fiasco.

‘The airline must now automatically compensate eligible passengers without them having to go through the additional hassle of making a claim.’