Last night it emerged they are preparing to reject a £12,000 cash bonus to persuade them to work during their holiday, raising the prospect of a fresh wave of cancellations for passengers.

In a bid to prevent even more disruption, the airline has offered pilots who are on holiday a tax free bonus of £12,000 if they come to work, with first officers – or co-pilots – offered £6,000.

In a bid to prevent even more disruption, the airline has offered pilots who are on holiday a tax free bonus of £12,000

To qualify they will have to work one or two blocks of five days.

In a desperate attempt to stop more pilots from leaving, the airline has also stipulated they will have to wait until November next year to collect the money.

Those who accept the offer but leave the company before October 31 next year will not receive the bonus.

In a memo sent to pilots who had been given a month off as part of attempts to resolve problems with the holiday rota, Ryanair’s chief operating officer Michael Hickey said: ‘To avoid further cancellations we are requesting between one and two blocks of five days from every pilot who has already been assigned their month off.’

But last night it emerged that Ryanair pilots across Europe are set to refuse the cash offer in protest at the working conditions at the airline.

In a draft letter signed by pilots they have warned they will now ‘work to rule’.

This means they will refuse to work beyond the terms of their contracts to help the airline.

Airlines rely heavily on being able to summon pilots to work on their days off or during their holidays to minimise cancellations if colleagues call in sick or there are problems with the rota. 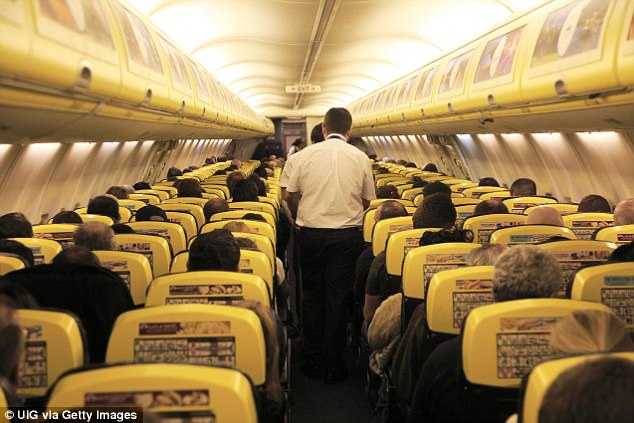 The letter, seen by The Guardian newspaper and circulating at Ryanair bases across Europe states: ‘We would like to advise that with immediate effect the pilot workforce at the bases [airports] listed below rescind the goodwill that has been extended toward the company for many years, including working days off and turning up early.

The letter takes issue with Hickey’s offer on six separate grounds, including that pilots must have worked 800 flight hours in a year to be eligible for the tax-free bonus. This means many will not qualify for the pay-out.

One senior Ryanair pilot said: ‘Pilots are now gathering and arranging meetings around Europe. Serious flight crew unrest exists with the possibility of crew action against company, including mass sick days and working to rule.’

Ryanair pilots are not unionised meaning they risk being fired if they take action.

But the draft letter outlines pilots’ strong bargaining position, saying: ‘The company faces a pilot shortage and even if this is only for a short period of time, the reputational damage that could result […] could be extremely long lasting both in terms of customer and shareholder confidence.’

Ryanair pilots – many of whom were as agency contractors – are expected to demand full employee rights.

The letter states: ‘The continued erosion of the pilots’ terms and conditions over the past 10 to 15 years has to be not only stopped but reversed.’

Ryanair has denied claims that the real reason it has been forced to cancel more than 2000 flights is a shortage of pilots, rather than its failure to sort out the pilot holiday rota.

But trade union the Irish Airline Pilots’ Association has claimed that more than 700 pilots left the company in the financial year ending on March 31 – this is up from just over 400 the previous year.

Former pilots at the airline have also said morale is low among staff and that many want to leave.

Yesterday Brian Strutton, general secretary of the British Airline Pilots Association indicated that the working condition at Ryanair are so poor that many of its 500 unemployed pilot members are reluctant to work there.

He said they would be ‘more than happy to work for Ryanair, should working conditions be improved in the airline’.

He added: ‘We believe these working conditions are leading to pilots leaving the airline after a few years to go work for other airlines. The company needs to be a career airline, where pilots feel valued, not over-stretched.’

Ryanair said it would not comment on ‘rumours and speculation’.