The Bank Holiday plans of up to 250,000 Ryanair passengers hang in the balance amid a furious row over the pay of its pilots.

The budget airline is locked in a bitter dispute with a union over the pay and perks of pilots who are threatening to strike on Thursday and Friday.

Experts warn if the protests go ahead they could disrupt the holiday plans of passengers booked on at least 1,714 Ryanair flights due to depart from UK airports including Stansted, Birmingham, Manchester and Liverpool.

Ryanair is locked in a bitter dispute with a union over the pay and perks of pilots who are threatening to strike on Thursday and Friday. Pictured: CEO Michael O’Leary poses during a press conference in 2017 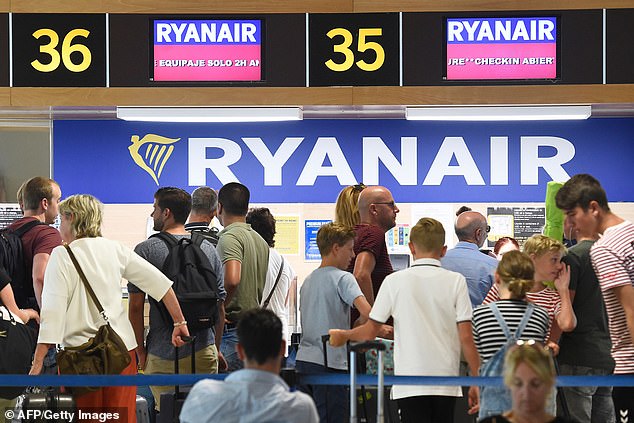 Experts warn if the protests go ahead they could disrupt the holiday plans of passengers booked on at least 1,714 Ryanair at Stansted, Birmingham, Manchester and Liverpool (file image)

Rail passengers planning a bank holiday getaway this weekend are being urged to avoid the East Coast Main Line.

Train operator London North Eastern Railway (LNER) issued a ‘do not travel’ warning for the route between London and Scotland via York on Saturday and Sunday.

King’s Cross will be closed due to Network Rail engineering work, meaning there are no trains between London and Peterborough.

LNER will run a severely restricted service from Scotland and the north of England to Peterborough, but trains will be extremely busy and passengers are advised to reserve a seat or risk having to stand for the journey.

All Grand Central services are cancelled and Hull Trains services will be diverted to run to and from London St Pancras.

Other events and sporting fixtures which will be affected by the rail disruption include Edinburgh Fringe Festival, the York racecourse’s Ebor Festival, Creamfields near Warrington, Manchester Pride, the Ashes cricket Test in Leeds, rugby league’s Challenge Cup final at Wembley, Leeds Festival and a full weekend of football fixtures.

Network Rail said: ‘We are very aware that bank holiday engineering work affects many people who will have wanted to make the most of the long weekend. We do the work then is because it affects far fewer people than a closure on a normal working day.’

But a leaked internal memo claims pilots already enjoy generous basic packages worth six-figure sums when topped up by an array of allowances and bonuses.

The memo details how UK-based captains already receive annual pay packages worth up to £170,000 a year. Ryanair says the union is demanding rises worth between 62 per cent and 121 per cent over two years.

The document focuses on the packages of five UK-based captains at the forefront of the dispute who are all members of Balpa’s Ryanair Company Council.

This council was set up last year to represent Ryanair pilots, after the budget airline finally agreed to recognise trade unions.

The strike has been backed by around 350 of the airline’s 1,250 UK-based pilots.

But Ryanair hopes there will not be ‘significant disruption’ because it has pilots on standby. Another walkout is due to take place between September 2 and September 4.

This could affect many more families flying home before the end of the school holidays, raising the prospect of passengers stranded abroad. Ryanair’s Eddie Wilson said: ‘Balpa should not be disrupting Ryanair’s customers and their families with excessive and unexplained demands for pay increases of between 62 per cent to 121 per cent.’ The details of the packages enjoyed by Ryanair pilots are fiercely disputed by Balpa. It said they had been ‘exaggerated’.