Ryanair has quietly raised the cost of taking two pieces of carry-on luggage on selected flights – just months after bringing in the charge.

The low-cost carrier announced in January that passengers would have to pay £5 for priority boarding to ensure that they could take two bags into the cabin with them. If they don’t pay and turn up to the gate with two bags, the larger one is placed in the hold for free.

However, it appears that the fee to ensure passengers can keep both carry-on bags with them on board has been increased in some cases.

According to Which? Travel there’s an increase of £1 to £6 on certain flights if the customer opts for priority boarding when making their booking online.

Or if they only opt for priority boarding when they check in online, the fee for selected routes raises to £7.

It is unclear which flights have the increased priority boarding fee.

A Ryanair spokesman said prices for priority boarding have increased on certain routes but would not give further details.

He said: ‘Like all businesses, our optional fees can change unlike our fares, which keep coming down.’

It comes just days after MailOnline Travel reported that Ryanair passengers could face more additional charges when they fly because of baggage issues, despite the airline making £5million a day in fees from additional charges. 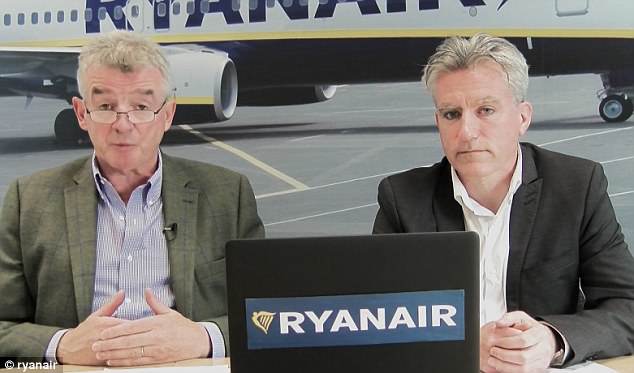 Even seasoned fliers find Ryanair’s baggage policy confusing, so here’s what you need to know.

The point of confusion with the policy centres around the carrier’s assertion that every customer is granted a ‘two free carry-on bag allowance’.

This needs clarification, because what the airline actually means is that all customers can bring two free carry-on bags with them to the airport and up to the gate, but that the larger of the two bags will be transferred at the gate to the hold.

Unless a ‘priority boarding’ fee is paid.

Priority Boarding can be purchased at time of flight booking for £5 or £6 on selected routes. It can be added for £6 or £7 on selected routes up to 30 minutes before scheduled departure time on the Ryanair App.

He explained that upwards of 120 bags are checked at the gate for free – and said it may change. Although he didn’t get to specifics.

He said: ‘[The new baggage policy] is creating a handling issue, particularly at peak periods: bank holiday weekends, summer peak periods. There are many flights where we’re now having to put 100, 120 gate bags free of charge into the hold, so if that continues to build, it’s something we may have to look at again.

‘But there’s no doubt both the feedback from the cabin crew and from customers is that nobody is struggling to find space on board in the bins or under the seats when they board the aircraft, and that’s good.’ 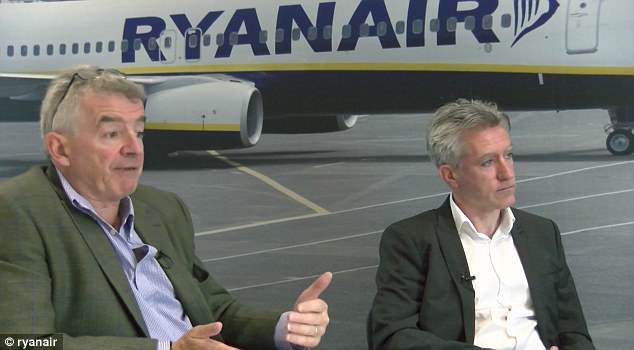 It was estimated that the policy was going to cost the Dublin-based carrier up to 50million euros (£45million) each year.

The airline is also set to slash its free-of-charge check-in time from four days to just 48 hours.

This could increase the likelihood of passengers having to find internet connections while abroad to download return-journey boarding passes on their smartphones, because many currently do this at home before setting off.

The new rules come into effect for departures from June 13 but those who have paid an extra £4 for an assigned seat will still be able to check in 60 days in advance.

It was also revealed recently that the carrier made £1.75billion in ‘ancillary revenues’ last year from the likes of baggage charges, priority boarding, reserved seats and car hire.

Ryanair CEO Michael O’Leary has suggested a number of radical ideas over the years, with many of them never coming to fruition. Here’s a selection of some of his wackier non-starters…

OBESE TAX: In 2009 Ryanair said it was considering an excess weight fee for very large customers after 30,000 people voted in favour of the measure on its website. More than 100,000 passengers gave on-line feedback on various cost-cutting ideas put forward by Ryanair. Almost one in three people polled thought obese and overweight people should be charged more for tickets.

TOILET CHARGE: In 2010 Ryanair announced it was pushing ahead with its controversial idea to start charging for lavatories. It said all onboard toilets would become coin-operated, forcing passengers to pay £1 or one euro. The Irish airline revealed it was also cutting the number of loos, meaning there could only one on planes carrying 189 passengers.

STANDING ROOM ONLY: In 2011 Ryanair said it will introduce ‘standing-room only’ areas on its flights.The low cost carrier announced proposals to install new ‘vertical seats’ on a range of short haul flights. The ‘seats’, which would allow passengers to be ‘strapped in’ while standing up, drew criticism from the Civil Aviation Authority (CAA), which raised doubts over whether they would pass safety tests.

The airline credited some of the growth to the success of its dedicated technology team Ryanair Labs, which has worked on its website and app to increase customers’ take-up of extra services.

The extra charges on top of airfares now make up 28 per cent of Ryanair’s revenue and it said: ‘We are well on track to achieve our five year goal of 30 per cent.’

The €2billion of ancillary revenues revealed in the airline’s results equates to €5.48million a day or £4.81million.

NOT REFUNDING THE DEAD: In 2013 Ryanair apologised after it refused to refund the ticket of a dead passenger because it said she had died too soon before her flight. Beryl Parsons, 78, was due to fly to the Canary Islands with her son and grandchildren for a holiday in October. But in June, four months before the flight, she was unexpectedly told she only had three weeks to live and died.  Her son, Doug, 44, wrote to the budget airline to ask for a refund for his mother’s £230 share of the £1,074 airfares from Stansted to Fuerteventura and included a copy of her death certificate. But it refused because it said Mrs Parsons, who had cancer, had died more than 28 days before the booked flight.

PILOT OUTRAGE: In 2017 Ryanair boss Michael O’Leary reportedly apologised to pilots, offering them incentives to stay with the carrier in a personal letter. O’Leary is said to have asked pilots not to move to rival airlines, promising pay increases, a ‘productivity/loyalty bonus’ and ‘significant improvements’ to contracts and career progression. It followed the cancellation of tens of thousands of flights earlier that year because of errors in how pilots were rostered for work, disrupting the travel plans of 700,000 passengers.