Ryanair told a family of four they would have to wait a week for a plane home and offered them no help with accommodation or costs after cancelling their flight due to the company’s rota chaos.

Stephen and Helen Smith, and Helen’s parents Stephen and Debbie Luckett, were appalled by their treatment when they turned up at Alicante airport to fly back to Manchester after a two-week holiday in Spain.

They ended up having to pay almost £1,000 for seats on an alternative flight with Vueling to Edinburgh, a hotel and the cost of hiring a car to drive back to the North West.

Mr Smith has vowed never to fly with Ryanair again and called the airline’s attitude ‘atrocious’.

The family was not contacted to say their flight had been cancelled before setting out for the airport on Saturday morning and last night had still not received any official communication from the company.

Mr Smith, 33, who works for an energy company, said: ‘We were lucky enough to have the facility to spend what we did on the other flights but how many people are still stranded? It’s a horrendous position for anyone to be in.

‘I cannot believe the sheer lack of effort by Ryanair for an airline which is a big company and supposed centred around customer service.’

Mr Smith, his 34-year-old wife and his in-laws had paid £120 each for their return flights. Mrs Smith’s brother, also called Stephen Luckett, had booked separately, flying with EasyJet, and had no problems with his journey.

Describing the situation at the airport on Saturday, Mr Smith said: ‘We had boarding passes on our phones and they were rejected at security.

‘We thought the problem was with them at first, but we were told to go to the Ryanair desk because there was an issue with the flight.

‘There was a queue forming when we got there. The lady at the front of the queue, who worked for an agency rather than Ryanair, initially gave an excuse that the flight was cancelled for air traffic control reasons over France.

‘I knew that was nonsense because my brother-in-law was flying at the same time and his flight took off without any problem.’

Mr Smith said rostering problems were then mentioned but not in detail.

‘After much debate with the people at the desk, the only thing they could offer was a flight back to Manchester with Ryanair seven days later.

‘There was no way we could afford to do that. We had already had two weeks off, we had booked the leave, and my father-in-law owns his own landscape gardening business so time is money.’

He added that no accommodation or allowances were offered to cover the extra week’s stay. 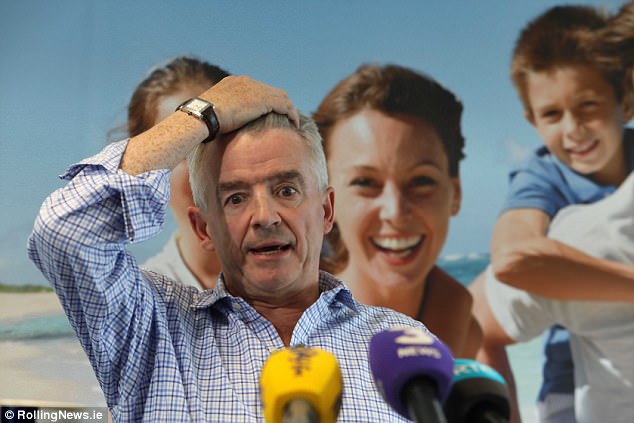 Chief executive Michael O’Leary, who saw his company’s shares fall by three percent knocking around £500million off its market value, admitted: ‘It is clearly a mess’

The 2,024 flights cancelled by Ryanair: Check here to see if you have been affected by the scandal

The family were then offered another option of being put on stand-by for a flight to East Midlands Airport – a two-hour drive from Manchester – but a manager then came out and said stand-by seats were no longer available.

Mr Smith said Ryanair’s last idea was flying from other Spanish airports hundreds of miles away but without any options for transport.

‘The realisation set in that we were being left stranded unless we accepted the offer of a flight in seven days’ time, so we decided to take the matter into our own hands and pay to fly with another airline,’ he added.

Mr Smith said Vueling – owned by British Airways’ parent company International Airlines Group – ‘did more in 10 minutes than Ryanair did in an hour’ to resolve the family’s predicament.

He added: ‘I work for a company for which customer service is very important. Ryanair was atrocious. To treat people the way they did would be unheard of. We’ll never use them again.’

Mr Smith, from Stockport, said his family flew back to Edinburgh on Saturday night and returned home on Sunday.