Ryanair ‘refused to let a severely autistic boy, 15, on a flight from Alicante after trying to charge his family a £25 carry-on fee for the teenager’s comfort doll’

Helen Estella, from Doncaster, claims her son Leo suffered a ‘meltdown’ due to the way he was treated, with airport staff even calling police

A mother has branded Ryanair a ‘disgrace’ after claiming her 15-year-old autistic son was barred from taking a flight after staff tried to charge a £25 carry-on fee for a comfort doll.

Helen Estella, from Doncaster, claims her son Leo suffered a ‘meltdown’ due to the way he was treated, with airport staff even calling police.

Leo, who was travelling with his carer, had tried to board a UK-bound flight from Alicante airport on Saturday evening.

She claimed staff demanded payment for his doll because it was classed as hand luggage.

Ms Estella says Leo – who has a mental capacity of a three-year-old – became ‘distressed’ when they refused to let him have his doll, with four or five police officers called to the scene as the row escalated.

She claims the officers ‘physically touched’ the teenager causing him to have ‘a huge autistic meltdown’ and he was them prevented from boarding the flight. 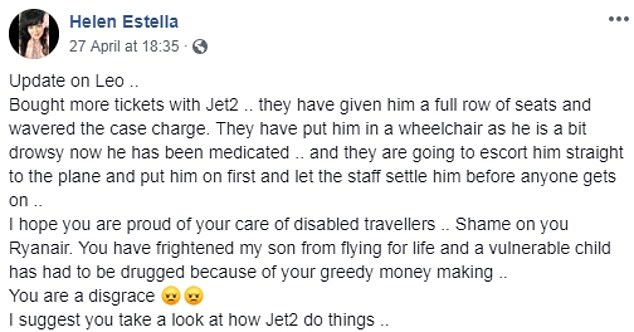 Ms Estella described the traumatic incident on Facebook, where other users slammed Ryanair

Leo had to be taken to the airport doctor and given medication and because Ryanair didn’t offer an alternative flight until Tuesday his carer was forced to buy new tickets on Jet2.

Ms Estella also claims she’d requested special assistance for Leo but had been refused ‘because he can walk’ and she blasted the company’s ‘ignorant actions’ – saying his carer had even been wearing a Lanyard which is used to alert airport staff to a non-visible disability.

Writing on Facebook, she said: ‘My poor Leo is at Alicante airport and they wanted to charge to take his doll on board.. he has had a huge autistic meltdown and they have brought 5 police to him and refused to let him on the flight!

‘He is now petrified and stuck in Alicante.. Shame on you Ryanair you are a disgrace!! His carer requested special assistance but Ryanair declined it because he can walk!!!..

‘NOT ALL DISABILITIES ARE VISIBLE YOU UTTER IDIOTS!!!! utter disgrace.’

She later posted a picture of Leo and his doll on their way home, saying that if staff had ‘any autism awareness they would have know this would always escalate to a meltdown’. 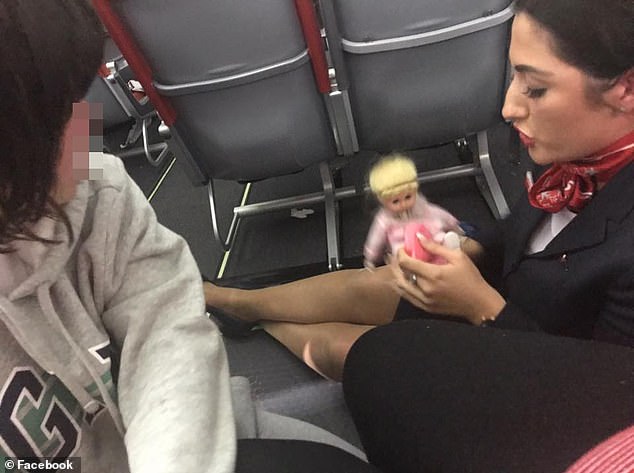 Leo had to be taken to the airport doctor and given medication and because Ryanair didn’t offer an alternative flight until Tuesday his carer was forced to buy new tickets on a Jet2 flight, where he was helped by staff (pictured with the comfort doll)

The ‘ignorant actions of Ryanair and ground staff escalated this situation’, she added.

Her comments, which have shared more than 61,000 times on Facebook, prompted social-media users to offer their support.

One wrote: ‘Ryanair compassion caring and common decency cost nothing is that why you have none?’

Another added: ‘ Ryanair cheap flights but cheap customer services Should be hit with a massive fine for this disgusting discrimination Give them a taste of their own medicine of fining passengers Who fly with them for extra luggage etc’. 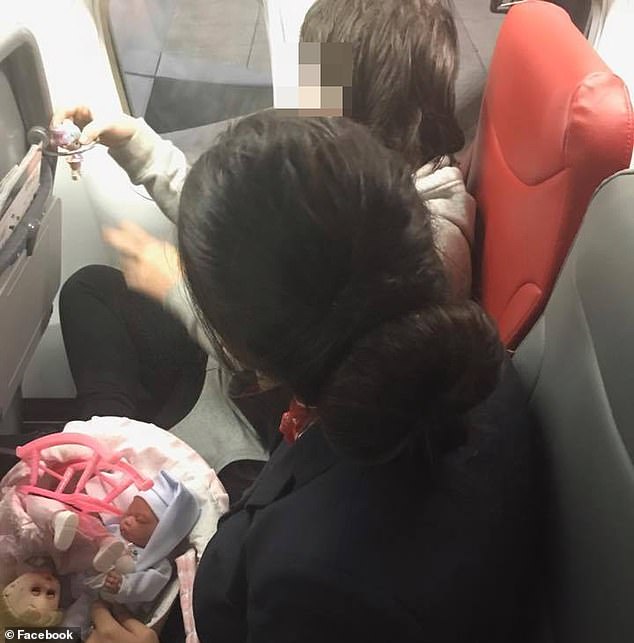