Rylan responds to speculation that Strictly 2020 could be CANCELLED

Rylan Clark-Neal has had a busy year recording his second series of Supermarket Sweep and preparing for the next series of Strictly Come Dancing.

In an exclusive chat with MailOnline, the TV presenter, 31, responded to speculation that the upcoming series will be cancelled, which contestant he is most excited to watch dancing, and his take on the show’s first same-sex couple.

During an interview to discuss his new collaboration with Amazon, Rylan confirmed the hit BBC show will be prioritising safety in the wake of a second lockdown.

Wow: Rylan Clark-Neal has had a busy year recording his second series of Supermarket Sweep and preparing for the next series of Strictly Come Dancing

Rylan told MailOnline: ‘If Strictly can’t go ahead for whatever reason, of course it won’t.

‘The main thing that Strictly and the BBC have said since day one is, if we can’t do it properly and safely, it’s not going to be done. As far as I know at the moment, it’s all still going ahead and we are really looking forward to it.

The TV presenter said the show will put social-distancing measures into place, but they will use technical wizardry when filming to make sure the show will look the same for viewers.

He added: ‘For those watching at home, it’s still going to feel like the Strictly everyone knows and loves.’ 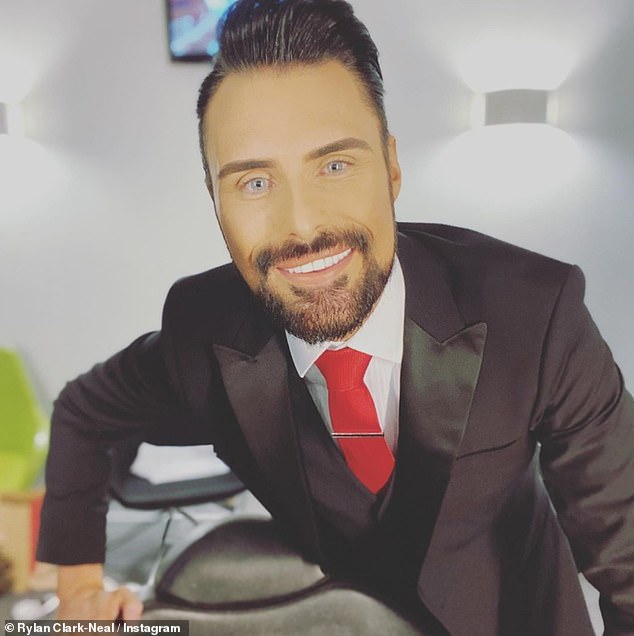 Spilling secrets: The TV presenter, 31, responded to speculation that the upcoming series of Strictly will be cancelled, and the contestant he is most excited to watch dancing

‘But of course, if the current restrictions change, there’s no way the BBC would go against the law, but I think that’s the same for every live TV show at the moment.

‘Who knows, we’ll have to wait and see, but fingers crossed. Things are changing daily and no one knows what’s going to happen.’

In September, it was confirmed that ex-boxer Nicola Adams will feature as the contestant in Strictly’s first same-sex couple.

Rylan thinks the show’s inclusive approach is a great step towards embracing the LGBTQ community. 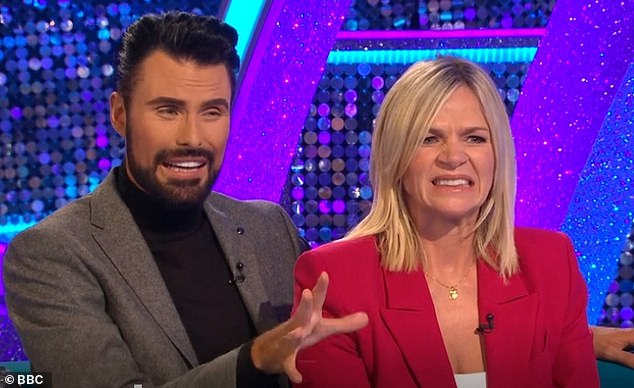 Phew! On Monday, it was announced that this year’s Strictly could be cancelled if Britain goes into a second full lockdown and Rylan responded: ‘As far as I know, it’s all still going ahead’

He said: ‘It’s really exciting, but I think it will be like Dancing On Ice with Ian “H” Watkins and Matt Evers, in the sense that they were a great addition, but after the first week, their same-sex pairing became the norm.

‘It’s never been done before on Strictly so it’s going to be a big deal and I think it’s a really good step towards normalising it.

‘She [Nicola] will be treated like every other contestant and that’s how it should be. I think it’s a really massive step forward.’

Jamie Lang, Clara Amfo and Bill Bailey are among the 12 confirmed celebrities expected to appear on this year’s show. 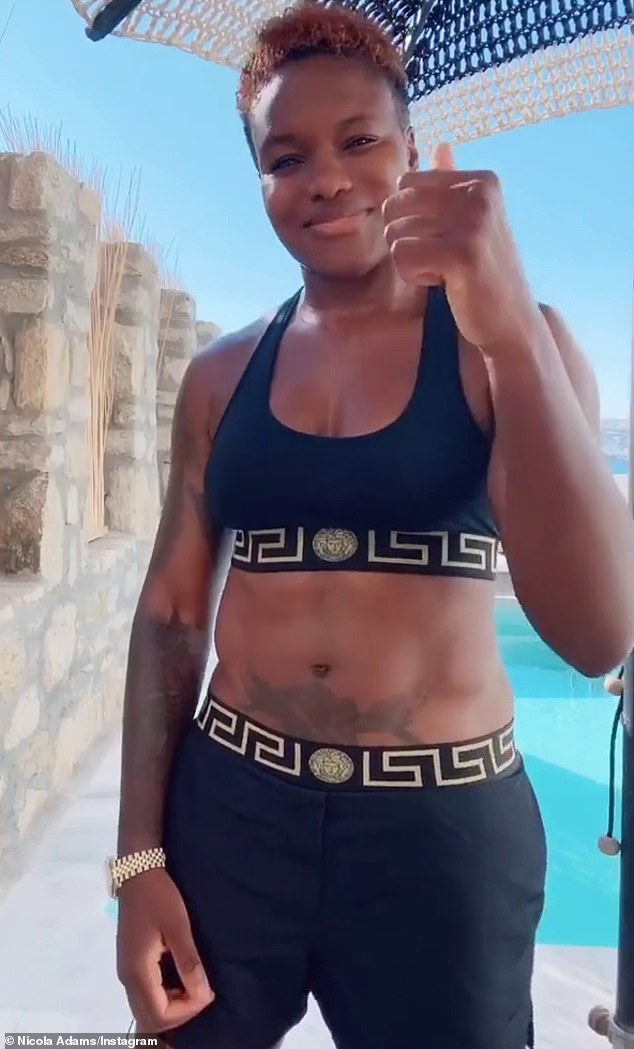 Making changes: In September it was confirmed that ex-boxer Nicola Adams will feature in the show’s first same-sex couple which Rylan believes is: ‘a massive step forward’

The It Takes Two host disclosed which surprising celebrity he is most excited to see take centre stage.

He said: ‘I’m really looking forward to meeting Caroline Quentin because I’ve always been quite a big fan of hers.

‘I’m looking forward to chatting to her, and she’s the sort of person I wouldn’t expect to be announced as a contestant on Strictly Come Dancing, but that’s what’s great about the show, discovering surprising contestants .

‘But you never really know what’s going to happen on the Strictly, so I’m looking forward to meeting all the new contestant as anything can happen.’

Rylan has become a staple on small screens across the nation as he also appears on the second series of the TV classic reboot, Supermarket Sweep, this month. 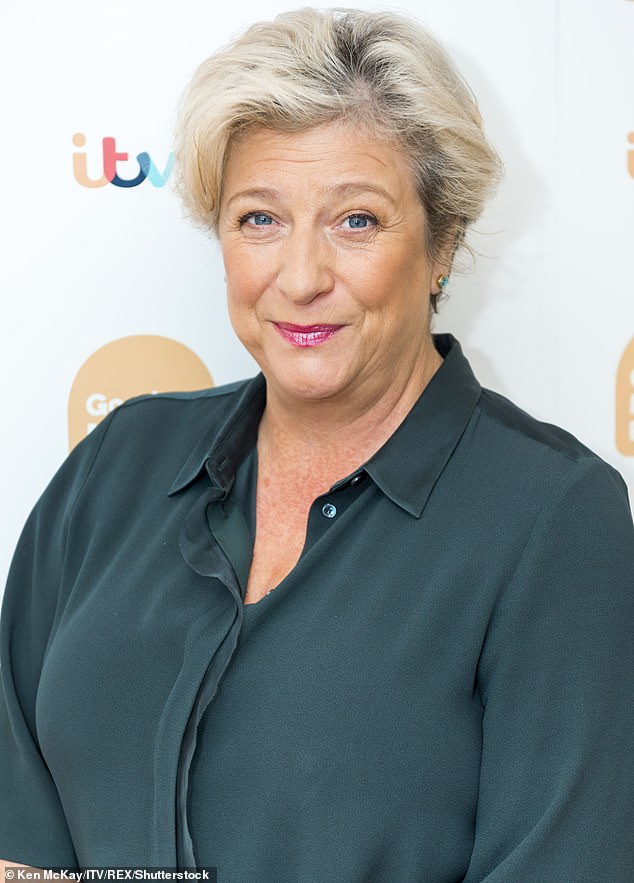 A big fan: According to the It Takes Two host, he is most excited to see Caroline Quentin take centre stage in the Strictly ballroom

The ITV show launched at the start of September and has a host of celebrities lined up for the upcoming celebrity edition, including Denise Van Outen, Scarlett Moffatt and Jacqueline Jossa.

Rylan confirmed there are lots of surprising moments for viewers to look forward to as he said: ‘During the celeb run, there was such a big shock.

‘I always say it’s not about how much time you’ve got, it’s about how well you use it to shop, and there is a prime example in one of the celeb episodes!

‘Someone was so bad at the questions, so bad at the general knowledge and literally had hardly any time on the clock,  but they absolutely smashed it in the big sweep.

‘If there was ever a moment to show what Supermarket Sweep is all about, it is that episode, and that is coming up soon. I can’t say who it was, but look out for a couple!’

The TV presenter has teamed up with Amazon to promote Amazon Prime Day on and October 13 and 14. 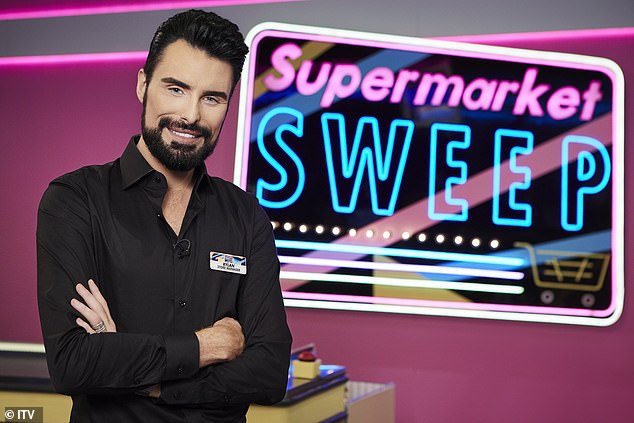 Stay tuned: Rylan confirmed there are lots of surprising moments for viewers to look forward to in the second series of Supermarket Sweep which returned to TV in September

Prime members who spend £10 with select small businesses selling on Amazon from now through to Monday 12 October will earn £10 to spend on Prime Day.

As Rylan went to check out one of the small businesses featured on the e-commerce website, he was taken aback by a coincidental incident.

He revealed: ‘I went and met one of the businesses last week, it’s called Sandy Leaf Farm, they sell make-your-own kits including an artisan gin making gift.

‘The second that I walked in, it was really strange, I noticed the kit that I had brought for my in-laws last Christmas!

‘I had presumed it was from a big company on Amazon, I had no idea it was a small business so it was really nice to speak to the people who had the idea and set it up.’

Amazon Prime Day returns on October 13 and 14. This year in the UK, Prime members who spend £10 with selected small businesses selling from now through to Monday October 12 will earn £10 to spend on Prime Day. 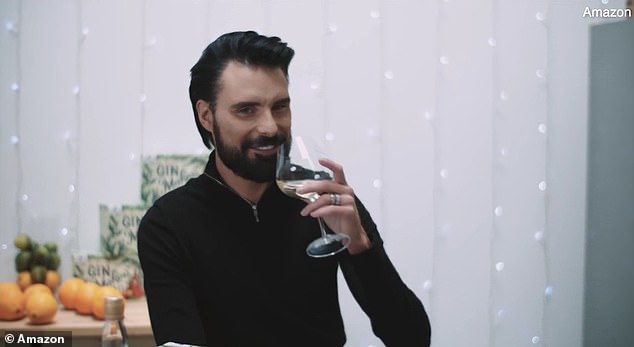 Tipsy: Rylan sampled gin at Sandy Leaf Farm which is available to purchase on Amazon as he teamed up with the e-commerce website to promote Prime Day on and October 13 and 14