A fox hunt supporter was filmed clashing with saboteurs after ramming his 4×4 into their vehicle and launching a foul-mouthed tirade.

Footage shows James Lea, 50, driving his Mitsubishi Shogun into a Range Rover after activists try to disrupt a hunt in Melchbourne, Bedfordshire.

Lea is then recorded on a saboteur’s mobile phone calling one female protester ‘a f***ing b****’ during the incident on September 30, 2017.

Video of the incident emerged after Lea admitted criminal damage at Luton Magistrates Court on April 4 this year. 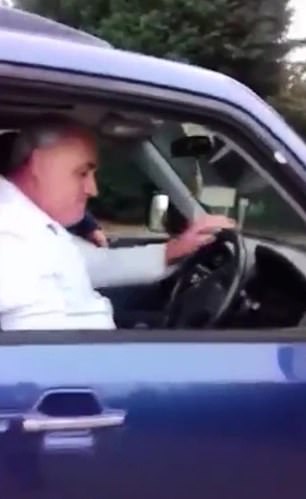 James Lea, 50, is recorded swearing at hunt saboteurs after driving his 4×4 into their vehicle

The confrontation happened as the South Cambridge Hunt Saboteurs confronted supports of the Oakley Fox Hunt.

The video shows Lea ramming the saboteurs with his car and then telling protestors; ‘Go on then, try it with a f***ing gypsy.’

Lea is also seen throwing parts of the smashed up Range Rover at the saboteurs.

The woman who filmed the video had been dropped off on a public footpath to search for the Oakley Hunt with their Range Rover parked on public property.

Lea then pulled up behind the Range Rover, forcing the car forward and screamed out of his driver side window: ‘F***ing w***ers.’ 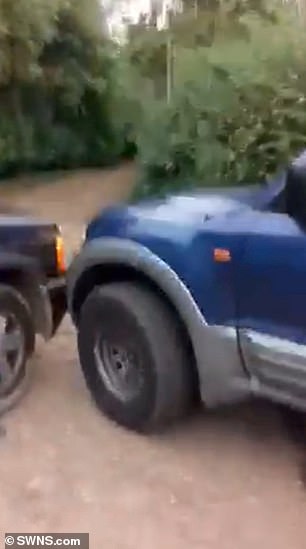 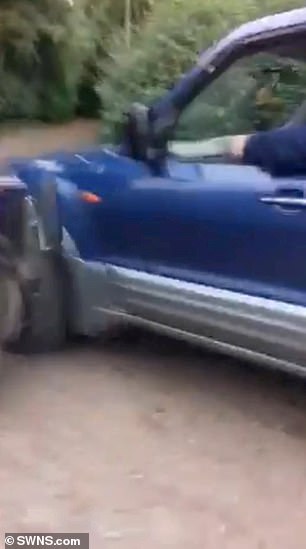 The video shows Lea ramming the saboteurs with his car and then telling protestors; ‘Go on then, try it with a f***ing gypsy’

Lea, who is believed to be a supporter, but not a member of the Oakley Hunt says to the only female protester: ‘F*** off.

During the ordeal the saboteur group tell one another not to interact with the furious Lea, and continue to walk away from him while filming.

Lea continued to threaten the group and threw broken car parts at them.

‘Do ya? Do you want to come over here on private property.

During the attack, a member of the South Cambridgeshire Hunt Saboteurs in the Range Rover called the police as the vehicle drove out of the private property and back onto the public road.

The hunt saboteurs get back into their car and leave.

Lea received a conditional discharge for six months, paid court costs of £105 and compensation to the hunt saboteurs of £562.79.