Sacha Baron Cohen’s portrayal of Israeli agent Eli Cohen as a womanising playboy in new Netflix blockbuster ‘The Spy’ has been slammed by his family.

But Cohen’s eldest daughter has blasted Netflix for sensationalising her father’s story and said she tried to have the series blocked.

Speaking to MailOnline from her home in Tel Aviv, Israel, Sofia Cohen said: ‘The portrayal wasn’t very deep or complex and it included many things that were from the director’s imagination.

‘It showed my father as a flamboyant, big-spending womaniser who took reckless risks because he had feelings of inferiority.

‘In truth, my father was very sure of himself and very strong and happy with his life, he was not so poor and miserable. He was the best Mossad had. The drama was not a compliment for my father or my family.’ 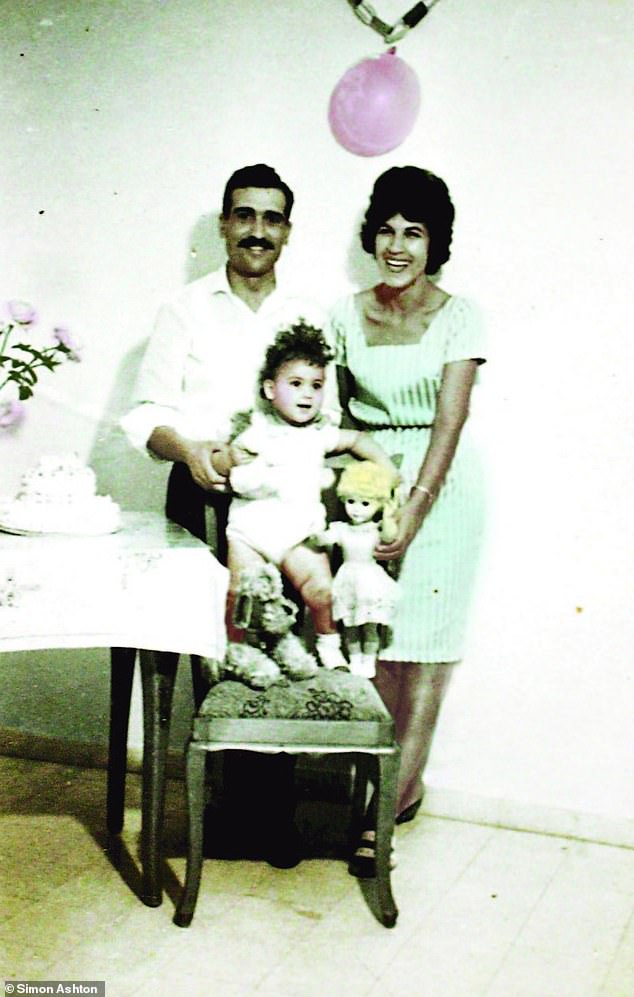 Cohen, with wife Nadia and his eldest daughter Sophia in 1961, was recruited from his dreary life as a clerk for an insurance firm and parachuted into Damascus to steal Syrian secrets 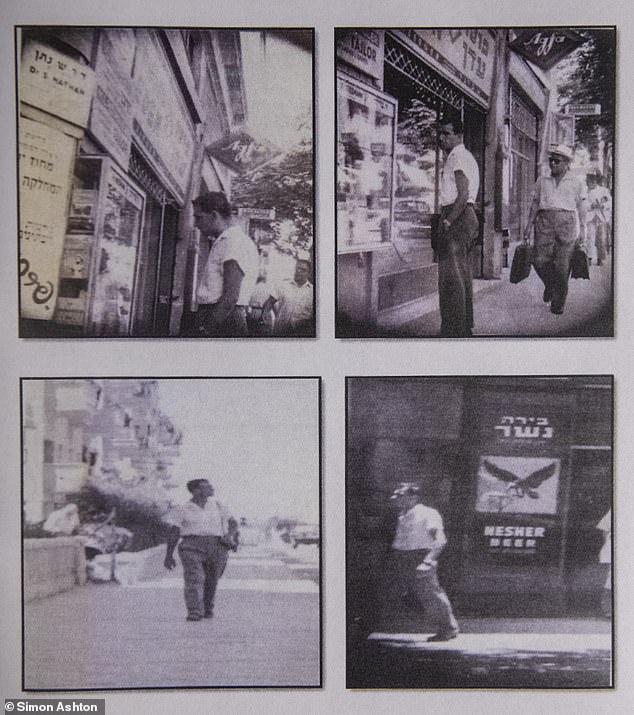 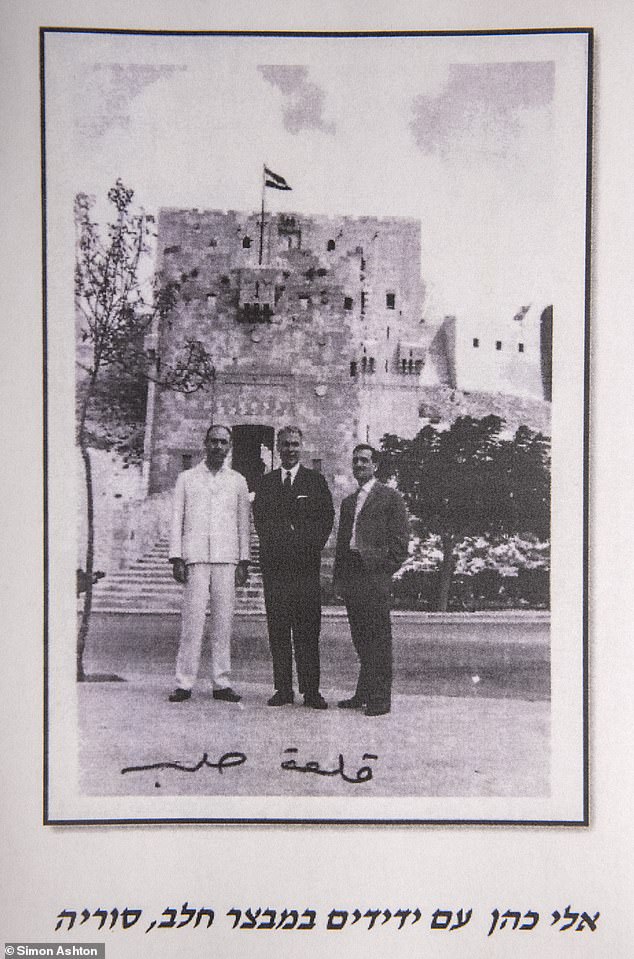 His life of espionage began in Buenos Aries in 1961 where his cover story was that he was a successful Syrian businessman keen to go to Damascus. Picture: Cohen undercover in Syria 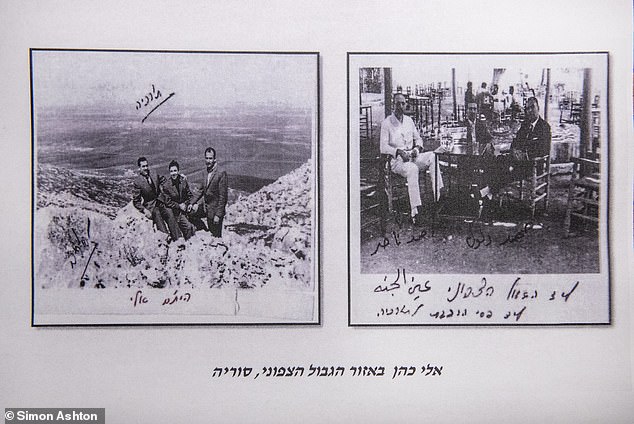 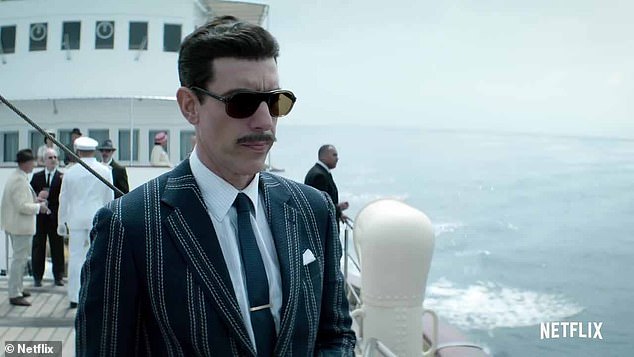 Cohen, played by Sacha Baron Cohen in the series, moved to Syria in 1961 and worked his way up the country’s elite, sending military secrets home in coded transmissions to his homeland

Sophia, 59, a psychologist, said she and her mother Nadia were particularly upset at the idea that her father was a ladies’ man who hosted debauched sex-parties for Syria’s top brass.

‘He wasn’t extravagant and he didn’t show off,’ she said. ‘He wasn’t a womaniser.

‘He was very modest and conservative in his way of living in every aspect of his life. As for the reports about his lovers, I don’t want to know about this part of him. It was his job.’ 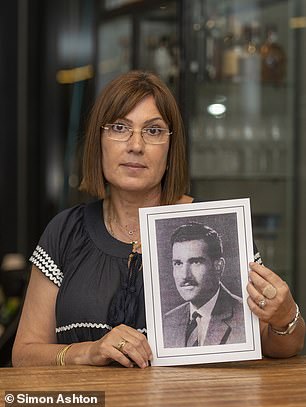 Cohen became Israel’s most celebrated spy after being recruited by the country’s intelligence agency, Mossad, while working in Tel Aviv as a clerk with an insurance company.

His cover story was that he was Kamel Amin Thaabet, an extremely successful Syrian businessman.

Telling his family he was employed as a furniture buyer for the Ministry of Defence, Cohen’s espionage career began when he moved to Buenos Aires and made the contacts necessary to set himself up in Damascus.

He moved to Syria in 1961 and worked his way up the country’s elite, sending military secrets home in coded transmissions to his homeland. His intelligence from behind enemy lines was instrumental in Israel’s defeat of Syria in the Six Day War.

During a top secret tour of the Golan Heights — one of the most important Syrian military sites on the border with Israel — Cohen offered to fund the planting of eucalyptus trees in key places to give troops shade and hide military fortifications from the Israelis. 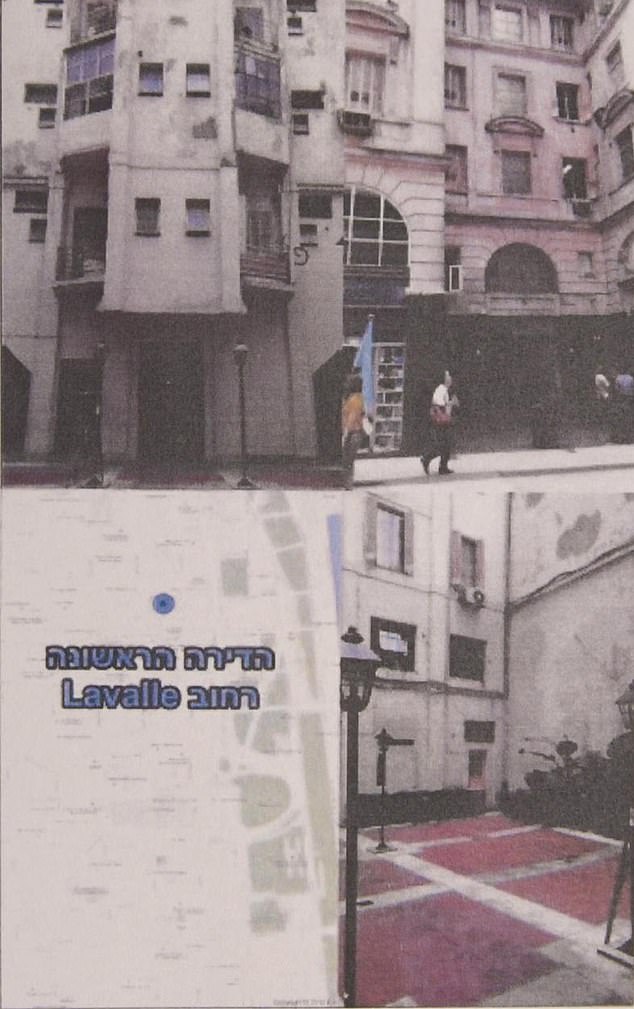 In 1961 Cohen left his family in Israel and set himself up in Buenos Aries to provide a cover story for his final destination in Syria. Newly-released Mossad files show pictures of the apartment where undercover agent lived at 375 Lavalle Street in the Argentine capital 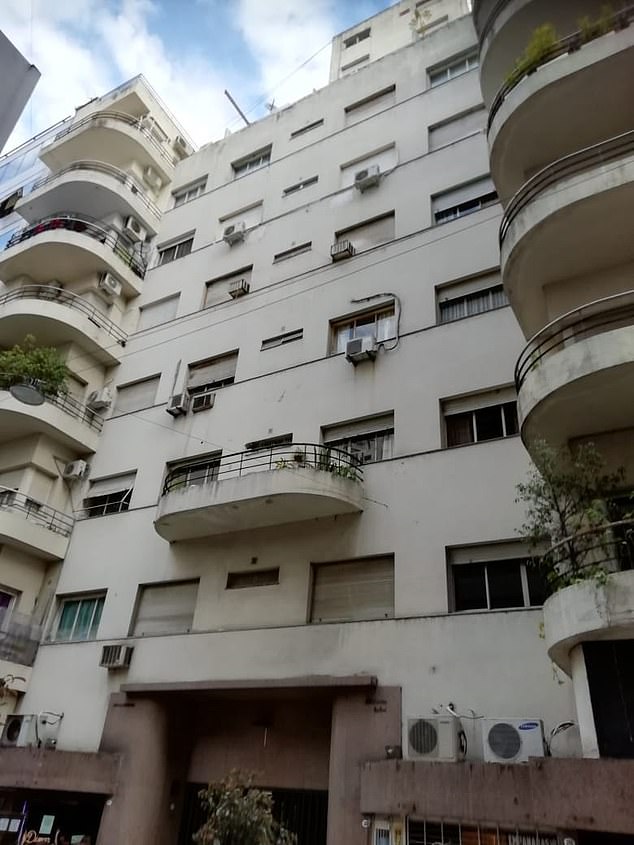 The block of flats in at 375 Lavalle Street, Buenos Aries, looks remarkably similar today to how it looked when Cohen was living there for a short period at the beginning of the Sixties 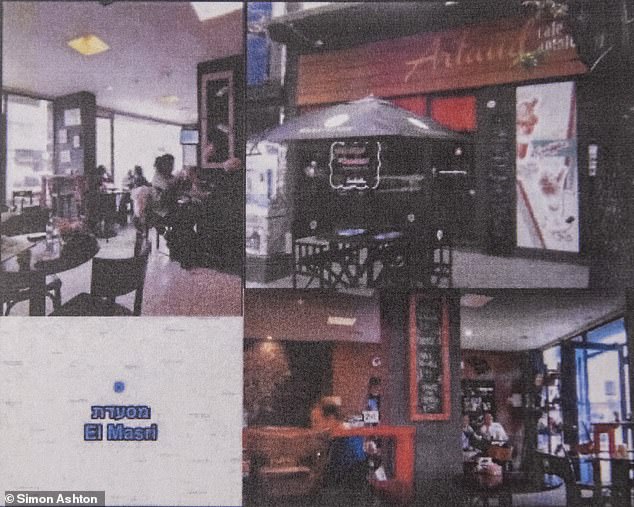 While building his cover story in Buenos Aries, Cohen would often meet Syrian officials at Cafe Artaud as he posed as a wealthy exporter of furniture. Pictured: Mossad files show how the cafe looked while the secret agent operated there

The Syrians thought it was a great idea and readily agreed. But after Cohen shared intelligence with his bosses, the trees ended up being used years later by the Israelis to target underground Syrian bases.

Cohen became so trusted in Syria that at one point he was even offered a senior role in the country’s Defence Ministry.

But his incredible haul of military secrets came to an abrupt end in 1965, when Syrian counter-intelligence decided to smoke out any spies in their country.

They called in spooks from Russia’s feared KGB security services, who brought specialist radio equipment to the Middle East which was able to pinpoint secret broadcasts being made inside Damascus. 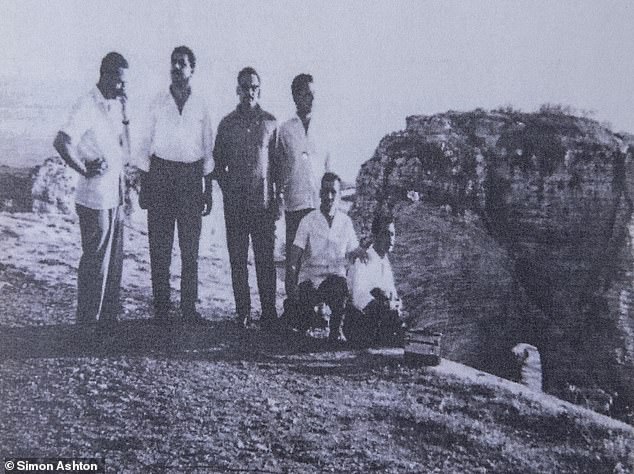 Cohen’s cache of intelligence from behind enemy lines in Damascus where he worked his way up in the Syria’s social elite was instrumental in Israel’s defeat of Syria in the Six Day War. Pictured: Cohen (second from the right) is seen working undercover in Beirut

Cohen was selected by Mossad for his mission because he spoke Arabic and his appearance could pass for Syrian. Pictured: A postcard written in French sent from Istanbul signed off with his code name Menashe 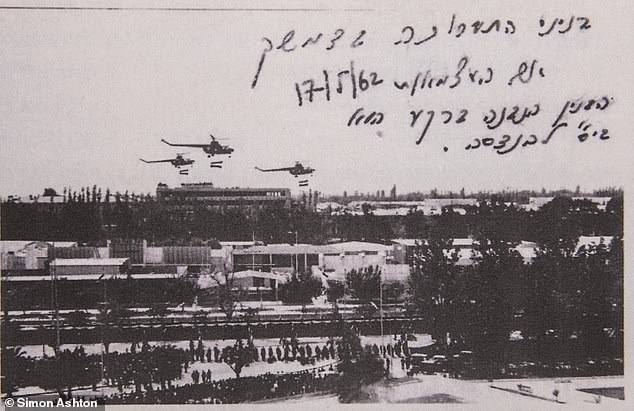 The signal was coming from Cohen’s home. When armed men kicked in his door to arrest him, they astonishingly found the deeply trusted Cohen in the middle of making a secret code transmission.

Cohen had his fingernails ripped out and was hanged in Damascas Square. His body was covered with anti-Zionist slogans and left hanging for six hours.

His body has never been returned home despite pleas from his family to bury him in Tel Aviv.

Sophia gave MailOnline newly-released photos from Mossad files that show him during surveillance training in Tel Aviv in 1961.

She also showed photos of a cafe in Buenos Aries where he met Syrian diplomats and where he lived in the Argentina capital.

Sophia said she was surprised that Sacha Baron Cohen made no attempt to contact the family prior to filming.

‘I think Sacha could have learned more if he had met me,’ she said. ‘But perhaps then it would have been another series. More accurate and maybe more deep.’

She said the star bore a startling resemblance to her father despite being 6ft 2in when the super spy was a diminutive 5ft 6in.

She added: ‘Netflix used my father’s life. But many people use him. He is a symbol in Israel and everybody I know uses him for their own reasons.

‘There is a public image of Eli Cohen and I try to find my own father, the real person, because everyone colours it with their own agenda.’

The real man she fondly remembers, she said, was very different from the Netflix character.

‘He had a sense of humour,’ she said. ‘He was playful. He was a very, very responsible man. He was not brave like it shows in the series.

‘He had very good artistic taste. He liked to dress well and look very nice. He was very loyal both to the Mossad and to his Arab friends, not disclosing their names even under torture. 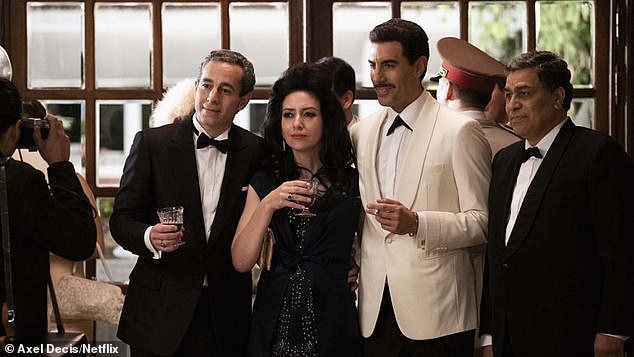 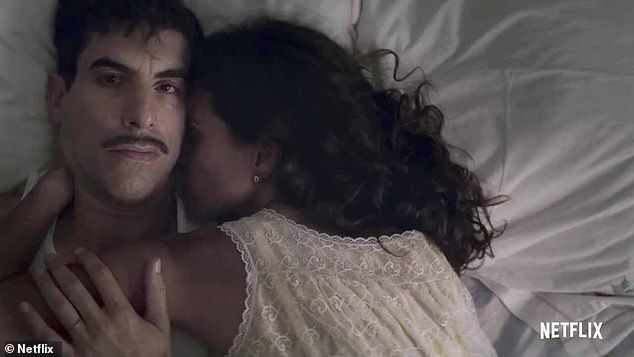 Cohen told his wife Nadia that he had got a job as a furniture buyer with the Syrian Ministry of Defence to explain why he would be spending so much time away from her, travelling overseas 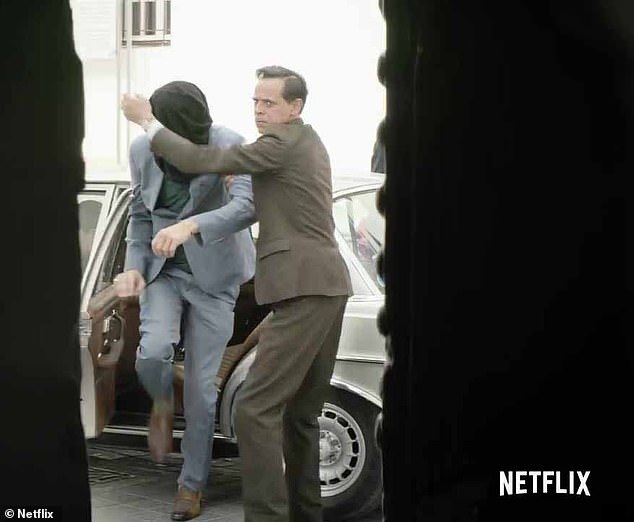 Cohen’s daughter Sophia said that the family were unhappy with his portrayal as a flamboyant womaniser and accused Netflix of sensationalising her father’s story. Pictured: Sacha baron Cohen is arrested in the series when he is unmasked as a Mossad spy working in Syria

‘He was very lovable. They loved him. He was quiet. He was a very solitary man in his personality. The outgoing man was an act. He liked people but he preferred to be alone. 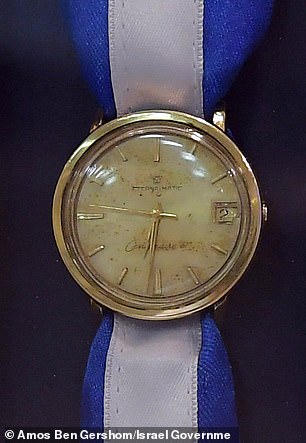 Cohen’s watch was recently returned to his family, who continue to lobby Syria to have his body repatriated to his homeland

‘The complexity of his character I didn’t see in the series. He was shown as taking risks and having gymnastic abilities that he didn’t have at all.’

Ms Cohen, the oldest of her father’s three children who was four when he was executed, said he would spoil her with dolls, dresses and stuffed animals whenever he returned home.

She says she doesn’t recognise the way her father was portrayed in the drama, scaling walls to steal documents and putting his cover at risk.

‘Netflix wanted to show my father like James Bond. But he didn’t spend a lot of money. We think that maybe they caught him because he didn’t live like a rich man in Syria. It was strange that his house was very modest.’

Mr Cohen’s wife, Nadia, now 84, was upset because she is portrayed as a poorly-paid maid in the series when in real-life she had trained to be a nurse.

Sophie said: ‘We weren’t a rich family but we were not poor like they showed us. To be honest, my mother felt insulted.’ 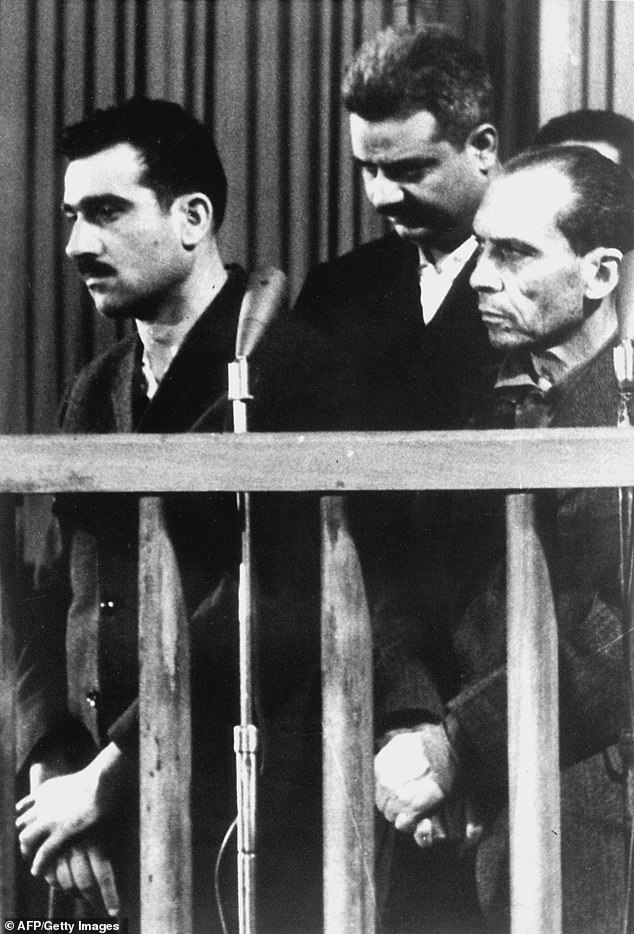 Cohen’s incredible haul of military secrets came to an abrupt end in 1965, when he was caught red-handed sending transmissions to Israel from his apartment. Pictured: Cohen with two un-named defendants at his espionage trial in Damascus ten days before he was put to death 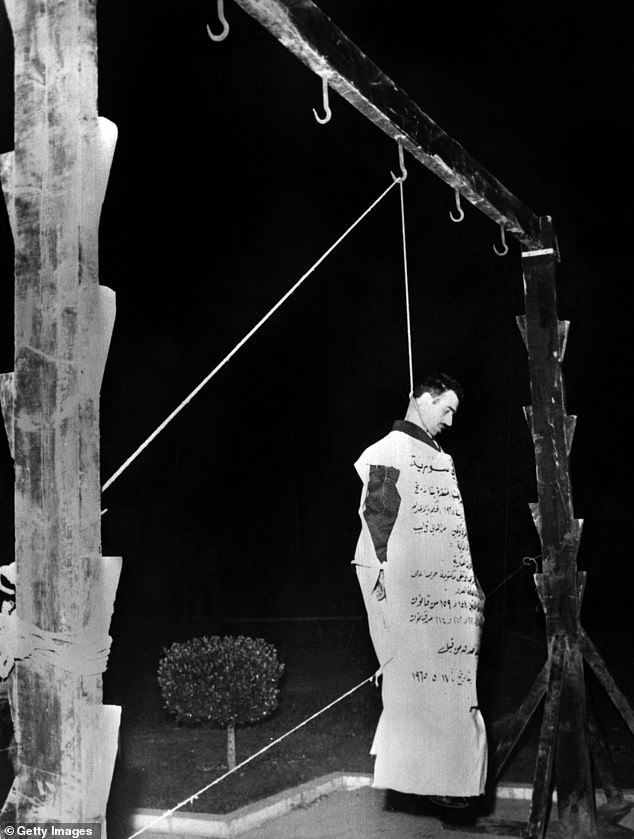 Cohen had his fingernails ripped out and was hanged in Damascas Square. His body was covered with anti-Zionist slogans and left hanging for six hours (pictured)

Before the drama was filmed, Netflix producers showed the family a draft of the script.

‘We didn’t want them to produce it at all,’ she said. ‘But our lawyers said that against Netflix we didn’t have a chance.

‘So we spoke to the director and negotiated with him to change little things, knowing that he would keep the plot as he liked it to be.

‘The whole thing hurt us and we would have preferred it was never made,’ she added. 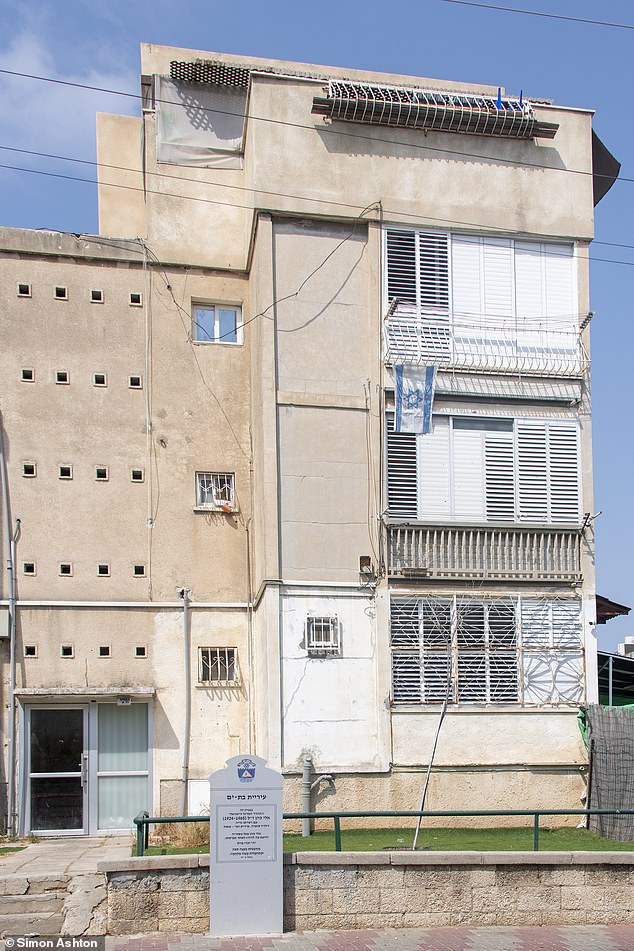