Sadiq Khan today called for Amber Rudd to resign over the Windrush scandal as he tore into the Government’s ‘inhumane’ treatment of immigrants.

The Labour London Mayor accused the Home Secretary of being ‘completely unaware’ of what is going on in her own department.

And he said that rather than ‘hiding behind civil servant’ the time has come for her to quit.

And he accused Theresa May of ‘fueling division and mistrust’ by introducing the ‘hostile environment’ policy for illegal immigrants.

His outspoken intervention piles further pressure on Ms Rudd, who is battling to cling on to her job.

She has faced a growing clamour to resign after it was revealed the home Office uses deportation targets – contradicting evidence she gave to MPs last week.

Ms Rudd said she had not idea the targets existed when she was hauled back to the commons to explain herself – but a day later it emerged a memo sent to her last June detailed them.

Labour has called for a full inquiry into the deportation targets and an investigation into whether Ms Rudd flouted the ministerial code in her evidence to MPs.

While 200 MPs have written to the Government to demand that the assurances given to Windrush immigrants that they can stay in the UK and will be compensated are enshrined in law.

In a strongly-worded intervention in The Guardian today, Mr Khan said it is time for Ms Rudd to go.

He wrote: ‘What the Home Secretary and Prime Minister don’t appear to understand is that the Windrush scandal is the direct consequence of their policies and not just another example of the administrative chaos at the Home Office.

‘It is about a generation who have lived here all their lives suddenly feeling they are not wanted here.

‘Rather than hiding behind process or blaming civil servants yet again, the time has now surely come for the home secretary to resign.’

He said that Mrs May introduced legal changes which turned the immigration system into an ‘inhumane’ process where people who lived in the UK for years were treated with hostility and suspicion.

And he said Ms Rudd appears to have no grip on her own department.

‘May is also responsible for vans saying ‘go home’ that were driven around the most ethnically diverse parts of our country.

‘The ‘hostile environment’ of which she is the architect has played a role in fuelling division and mistrust.

‘This weekend’s revelations have exposed Amber Rudd even further as someone who appears completely unaware about what is going on in her own department.

Shadow home secretary Diane Abbott has written to the PM calling for an investigation into whether Ms Rudd. 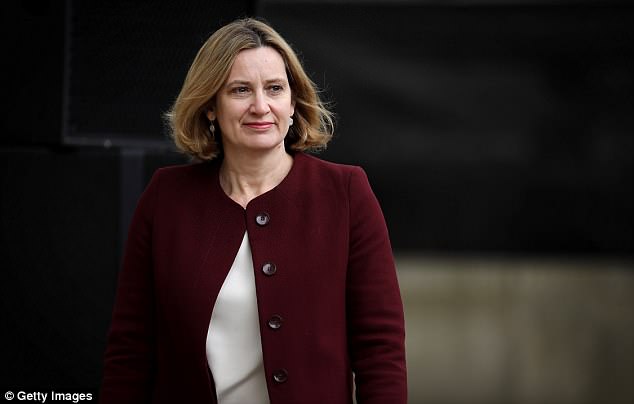 In the letter, copied to the Cabinet Secretary and the Director General of the Propriety and Ethics Team, she highlights the apparent contradiction between the Home Secretary’s claims she was not aware of any enforced removal targets at the Home Office and a leaked memo that was sent to her in June 2017.

Ms Abbott said: ‘The Windrush scandal has exposed something rotten at the heart of Theresa May’s Government and serious questions remain over what the Home Secretary was told about targets for removals.

‘The Prime Minister must launch a full inquiry to get to the bottom of who knew what and when, including whether Amber Rudd breached the ministerial code.

‘The Home Secretary has clearly lost control of her department and lost the trust of the public and must either resign or be removed by the Prime Minister.

‘A change of Home Secretary demands a change in this Government’s pernicious immigration policy, or it will be meaningless.’