The biggest and brightest stars of Hollywood descended upon the Shrine Auditorium in Los Angeles for the SAG Awards, on Sunday.

And Catherine Zeta-Jones dazzled the red carpet as she led the British glamour alongside Gwendoline Christie and Helena Bonham Carter.

The Welsh actress, 50, looked sensational in a plunging silver gown which was ruched at the waist with an intricate jewel design to accentuate her slender frame.

Catherine was sure to set pulses racing as her ensemble was backless and showed off a glimpse of her cleavage, while it also had a daring thigh split.

She boosted her height in a pair of chic silver heels, while she kept her accessories simple by wearing a pair of dangling jewel earrings so that all attention remained on her dress.

Her raven locks were pulled back into a glamorous half-back-do, while she accentuated her natural beauty by wearing light touches of make-up for the occasion.

Catherine was joined by her husband of 19 years Michael Douglas, who looked dapper in a black suit which he wore with a white shirt, a black bow tie, and a white pocket square. 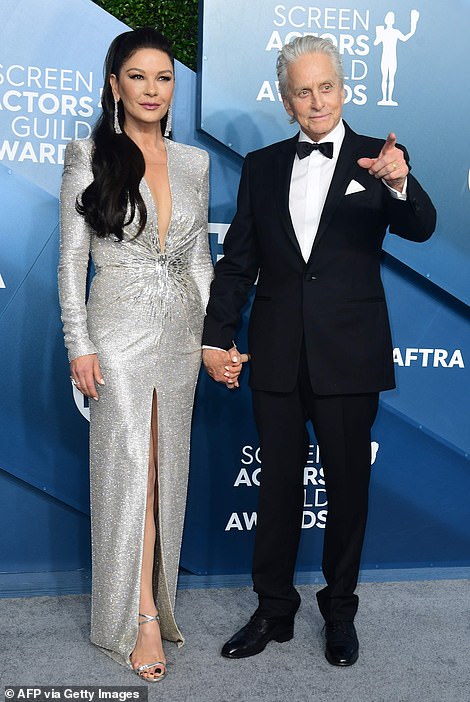 Supportive: Catherine was joined by her husband of 19 years Michael Douglas, who looked dapper in a black suit which he wore with a white shirt, a black bow tie, and a white pocket square 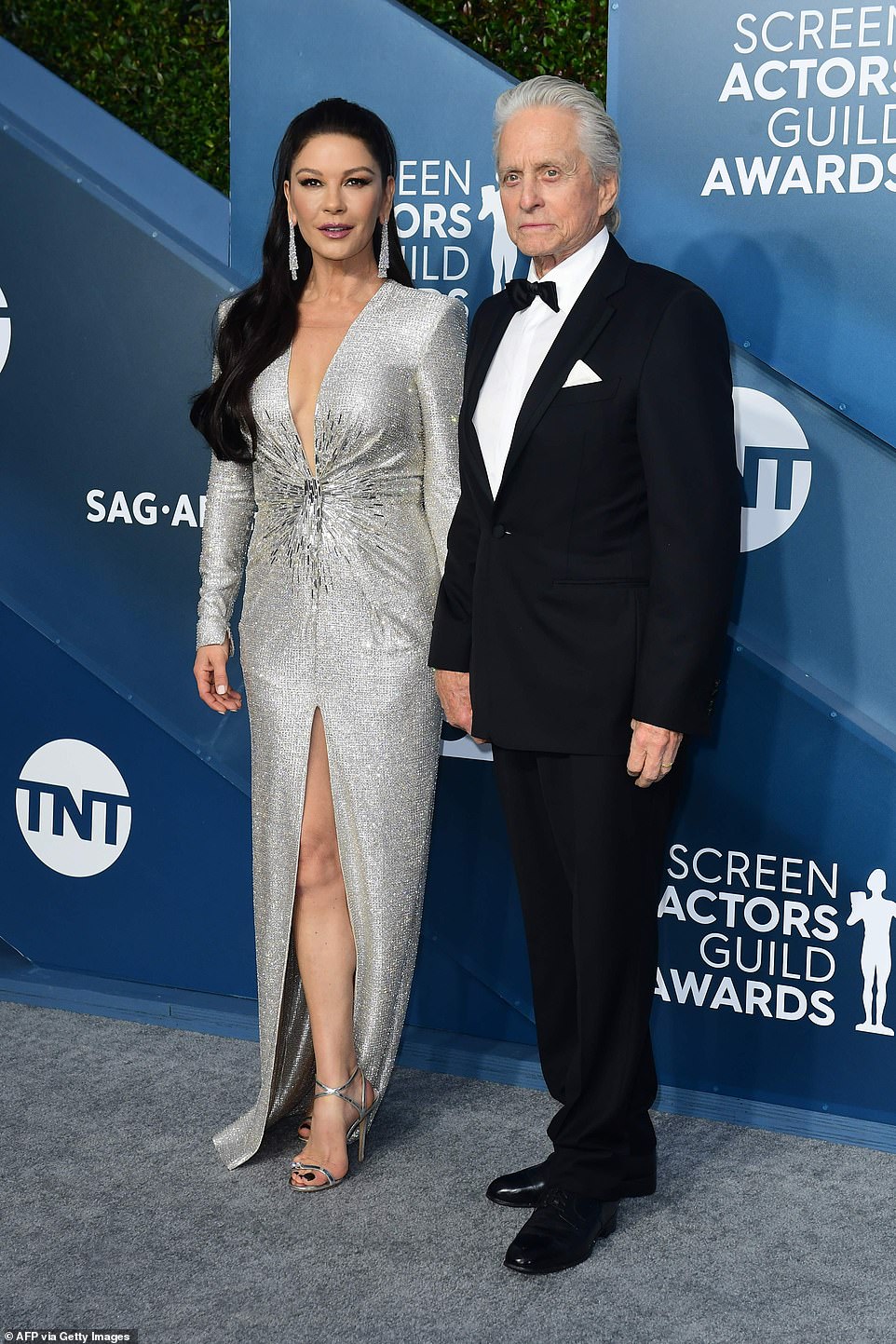 The Screen Actors’ Guild Awards have long been been a bellwether for Oscar success, since actors make up the largest percentage of the Academy.

So all eyes were on the 26th annual SAG ceremony, which took place at the Shrine Auditorium in Los Angeles Sunday night.

In film, Once Upon A Time In Hollywood and The Irishman earned top honours, securing two individual actor nominations and the coveted Best Ensemble honour. Both were also nominated in the stunt ensemble category.

While Tarantino and Scorsese’s films both seemed like shoe-ins, there were also many surprises.

Like Once Upon A Time In Hollywood and The Irishman, Bombshell also dominated the individual acting categories, earning nominations for lead Charlize Theron and supporting players Nicole Kidman Margot Robbie. Their ensemble nomination puts Bombshell in the same league as the critically-acclaimed Scorsese and Tarantino films.

Parasite, the much-praised Korean film, makes history as just the second foreign language film to be nominated for the SAGs’ top award.

It still came away with acting nominations for its leads, Adam Driver and Scarlett Johansson, and Laura Dern for best female actor in a supporting role.

Johansson earned double nominations for the evening, with a supporting nod for her performance in Jojo Rabbit as well.

The nominees for best performance by a female actor in a leading role were: Marriage Story’s Johansson, Bombshell’s Theron, Cynthia Erivo of Harriet, Lupita Nyong’o for Jordan Peele’s horror romp Us and Renee Zellweger for the biopic Judy.

Those picks omitted Saoirse Ronan of Little Women and Awkwafina of The Farewell, whose performance earned her a Golden Globe earlier this month.

Among those left out were Antonio Banderas for Pain and Glory, Irishman lead Robert De Niro, Eddie Murphy for Dolemite Is My Name and Adam Sandler Uncut Gems. (While De Niro wasn’t given an acting nomination, he will be bestowing with the Life Achievement Award at the show.)

Tom Hanks (A Beautiful Day in the Neighbourhood) and Jamie Foxx (Just Mercy) were nominated for best male actor in a supporting role.

And while she was snubbed by the Oscars, Jennifer Lopez could be adding to her trophy collection with a nomination for best female in a supporting role category.

It was also a tough competition in TV, with Apple TV+’s The Morning Show earning three individual nominations for supporting actors Steve Carell and Billy Crudup, and female lead Jennifer Aniston, but the show failed to make the ensemble category.

In Best Drama Series Ensemble, the actors nominated the casts of Big Little Lies, The Crown, Game of Thrones, The Handmaid’s Tale and Stranger Things.

Recently, a SAG ensemble nomination hasn’t been quite as vital for a Best Picture winner at the Oscars as in years past.

The last two winners, Green Book and The Shape of Water, managed the feat without a nod for the screen actors’ top award.

Before that, it had been two decades since the SAG Awards didn’t help predict the eventual best-picture winner.

Usually, about four out of five individual SAG nominees go on to land an Oscar nomination.

Outstanding Performance by a Male Actor in a Leading Role

Leonardo DiCaprio – Once Upon a Time in Hollywood

Outstanding Performance by a Female Actor in a Leading Role

Outstanding Performance by a Male Actor in a Supporting Role

Tom Hanks – A Beautiful Day in the Neighborhood

Brad Pitt – Once Upon a Time in Hollywood

Outstanding Performance by a Female Actor in a Supporting Role

Outstanding Performance by a Cast in a Motion Picture

Once Upon a Time in Hollywood – Sony

Outstanding Action Performance by a Stunt Ensemble in a Motion Picture

Once Upon a Time in Hollywood

Jharrel Jerome – When They See Us

Outstanding Performance by a Male Actor in a Drama Series

Sterling K. Brown – This Is Us

Outstanding Performance by a Female Actor in a Drama Series

Outstanding Performance by a Male Actor in a Comedy Series

Outstanding Performance by a Female Actor in a Comedy Series

Christina Applegate – Dead to Me

Outstanding Performance by an Ensemble in a Drama Series

Outstanding Performance by an Ensemble in a Comedy Series