A sailor killed in the attack on Pearl Harbor 78 years ago has finally been laid to rest next to his parents in Missouri after DNA testing identified his remains last year.

On Wednesday, a number of patriotic Americans lined the streets from Willow Springs all the way to Mountain View, the next town over, to see Navy Seaman 1st Class Orval Austin Tranbarger laid to rest.

Tranbarger received a hero’s sendoff to Chapel Hill Cemetery, where he was buried next to his parents, Major and Minerva Tranbarger, at 1pm in a touching ceremony.

Navy Seaman 1st Class Orval Austin Tranbarger (pictured) was laid to rest next to his family at Chapel Hill Cemetery in Mountain View, Missouri, on Wednesday 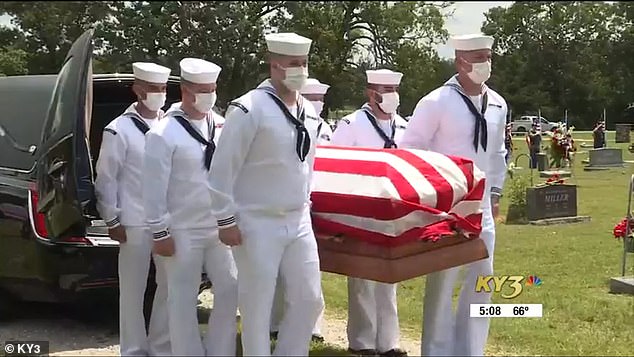 Tranbarger’s remains were left unidentified for 78 years and they were kept among several others at the National Cemetery of the Pacific. Pictured: Seaman carry Tranbarger’s casket on Wednesday

‘We said, why not bring him home,’ Burl Tranbarger, a younger brother of Tranbarger, told KY3.

The seaman was one of 11 children. He is survived by two brothers and two sisters.

Tranbarger, eager to serve his country, joined the Navy just one day after his 18 birthday.

On December 7, 1941, he would become one of 429 crewmen killed aboard USS Oklahoma during the attack on Pearl Harbor at age 20. Just over 2,400 people died in total. 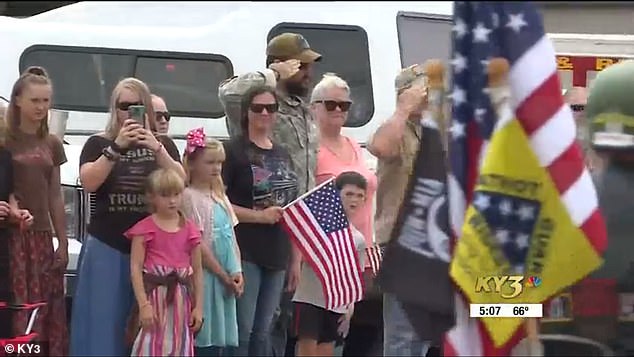 The surprise military strike from Japan took place at the Pearl Harbor naval base in Honolulu, Hawaii, and the USS Oklahoma was torpedoed several times until it capsized.

It was a catalyst in the United States’ formal entry into World War II after being neutral in the fight for two years.

Navy personnel would spend more than three years trying to recover the remains of their deceased servicemen, but by September 1947 only 35 had been positively identified. 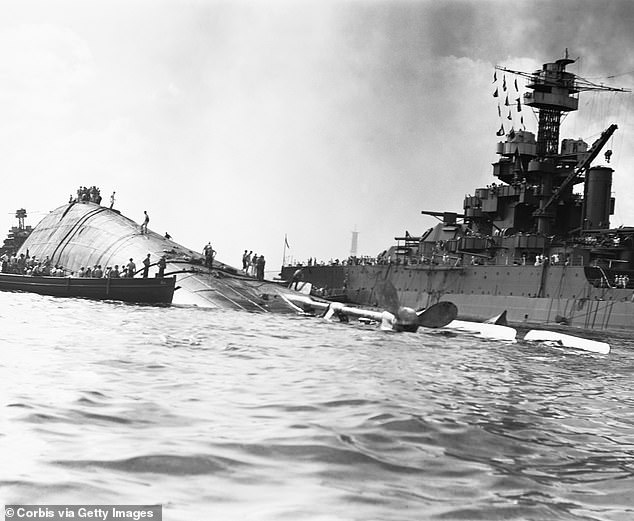 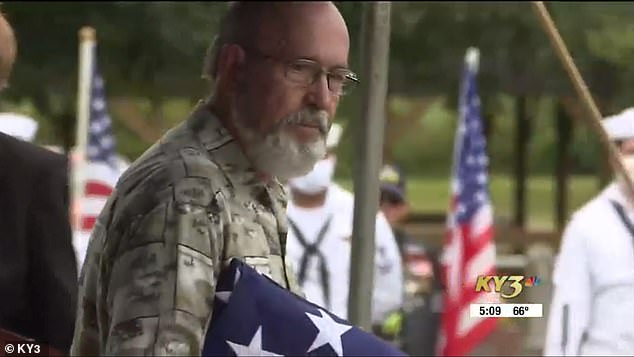 Burl Tranbarger (pictured), one of four surviving siblings, accepted a folded American flag during the ceremony

Tranbarger’s remains had been among several others to be kept at the National Cemetery of the Pacific.

In 2015, the remaining caskets linked to the USS Oklahoma were all exhumed and transferred to a laboratory where Tranbarger was identified on September 18, 2019.

But the arrival of the COVID-19 pandemic in January quickly halted any burial plans as Americans closed themselves inside and businesses shuttered. Missouri has recorded 56,272 coronavirus cases and 1,300 deaths.

The Tranbarger family held the burial just five miles away from where the serviceman grew up.

‘On the way here I thought, well Orval, you finally are welcomed home,’ Burl said.

Burl was just two-year-old when Tranbarger was killed. He accepted a folded American flag during the ceremony.

‘Today has got me convinced that people do honor the fallen military. They honor our nation,’ said Burl. 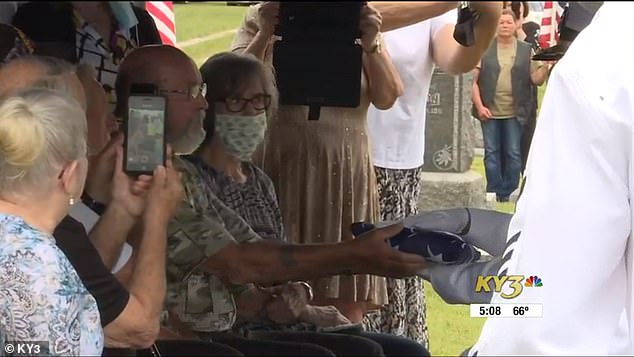 Burl (center): ‘Today has got me convinced that people do honor the fallen military. They honor our nation’ 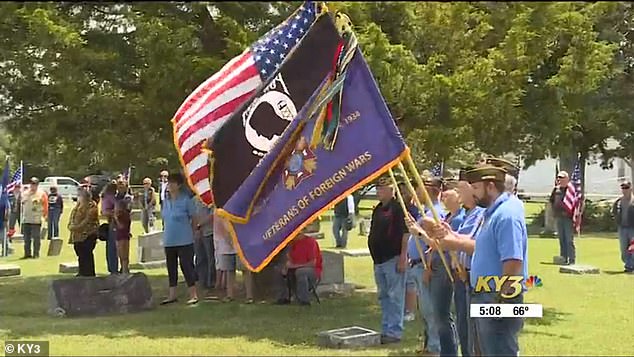 Although most did not know Tranbarger personally, many residents and veterans attended the burial service on Wednesday in Mountain View

In addition to extended family, several local residents in Mountain View took time out to honor Tranbarger and watch his funeral procession.

‘This is our hometown. This is where he was from and I think it’s just a wonderful thing,’ Sandy Pruett told KY3.

‘He’s somebody they obviously didn’t know, who was well before many of their times,’ said Wright.

‘It showed they love America and they love people that support America, the troops, him being one of them. Happy to see him get a welcome home.’

Michael Plum, a chaplain at the VFW Post No. 3009 in Mountain View, is a Marine veteran who wanted to honor Tranbarger. 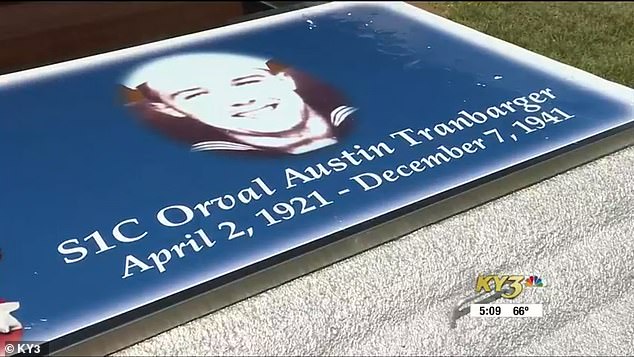 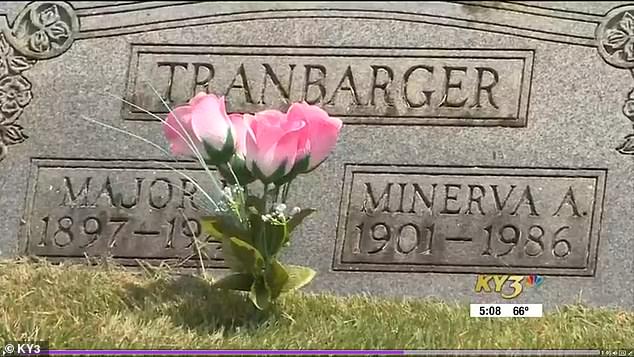 Michael Plum: ‘It showed they love America and they love people that support America, the troops, him being one of them. Happy to see him get a welcome home’

‘When you go into the service, as veterans we sign a blank check that we are willing to give our life for our fellow Americans, for our country,’ Plum told Springfield News-Leader.

‘When a soldier, sailor, marine or airman … gives their life for their country, it gives you a feeling of pride. You want to honor that person.

‘Orval has never received the kind of recognition he deserves going down on the USS Oklahoma with all the others.’

After getting involved in Tranbarger’s honoring, Plum found out their bond goes beyond being servicemen.

‘Come to find out, my grandfather is a cousin to Orval,’ said Plum.

Tranbarger’s name is recorded on the Courts of the Missing at the Punchbowl, where the names of other missing World War II soldiers remain today.

A rosette was placed next to his name to show he has now been identified.