New details have emerged of the doomed voyage of Royal Navy officer, Sir John Franklin, in 1845.

When both ships became stuck in ice, Sir Franklin and all 129 crew members tragically died – but exactly how they met their end has long been a mystery.

The expedition, consisting of two ships led by British Royal Navy captain Sir John Franklin, aimed to find a sea route linking the Atlantic and Pacific oceans. But the crew was condemned to an icy death after their two ships got jammed in thick sea ice in the Canadian Arctic in 1846

The latest research into the mysterious deaths raised serious doubt about the popular belief that lead poisoning played a role in the death of members of the famed Franklin Expedition.

Previous analyses of bone, hair, and soft tissue samples from the remains of crew members found that tissues contained elevated lead levels, suggesting that lead poisoning may have been a major contribution to their demise.

However, questions remained regarding the timing and degree of exposure to lead and, ultimately, the extent to which the crew members may have been impacted.

For the latest study, Synchrotron-based high resolution confocal X-ray fluorescence imaging in partnership with scientists at the Canadian Light Source synchrotron at the University of Saskatchewan and the Advanced Photon Source was used to visualize lead distribution within bone and dental structures at the micro scale.

Researchers said the skeletal microstructural results ‘do not support the conclusion that lead played a pivotal role in the loss of Franklin and his crew’.

Researchers have now taken DNA from the skeletal remains of several sailors to identify who the lost souls were.

To their surprise, they discovered that four of the crew were women – a finding that goes against previous reports suggesting an all-male trip. 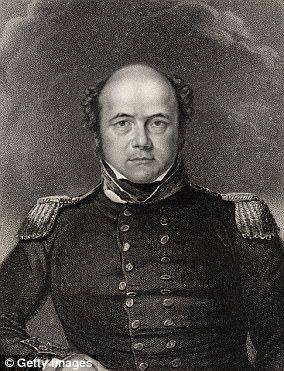 But the crew was condemned to an icy death after their two ships got jammed in thick sea ice in the Canadian Arctic in 1846.

The crew’s final message before they were wiped out – sent April 25, 1848 – indicated that the survivors were abandoning their ships.

They left the two vessels, the HMS Erebus and HMS Terror, north of King William Island and set out on a harsh journey south toward a mainland trading post.

Judging by the bodies found so far, none of the remaining crew made it even a fifth of the way to safety. 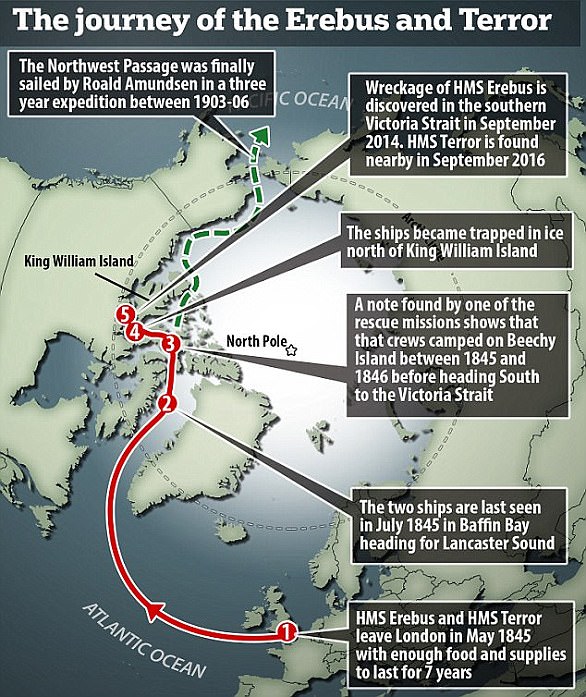 A previous study found that tuberculosis, which resulted in adrenal insufficiency (Addison’s disease), led to the deaths of some of the crew.

He said that for decades, historians and researchers have speculated on several generally accepted causes of death: exposure, scurvy, lead poisoning, botulism, tuberculosis and starvation.

During the Franklin expedition, the ships became trapped in ice pack in 1846 near King William Island, which is above the Arctic Circle in what is now northern Canada. 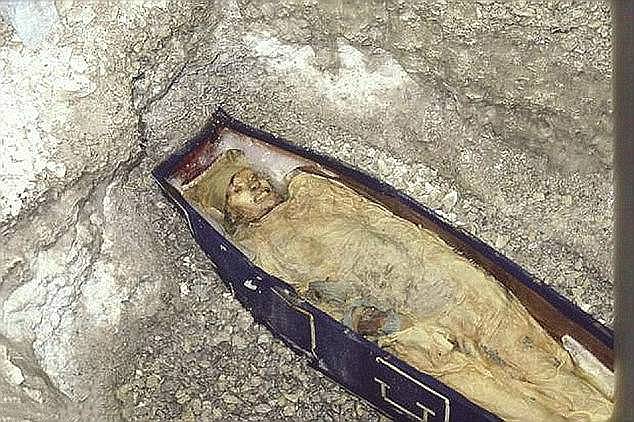 Scientists have taken the DNA from the skeletal remains of several sailors who died after getting stuck in Arctic ice on a doomed 1845 expedition. This image shows the mummified remains of one of the expedition’s doomed crew members 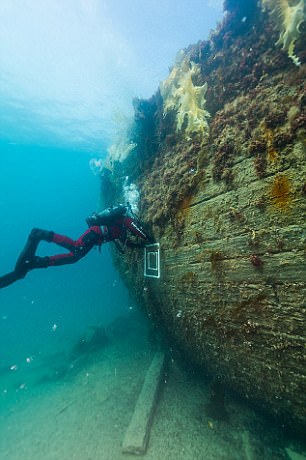 The ship was well-stocked with canned food, and the crew spent two years on and around the remote island waiting in hard conditions for the ice to melt and free their ships.

Some of the clues left behind included Inuit accounts of emaciated crew members with ‘hard, dry and black’ mouths.

With this account in mind, Dr Taichman, also a cancer researcher, decided to look more closely at the various cause-of-death theories and how each condition impacts the mouth.

Dr Taichman was surprised when Addison’s disease, which wasn’t one of the generally accepted causes of death, kept coming up during the analysis.

‘In the old days, the most common reason for Addison’s in this country was TB,’ Dr Taichman said.

‘In this country now, it’s immune suppression that leads to Addison’s.’ 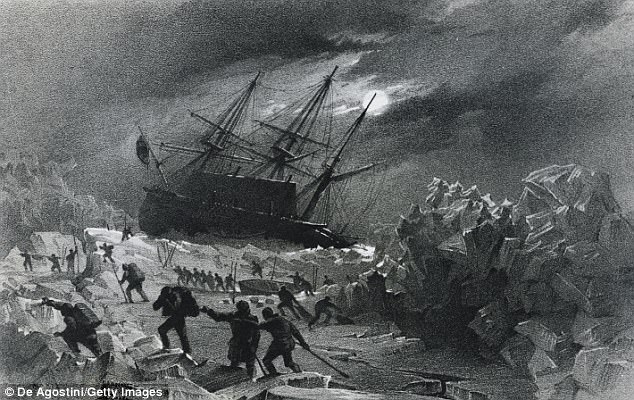 Stranded: In 1837 the HMS Terror became trapped by ice (pictured) while under the command of Admiral George Back. The ship remained stuck for 10 months. Eight years later it returned to the Canadian Arctic and this time it failed to escape the icy clutches of the Northwest Passage 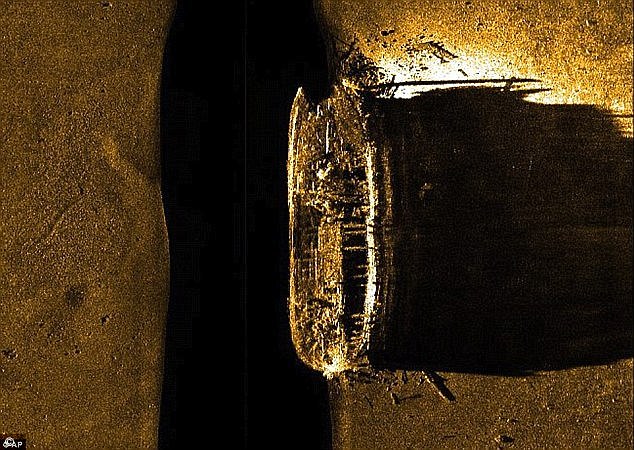 The sailors died during the disastrous Franklin Expedition in which two vessels vanished along with all 129 people on board. This image released by Parks Canada in September 2014 shows a side-scan sonar image of HMS Erebus shipwreck on the sea floor in northern Canada

People with Addison’s disease have trouble regulating sodium and can become dehydrated, and they can’t maintain their weight even when food is available – two conditions of the crew as observed by the Inuit.

Addison’s disease also leads to darkening of the skin, which could explain the Inuit accounts of the dark mouths.

While the idea of scurvy among the crew falls in line with the fact that sailors of that time had the disease, that alone does not explain the deaths.

A stronger clue than this was evidence  of tuberculosis that was discovered during autopsies of three sailors who died and were buried on a nearby island before the ships were marooned. 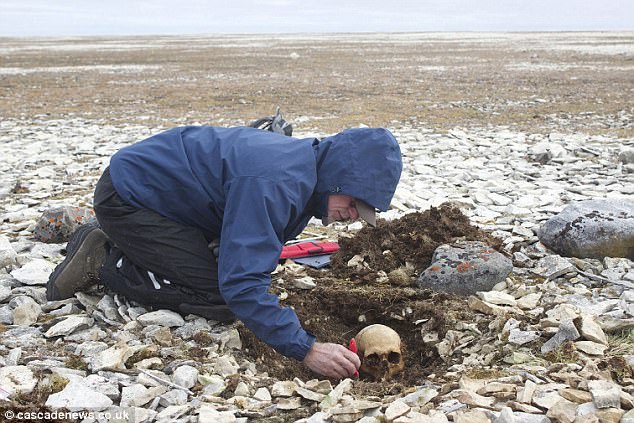 Since the 1980s skulls and other remains of more than 20 sailors have been found by scientists after decades of fruitless searching in the Canadian Arctic. This skull, believed to belong to one of the crew members, was found back in 1993

Lead poisoning, which was confirmed to a degree by an analysis of recovered bones, could have come from lead solder used fork the food cans and from lead pipes that distilled water for the crew.

‘Scurvy and lead exposure may have contributed to the pathogenesis of Addison’s disease, but the hypothesis is not wholly dependent on these conditions,’ Dr Taichman said.

‘The tuberculosis-Addison’s hypothesis results in a deeper understanding of one of the greatest mysteries of Arctic exploration.’

Dr Taichman’s fascination with the Arctic began as a child in his native Toronto, when his father told him stories about the early explorers.

Dr Taichman has visited the Arctic 16 times, where he’s led hiking trips and kayaked among the icebergs and proposed to his wife.