Salih Khater, 30, drove at police officers guarding the side entrance of the Palace of Westminster in a deliberate bid ‘to cause maximum death and injury’. He is seen in a Facebook photo

A student who deliberately rammed his car into cyclists outside Parliament after emailing Jeremy Corbyn to complain about the ‘intelligence service’ was today found guilty of two attempted murders.

Salih Khater, 30, ploughed his Ford Fiesta into a pedestrian and a group of cyclists who had stopped at a red light in Parliament Square on August 14 last year.

He then careered into a security lane and crashed into barriers as two police officers jumped out of the way.

The attack was caught on CCTV footage which was played in court.

Khater had a grudge against the government, which he thought was interfering in his life.

Prosecutors said his choice of target suggested it was a terrorist attack although there was no evidence that he had become a radicalised Muslim.

However police never recovered the material he was viewing on computers at the Bunna internet cafe in Sparkhill, Birmingham and say that his exact motive remains a mystery.

Khater had become a British citizen four weeks before the attack and appears to have been frustrated that his application for a British passport, so that he could return to Sudan to visit his sick mother, had been delayed.

Khater selected an ‘iconic site’ of ‘national importance’ and ‘intended to kill vulnerable members of the public on their way to work and police officers manning a barrier, in each case using his car as a lethal weapon’, Alison Morgan QC, prosecuting, said.

It was obvious that he intended to ’cause maximum death and injury’ in order to make ‘some form of statement’ but ‘precisely why he wanted to kill people who he did not know, is not clear’ she said.

‘We don’t know very much about Salih Khater, but we do know he was an angry and paranoid man,’ she added. ‘He had convinced himself that the authorities in the form of the intelligence service were constantly stalking him and interfering in his life.’ 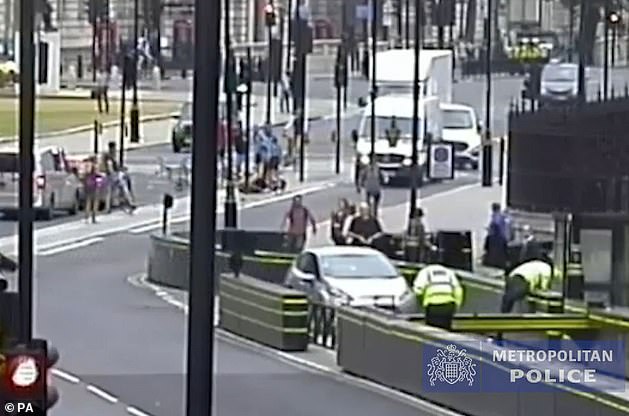 Khater drove at cyclists before approaching the Palace of Westminster barriers, where two policemen were standing 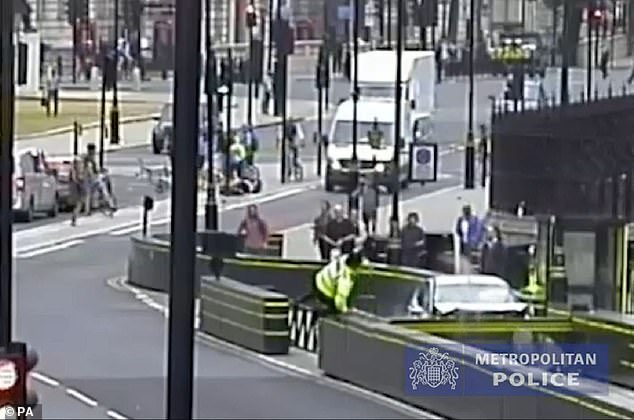 The officers try to dive out of the way as the vehicle comes hurtling towards them, in what appeared to be another terror attack

The Sudanese refugee claimed he had been startled by something and accidentally ran down the cyclists, then tried to ‘find somewhere to park the car’, adding: ‘I didn’t even realise this was the Houses of Parliament until after the event.’

He claimed that he was on his way to Tottenham Court Road to find somewhere to eat and added: ‘I do not have an interest in the Houses of Parliament.’

‘I was lost in this area. It was not my intention to do harm to anyone. I am not familiar with the area as a result the incident took place.’

Khater was born in Darfur, Sudan and told immigration officials he had left the country in 2008, travelling to Libya and then to Greece, France and on to Britain where he arrived in July 2010.

He claimed he had been involved with the Justice and Equality Movement (JEM) in Sudan and had been detained and tortured by the Sudanese authorities.

He was granted leave to remain on July 26, 2010, and worked as a security guard for Portcullis Security Solutions from late 2016 beginning an accountancy degree at Coventry University the following year.

He lived in a room above the Bunna internet cafe on Stratford Road in Sparkhill, Birmingham, until May 2018, when he moved into a council flat with his brother, Hashim.

In the few months before the attack his life was said to have become ‘less stable’ and he was thrown off his university course after failing his end of year exams.

‘Dear leader’: Khater’s bizarre email to Jeremy Corbyn complaining he was being ‘followed by spies’

In the email to Jeremy Corbyn, dated May 24, 2018, Khater wrote: ‘Dear leader, recently I have been subject to many event which made really confused and very worried about who to talk too.

‘As I have start to break my silence, I want to start by saying now, I think they are the intelligence service, and I will be going to the police station to make an official complaint on Monday. Kind of regards, Salih Khater.’

The reply, from ‘Ben’ in Membership services at the Labour Party, said: ‘Thank you for your recent email to Jeremy Corbyn MP, the Leader of the Opposition. We appreciate you taking the time to contact us about this matter and we are sorry to hear about your personal issue.

‘Please be assured that the comments of your correspondence have been noted and passed to the relevant members of Jeremy’s team. Thank you so much for sharing your experience.’

On May 24, he wrote to Jeremy Corbyn complaining about an ‘event’ involving the intelligence service and said he was also going to complain to the police.

Ishaq Kaibur, who worked in an internet cafe where Khater hung out, said that he had ‘seemed to get more aggressive’, adding: ‘Where previously you could have a joke with him, he did not engage and was angry towards us.’

He was said to have been seen on his own and laughing out loud to himself in the cafe.

On August 13, the day before the attack, he drove to Peterborough to apply for a passport through the fast-track scheme but was told he was ineligible to use the scheme because it was his first application.

Three years earlier, his father had passed away and his mother had also become ill and he wanted to go home, he said.

The counter examiner who served him described him as ‘calm, relaxed and not rude’, the court heard.

Back at the Bunna Cafe, he sat at a computer but the machine did not retain any record of his activity, the court heard.

However, his Samsung mobile phone, seized after his arrest, revealed he had searched for the location of the UK Border Agency office in Westminster and for 10 Downing Street.

At 10.40pm, he set off for London driving into Parliament Square shortly before 1am, crossing Westminster Bridge and then doing a U-turn to return over the bridge and along Whitehall, past Downing Street.

He drove on to Windmill Street, off Tottenham Court Road in the West End where he pulled up and appears to have gone to sleep until 5.52am when he pulled away and drove from Euston Road into Trafalgar Square and back along Whitehall.

CCTV captured Khater arriving in Parliament Square just before 1am and driving around Westminster, checking the layout for the attack five or six hours later.

He then parked up and rested for four-and-a-half hours in Windmill Street in Soho before returning to Parliament Square for further reconnaissance.

He went on to do four laps of the square before launching the rush-hour attack. 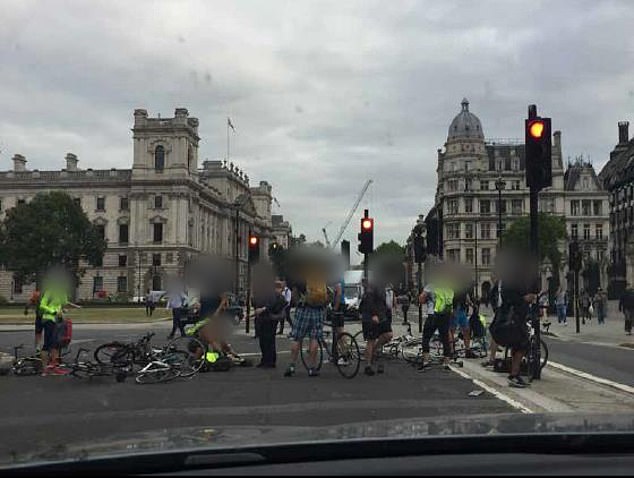 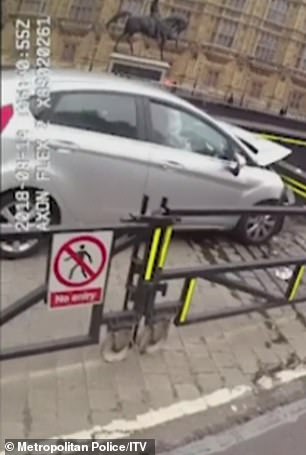 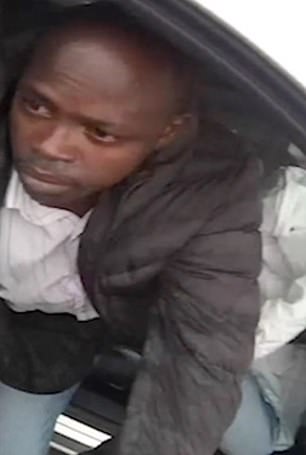 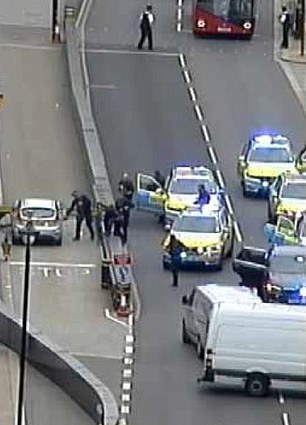 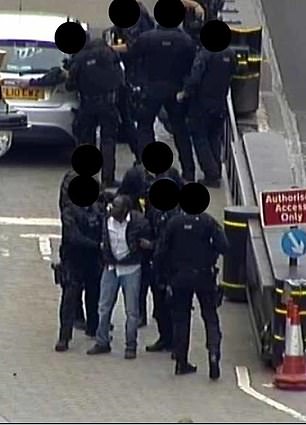 Pedestrian Paul Brown was crossing the road when Khater’s car ‘came out of nowhere’ and hit him, causing bruising and grazes.

Krystof Tokarski and Anya Breen were cycling to work and were waiting at traffic lights when Khater revved his engine and knocked them down.

Mr Tokarski suffered grazes and a broken little finger while Ms Breen was thrown over the bonnet, fracturing her collar bone. 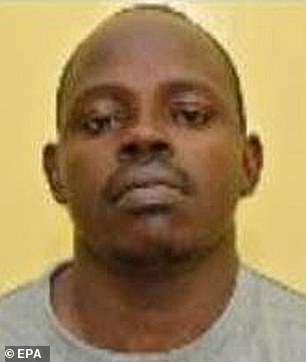 Jenny Hopkins, from the Crown Prosecution Service, said: ‘It was only quick reactions and good luck that stopped Salih Khater killing anyone.’ He is seen in a mug shot

Other people were trapped under their bikes, with some screaming in pain.

The defendant made a sharp turn into a slip road, going 32mph, forcing Pc Darren Shotton and Pc Simon Short to dive out of the way.

As armed police removed Khater from the car, the defendant confirmed he was acting alone but failed to explain himself.

Giving evidence, Khater said he wanted to return to Sudan to visit his sick mother and had Googled Downing Street and Westminster in his bid to find his way around central London.

He told jurors he ‘got lost’ and ‘panicked’ when he collided into cyclists and was trying to pull over when he crashed into barriers in the security lane.

He said: ‘I remember something made me panic. The car was not in my full control at the time.’ 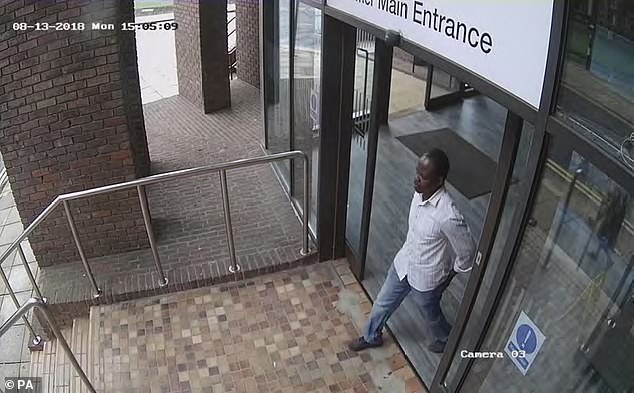 Khater leaving the Passport Office in Peterborough where he applied for a fast-track UK passport the day before he carried out the attack on August 13, 2018 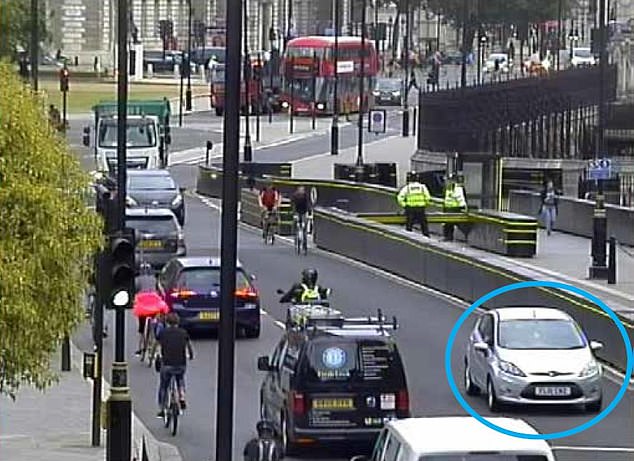 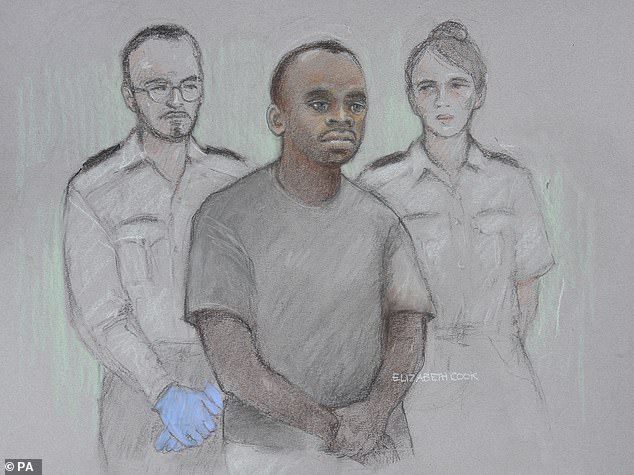 Khater at Westminster Magistrates Court on August 20, where he appeared before his Old Bailey trial

Khater made no reaction as he was found guilty of the charges.

Mrs Justice McGowan remanded him into custody to be sentenced on October 7. She ordered pre-sentence reports to help her determine Khater’s potential dangerousness.

Jenny Hopkins, from the Crown Prosecution Service, said: ‘It was only quick reactions and good luck that stopped Salih Khater killing anyone when he drove his car into cyclists and police officers outside Westminster.

‘His driving was so precise and determined that it was difficult for skilled accident investigators to repeat the manoeuvre he carried out.

‘Whatever his motives, this was not an accident. It was a deliberate attempt to kill and maim as many people as possible.’