By Sophie Borland, Health Editor For The Daily Mail

A weekly at-home saliva test to make it easier for the public to check themselves is being piloted by the Health Secretary.

It is hoped that saliva testing will be more effective and simpler than the currently used throat and nasal swab tests, which are difficult to take and are believed to return unreliable results in up to 30 per percent of cases.

If successful, the new procedure could massively increase the ease and accessibility of testing.

Up to 14,000 patients – including GP practice staff and their families, council workers, university employees and students – will take part in the four-week trial in Southampton.

Participants will put their saliva in a pot and take it to a hospital. They should receive the results within 48 hours. However, swab tests require patients to take a sample from the back of their nose and throat which can make them gag and provide incorrect results as a consequence.

Research has estimated that around 10 per cent of swab tests produce false negatives – where the result is negative even if someone has the virus – although this could be as high as 30 per cent.

The new procedure would enable the Government to expand the ease and accessibility of testing to identify virus patients who don’t show symptoms.

Matt Hancock said: ‘Saliva testing could make it even easier for people to take coronavirus tests at home without having to use swabs. This trial will also help us learn if routine, at-home testing could pick up cases earlier.’

He added that the trial will ‘benefit not only our but the global response’ to the virus.

The tests had been developed by Chronomics, a company founded by scientists from Oxford and Cambridge universities, and University College London.

The results of the saliva tests will be shared with the Government’s test and trace scheme so anyone with a positive result will be asked to provide details of their recent close contacts. 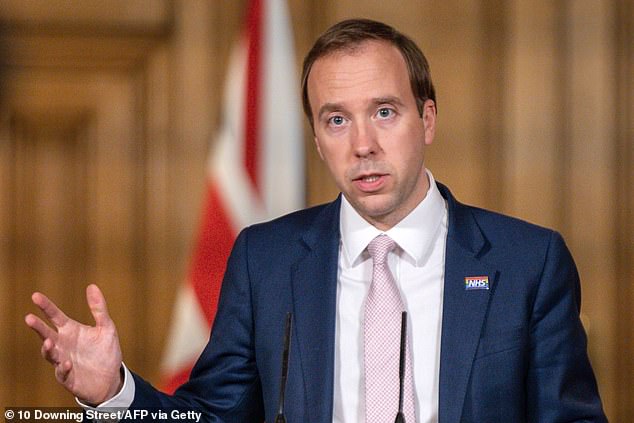 If the trial is successful, swab testing will be deployed nationally and officials at the Department of Health believe it could massively boost testing as well as allow for mass surveillance testing to identify asymptomatic cases.

It could help identify local flare-ups without the need for a widespread lockdown.

The Department of Health and Social Care said it was in talks with suppliers of saliva-based tests to facilitate their mass-production should the trial prove successful.

One of the key problems with the test and trace strategy is that patients are currently asking for a test only once they experience virus symptoms.

The Health Secretary has previously said that between 70 and 80 per cent of people with the virus do not have any signs at all meaning they are not entering the system and sharing their contacts.

But if the Government could make the process easier to do, they could ask members of the public to test themselves at random if they were close to a localised outbreak.

Ministers hope the test and trace strategy will enable them to safely ease the lockdown over the next few weeks and replace it with local restrictions where there are small scale flare-ups.

Professor Keith Godfrey, an expert in epidemiology at the University of Southampton, said: ‘Through this initiative we believe we can contribute to safely restoring economic activity during national relaxation measures.’

Cancer patients are being put at risk at specialist treatment centres due to a lack of testing, a leading charity warns.

Cancer Research UK has written to the Prime Minister urging him to improve the testing of NHS staff and patients massively.

The charity is particularly worried that doctors or nurses may be passing on the virus to patients when they are asymptomatic.

Earlier this month Health Secretary Matt Hancock said that between 70 and 80 per cent of those with Covid-19 had no symptoms.

Cancer patients are particularly vulnerable as their immune system is significantly weakened.

The charity says doctors and nurses working in specialist cancer centres should be tested at least once a week and patients should be checked whenever they come in for a diagnostic procedure, operation or appointment. In her letter to Boris Johnson, Cancer Research UK chief executive Michelle Mitchell says: ‘We are still worried that antigen testing is not happening at the pace and scale required.

‘If staff are unable to carry out cancer diagnosis and treatment in covid-protected environments and persuade patients it is safe to resume treatment, it will be difficult to restore services to pre-pandemic levels.’

Figures from Cancer Research UK revealed to the Mail earlier this month showed 2.4million patients were awaiting screening, diagnostic procedures or treatments as a result of the disruption to the NHS during the pandemic.

A Department of Health spokesman said: ‘All health and care staff are eligible for testing, including if they have no symptoms.’