A three-metre saltwater crocodile has been spotted swimming close to the shore of a popular beach.

Footage taken on Thursday at Four Mile Beach, in Port Douglas, north of Cairns, shows the terrifying moment the beast lurks in the water near safety netting for swimmers.

At one point the crocodile uses its mouth to nudge the net surrounding the beach, popular with families.

The beach was closed for an hour when the crocodile was spotted.

A spokesperson from Surf Life Saving Queensland (SLSQ) said there have been multiple crocodile sightings at Port Douglas in the last few years with the most recent in July 2019.

In Cairns alone six crocodiles have been spotted at beach areas in the last six months.

SLSQ said they would continue to monitor the coastline with a drone for the next few days.

‘The incident serves as a timely reminder to always swim at patrolled locations, between the red and yellow flags, where lifeguards are on duty to watch over beachgoers and monitor the water for marine creatures,’ a spokesperson said.

‘If a beach has been closed due to a croc sighting, do not enter the water, stay clear of the water’s edge, and always follow the advice of lifeguards and lifesavers.’

It urged anyone who spotted a crocodile to report it immediately to CrocWatch on 1300 130 372. 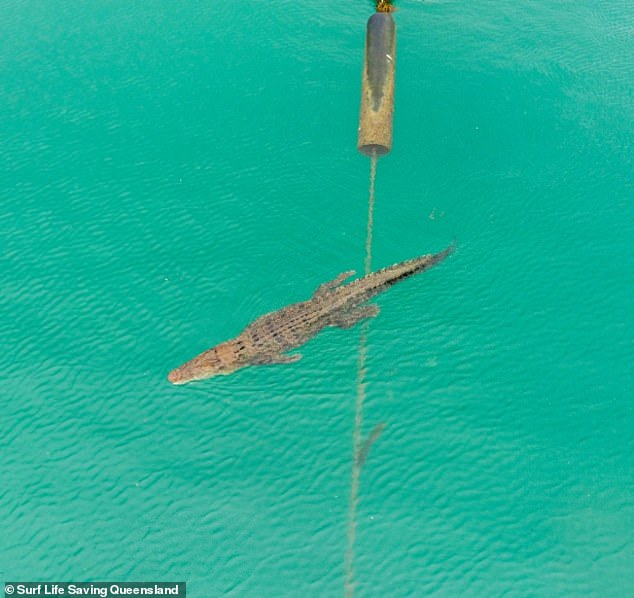