Just a day after flying in a record four million surgical masks to help the UK fight the coronavirus, Mail Force was on the road again yesterday, kickstarting a new donation of 700,000 pieces of personal protective equipment to some of Britain’s best-known voluntary organisations.

A truck packed with more than 300,000 masks and hospital aprons pulled up yesterday afternoon outside the Salvation Army’s main distribution centre in Wellingborough, Northants.

It is just the first of several cargoes of kit destined for Salvation Army hubs in order to protect some of the most vulnerable people across the UK – from pensioners to young victims of modern slavery gangs.

When the coronavirus crisis began, the ‘Sally Army’ was among the first organisations to step forward with a helping hand, offering vans and volunteers to deliver food parcels and distribute thousands of face shields around the National Health Service.

Yet for the last three months, its 250 charity shops and 13 donation centres have been shut.

Because staff were not classified as ‘key workers’ (why on earth not?), they could not even empty the 8,000 steel clothing banks dotted around the UK.

So, now that this grand old charity could do with a helping hand, Mail Force is more than happy to oblige.

Yesterday’s delivery alone weighed three tons, and will not only be distributed across the Salvation Army’s own network of 12 care homes and more than 80 housing centres for the homeless; the Sally Army has kindly agreed to help Mail Force distribute it to other charities including Age UK, Turning Point and Leonard Cheshire.

Like the entire charitable sector, these organisations have all suffered a major downturn in fundraising and donations since the start of the pandemic. They all desperately need PPE in large quantities if they are to keep both their staff and beneficiaries free from infection in order to maintain their important work.

But at the very moment they need this kit most, budgets are being cut back just as the cost of PPE shoots up.

So, the generosity of Mail Force donors works in two ways. Not only does it slash the chances of infection but it also frees up resources for use elsewhere.

‘This generous donation will save lives and money and we are very grateful to Mail Force,’ said Malcolm Page, the Salvation Army’s assistant director of homelessness services, yesterday.

‘While we haven’t yet run out of equipment, there were moments when I was very worried.

‘We are currently spending around £24,000 per week on PPE to keep our staff and vulnerable service users safe. Having such a big donation means we can re-channel some of that money.’

Mr Page and his teams responded to the coronavirus outbreak instantly by reducing shift sizes and interaction between different floor levels at the Salvation Army’s ‘Lifehouses’, as their supported-living hostels for the homeless are known.

At a time when the historical evils of slavery are dominating public discourse, the charity is in the vanguard of dealing with the modern slave trade.

Some gangs are known to be trafficking migrant children and women into the sex trade from places such as Albania or Nigeria, while others keep unregistered Eastern European or Vietnamese manual labourers on a pittance in squalid conditions.

Those who manage to escape are looked after by the Salvation Army under a government programme created in 2011.

It is one which has helped secure many prosecutions and the charity currently has nearly 100 residents in half a dozen safe houses, all of which need PPE.

‘We haven’t had any confirmed infections yet and so we want to say a big thank you to those who have given us this vital PPE,’ said Emilie Martin, head of operations for the charity’s modern slavery unit.

The Salvation Army started life in London’s East End in 1865, under the leadership of its first General, William Booth. It opened its first centre for the homeless in 1888. 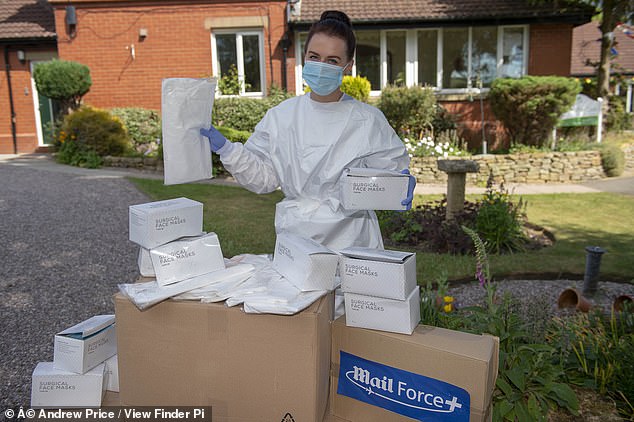 Today, Lee Parker and his team at the charity’s Wellingborough trading base stock more than 30,000 items – from cap badges to casual clothing – for distribution to Salvationists in more than 130 countries.

But, right now, the most sought-after commodity is PPE as thousands of volunteers prepare to resume fundraising operations.

The charity is also helping other organisations receive Mail Force PPE, among them Leonard Cheshire. Founded by the wartime RAF hero in 1948, its 4,700 staff help 2,700 people with a range of disabilities in 120 care homes across the UK.

‘This donation from Mail Force through the Salvation Army is particularly generous and indicative of the tremendous cooperation apparent in our sector and beyond during the pandemic.

‘We are extremely grateful to Daily Mail readers for their generosity and our friends at the Salvation Army for their logistical expertise in getting PPE where it is urgently needed.’

Last year another beneficiary, Turning Point, helped 110,000 people with a wide variety of disabilities and mental health issues, many of them in a residential setting. Here, again, PPE is vital.

‘Future funding is uncertain so any support for frontline services is welcomed,’ said Clare Taylor, national director of operations.

‘This is why we are hugely grateful for this donation which will be a great help in protecting our amazing staff and the people we support in these testing times.’

The sentiment was echoed by Caroline Abrahams, charity director of Age UK, which relies on PPE if it is to continue offering care services and support for the elderly in their own homes.

‘This is a period of great anxiety for everyone, but especially for older people and their loved ones,’ she said yesterday.

‘Age UK is determined to be there for older people who need our help and especially for those who have no one else to turn to in this time of crisis.

‘Thank you to those who have donated to Mail Force and to the Salvation Army for making sure we can respond to the growing needs and unprecedented demand we’re seeing.’

As all these charities try to make ends meet in the days ahead, they can at least rest assured that they don’t have to scrimp on one of the essential bulwarks against a second wave of the coronavirus.

And should the worst come to the worst, they know where to find us.