Samantha Womack on playing psychopaths and home-schooling her daughter

Samantha Womack has made quite a career out of playing outwardly unhinged women, from her nine years as the nation’s favourite psychopath, Ronnie Mitchell, in EastEnders to her latest role as Rachel Watson, the alcoholic anti-heroine in a touring production of Paula Hawkins’s 15 million-selling psychological thriller The Girl On The Train, which was also turned into a film with Emily Blunt. Her death by drowning on EastEnders in January last year drew an audience of nine million and caused an outcry from viewers mourning the loss of the lovably psychotic nightclub owner whose storylines included killing an ex-lover, stealing a baby and an attempted poisoning.

Does this mean she is forever going to be cast as crazy women?

Samantha Womack has made quite a career out of playing outwardly unhinged women, from her nine years as the nation’s favourite psychopath, Ronnie Mitchell, in EastEnders to her latest role as Rachel Watson, the alcoholic anti-heroine in a touring production of Paula Hawkins’s 15 million-selling psychological thriller The Girl On The Train

‘It depends on the definition of crazy,’ she says. ‘I don’t see Rachel as crazy, I see her as someone who has had a series of terrible things happen to her [Rachel’s husband left her, she started drinking and then lost her job], and whose reaction is just: “F*** it! I’m not going to think about consequences, I’m not going to conform any more.” I get that. I like that. There have been times in my life when I have had exactly that thought. I’m committed to making the stage version of The Girl On The Train something a little different, something my own. I want to give audiences something unexpected.’

She adds: ‘I was never conventional. I don’t think there is a right way to do things, just one way to live. I’ve always been fascinated by different approaches to life and eccentric people. As an actress I am drawn to these characters like Rachel, who are also not the women people think they are. She likes to drink but I don’t want to play a clichéd drunk, falling about. I think it’s much more in the way you hold yourself, the manner you have – it’s so much more subtle to underplay it. I have learnt from the very best watching Steve McFadden [Phil Mitchell in EastEnders], who does the very best portrayal of drunkenness of any actor I’ve seen.’

Womack, whose trademark blonde hair has been dyed a dark, glossy chestnut brown, says she was upset that her character was written out of EastEnders but more devastated that her views on Ronnie were not taken into consideration. ‘I told the producers that it was all getting too much for Ronnie, going from one trauma to the next. I came into acting through theatre, which is a very collaborative process. But in EastEnders it’s just a relentless schedule and there isn’t that collaboration. I knew Ronnie. I was Ronnie for nine years and there would be so many times when the plot would require her to be more murderous or bad, and I’d say “But why does she want to do this?” and there would be no response apart from, that is your script, that is what you do.

‘I didn’t want to leave, I didn’t want her to die. I have left it behind but I know Ronnie hasn’t completely gone from me yet.’

Womack was not short of offers after leaving the show, having starred opposite Colin Firth in the Kingsman movies, but she has chosen to focus on her first love, theatre.

The daughter of hippy parents (her father was a musician, her mother an actress and musician), Womack’s family dynamic changed when her father left and her mother married her second husband, a doctor whose work took the family all over the country. She spent much of her childhood with her grandmother, Sheila Holt, who worked as a choreographer on the QE2 and who used to take Womack with her on cruises. ‘She was the reason I got into this business. She had all sorts of actors and performers staying with her and I felt this was a world I just had to belong to.’

At the age of 15, she left home to attend acting classes at the Sylvia Young school in London and began taking small parts on stage and television. ‘I now have a daughter who is a year younger than I was then and I can’t believe I got a job in a nightclub and I got work. I was totally fearless, but looking back I was terrified most of the time because I didn’t really know what I was doing.’ 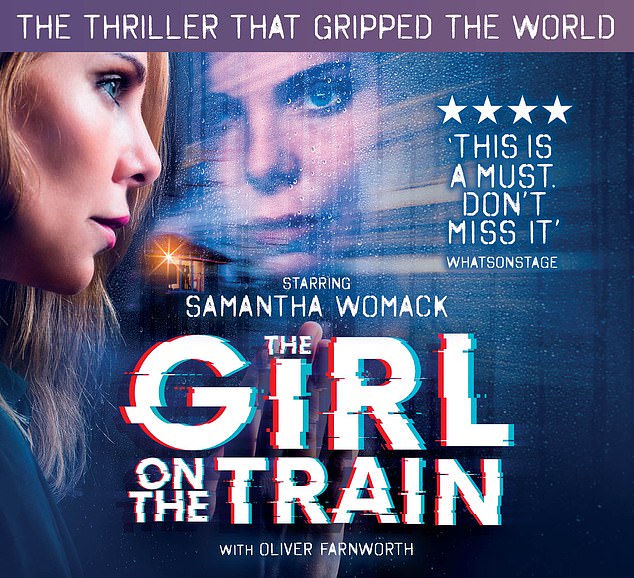 ‘I’m committed to making the stage version of The Girl On The Train something a little different, something my own,’ says Womack

She credits acting – along with her marriage to actor Mark Womack – for grounding her life. She home-schools her daughter Lili and lives in the country just outside London. Given her frantic work schedule, the decision to home-school is perhaps an unusual one.

‘My older son Ben really suited school but it wasn’t totally right for Lili. She’s very creative, she’s into art and I had listened to a TED talk by Ken Robinson [who believes the education system kills creativity] and it felt like the right thing to do. She has tutors for science subjects. Mark studied fine art before he went to Rada and he does Shakespeare with her.

‘Before I went into it, I researched what was required and I studied the coursework in the subjects I felt I could manage. I do a lot of the history and philosophy with her, and obviously the drama. I also bring her with me when I work. She sits in script meetings and shadows the stage manager. She is absorbing a very wide set of skills.

‘You have your moments when you think, Oh God, have I got this right? But she’s happy and she sees all her friends from school socially every week so she doesn’t miss out on hanging out with kids her own age.’

‘The Girl On The Train’ begins a tour of the UK and Ireland in Milton Keynes on January 21, girlonthetrainplay.com