Same-sex couple in Texas turned down as foster parents

A same-sex couple in Texas have sued the federal government after they were turned down as foster parents by the US government’s Unaccompanied Refugee Minors Program (URM), allegedly because they don’t ‘mirror the holy family.’

Lamda Legal filed a lawsuit against the US Department of Health and Human Services (HHS), on behalf of married couple Fatma Marouf and Bryn Esplin, on Tuesday in the US District Court for the District of Columbia.

The United States Conference of Bishops (USCCB) was also named in the lawsuit.

The lawsuit alleges that a local charity executive acting in the capacity of a federal contractor allegedly told Marouf and Esplin in February 2017 that foster parents must ‘mirror the holy family,’ and they would not ‘qualify’ to foster a child.

‘Being denied the opportunity to foster a child because we don’t “mirror the Holy Family,” [which is] clearly code for being a same-sex couple, was hurtful and insulting to us,’ Esplin said.

‘More than that, though, insisting on such a narrow, religious view of what a family must look like deprives these children of a nurturing, supportive home.’

A federal lawsuit filed in Washington, DC on Tuesday claims a federal contractor told same-sex couple Fatma Marouf (left) and Bryn Esplin (right) of Texas that foster parents for refugee minors must ‘mirror the holy family’ and they would not ‘qualify’

The complaint focuses on statements allegedly made by executives at Catholic Charities of Fort Worth (CCFW).

The women claim the CCFW’s Director of International Foster Care is the person who told them they would not qualify as foster parents in the URM.

They also claim that a woman named Donna Springer, chair of the executive committee of CCFW’s board of directors, told them that none of the 700 children in the URM were LGBT, in response to their direct inquiry on the matter.

In carrying out the mission of the URM, the federal government contracts with the USCCB, which oversees the CCFW as one of its subsidiaries. 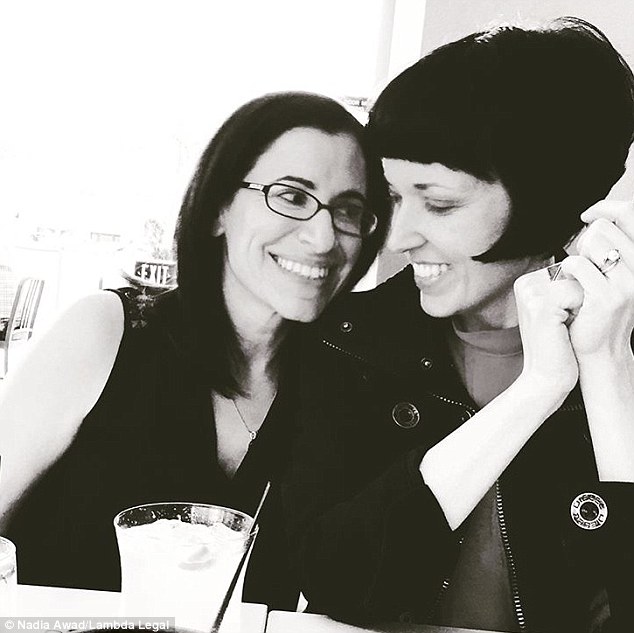 The women claim the CCFW’s Director of International Foster Care told them they would not qualify as foster parents in the URM.

‘The federal government was on notice when it funded USCCB that this organization refuses to provide services to same-sex spouses at taxpayer expense,’ Lambda Legal Senior Counsel Kenneth D Upton said.

Beyond the constitutional discrimination claims being brought in the complaint, Esplin and Marouf said that they were ‘shocked’ and ‘hurt’ by such a denial, not only to them, but also to refugee children in need of homes.

‘It’s not just us that are being denied something,’ Esplin said. ‘It’s the child, or that particular sibling set, that’s also being denied.’ 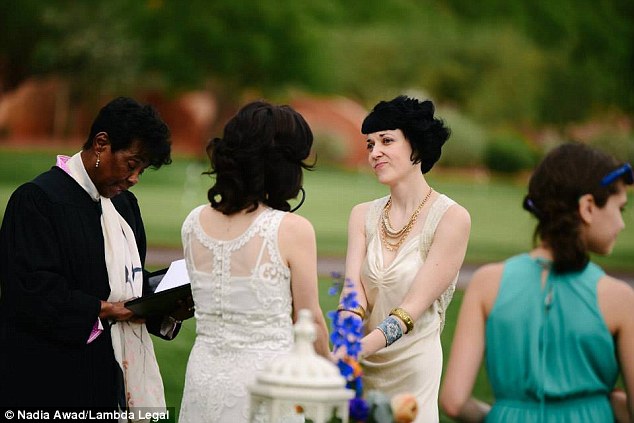 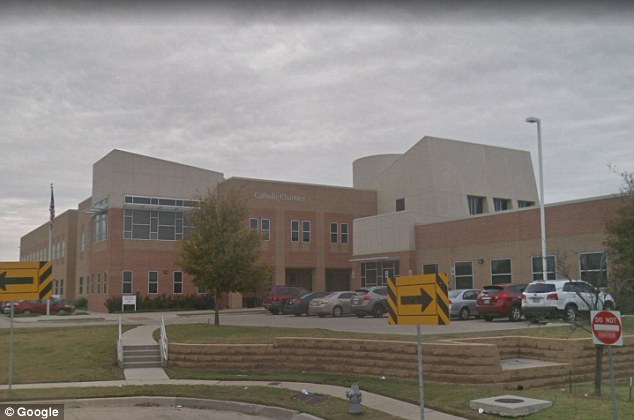 The complaint focuses on statements allegedly made by executives at Catholic Charities of Fort Worth (CCFW); CCFW headquarters are shown here

Esplin is an assistant professor of biothetics at Texas A&M University’s medical school.

Marouf is a law professor at the same university’s School of Law. She’s also the director of their Immigrant Rights Clinic.

‘I think as an attorney who works with refugee kids and unaccompanied minors, I know that a lot of these kids, especially the unaccompanied minors coming from Central America, have gone through hell to get to the US, and I’ve seen firsthand their need to find families here, how they’ve often been separated from their parents of entire families,’ Marouf said.

She added: ‘There are a lot of LGBT children who are coming as refugees who get refugee status because of their sexual orientation or gender identity. To say that you can’t have families of certain sexual orientations or gender identities to be foster parents to them, when they, themselves, may have gotten the refugee status for that reason, is really sending those kids a mixed message that they’re not OK the way they are.’ 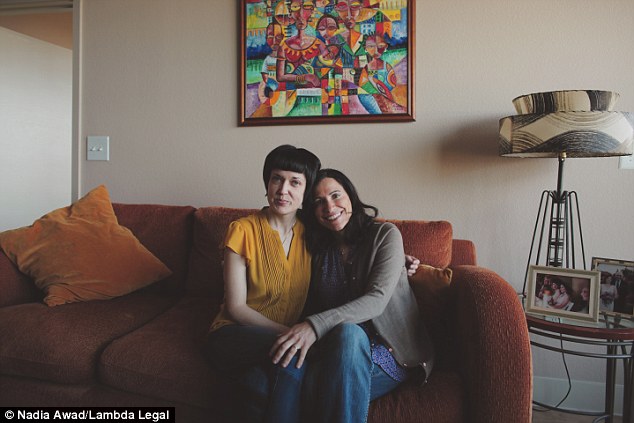 Beyond the constitutional discrimination claims being brought in the complaint, Esplin and Marouf said that they were ‘shocked’ and ‘hurt’ by such a denial, not only to them, but also to refugee children in need of homes 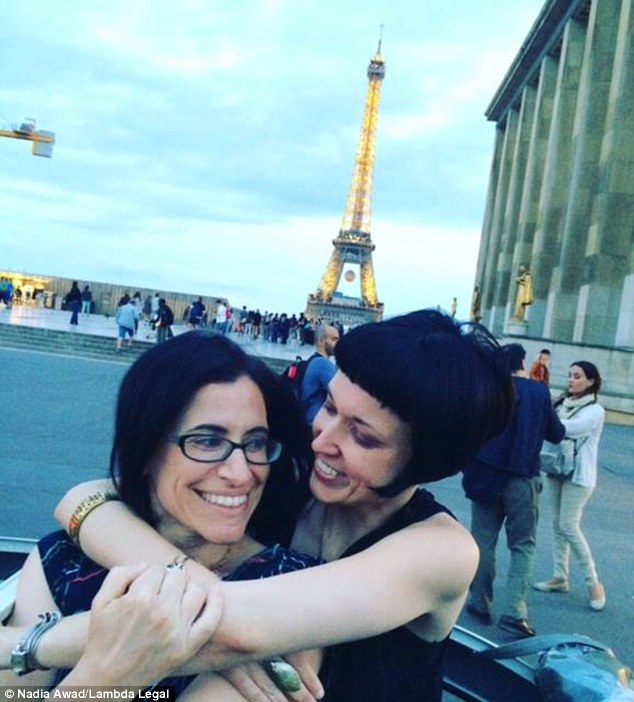 Esplin (right) is an assistant professor of biothetics at Texas A&M University’s medical school; Marouf is seen at left

Lambda Legal said that Marouf emailed the Office of Refugee Resettlement on the same day that the two women were told they did not ‘mirror the holy family,’ but she did not hear back from that office until two months later. When she did hear back, they asked for the names of the officials the two women had spoken with, and have heard nothing more, since.

A spokesperson for CCFW has denied that Springer had any contact with the couple, but said that the then-director of child welfare services talked to them over the phone.

CCFW also denies that anyone told the Texas couple that none of the 700 children were LGBT.

‘We do not screen or otherwise ask the children we serve to self-identify if they are LGBT,’ Katelin Cortney, the charity’s communications director told the Dallas Morning News.

‘We train our foster families to accept children from all cultures and walks of life so they can be as prepared as possible to welcome someone new into their home.’

Both HHS and USCCB are named in federal complaint.

HHS told ABC News that the federal agency does not comment on pending litigation. The USCCB could not immediately be reached for comment.

The women have decided to move forward with the case because of how it may impact other members of the LGBT community, as well as children awaiting foster parents.

‘When there’s so many kids out there who need a loving home, and there’s such a shortage of foster families in Texas, in general, to be turned away just because of our sexual orientation seemed very shortsighted,’ Marouf said.

‘[It] doesn’t take into account the diversity of refugees that are coming, and what their religions are or their cultural backgrounds are, and how we might actually be a pretty good fit for some of those kids.’

Marouf and Esplin have been married for nearly three years. 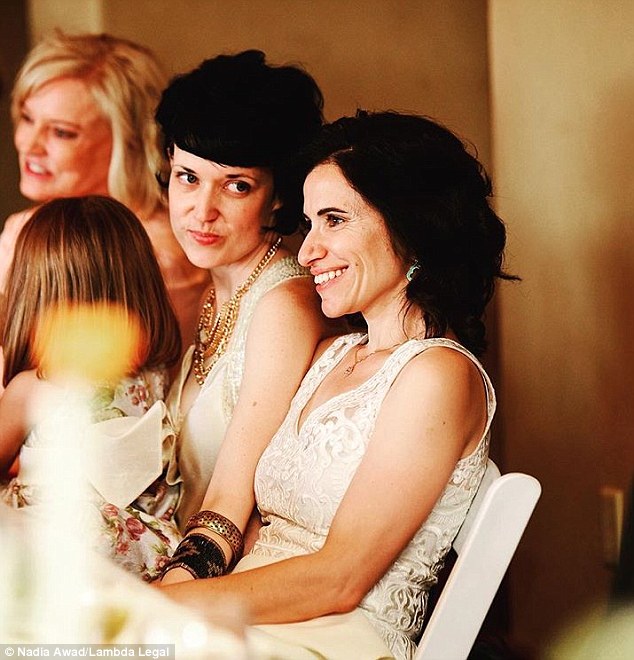 Marouf (right) is a law professor at Texas A&M School of Law, and the director of their Immigrant Rights Clinic; Esplin is seen at left