Samsung announces its most expensive smartphone yet

Samsung has launched two new foldable smartphones with flexible glass that folds down the middle of the screen, including its most expensive device yet.

The Korean tech giant lifted the lid on several new products at its Unpacked event on Wednesday, including the Galaxy Z Fold 4.

Galaxy Z Fold 4 comes with a new taskbar along the bottom of the phone, giving a more ‘PC like experience’ where users can easily see their apps.

Samsung has also launched the Galaxy Z Flip 4, which flips open like a retro 90s phone thanks to a horizontal hinge through the middle of the screen.

Compared to last year’s Flip model, it has smaller bezels and a slimmer hinge for a perfect shape and better grip, Samsung says.

At the firm’s Unpacked event on Wednesday, the Korean tech giant lifted the lid on the Galaxy Z Fold 4, its most expensive smartphone yet 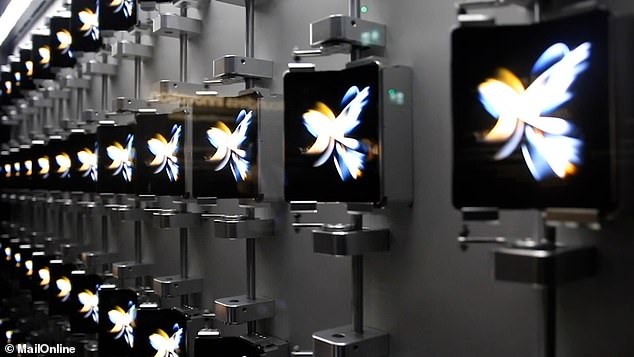 Just like its predecessors, the Galaxy Z Fold 4 has a vertical hinge down the middle and essentially acts as a 2-in-1 device 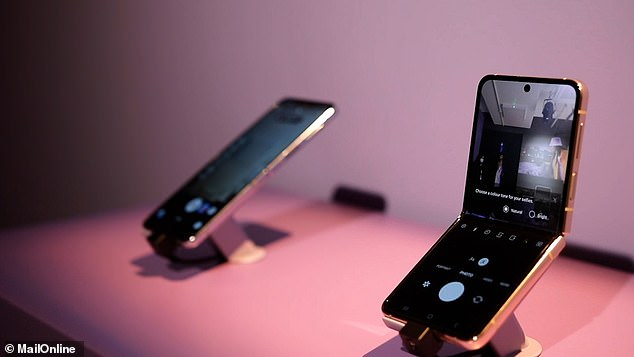 Samsung has also launched the Galaxy Z Flip 4, which flips open like a retro 90s phone thanks to a horizontal hinge through the middle of the screen

Both of the smartphone models are 5G compatible, come with IPX8 water resistance and can be folded and unfolded more than 200,000 times.

‘Ultimately maintaining a premium for what some users will see as incremental upgrades is always a hard sell,’ he told MailOnline.

‘This is in stark contrast to Apple with everyone eagerly anticipating the arrival of a new iPhone every year.

‘It seems the focus has been on software as the devices essentially look the same.’

Just like its predecessors, Galaxy Z Fold 4 has a vertical hinge down the middle and essentially acts as a 2-in-1 device.

It has two screens – a smaller one on the outside that displays basic information when it’s folded, and the larger interior screen that’s like a tablet.

Samsung has brought a taskbar to the bottom of the larger screen that better displays all a person’s apps, much like Windows on a PC. 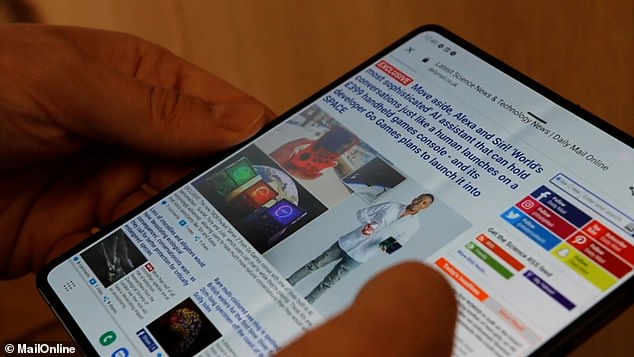 Galaxy Z Fold4 comes with a new taskbar feature along the bottom of the phone, giving a more ‘PC like experience’ where users can easily see their apps 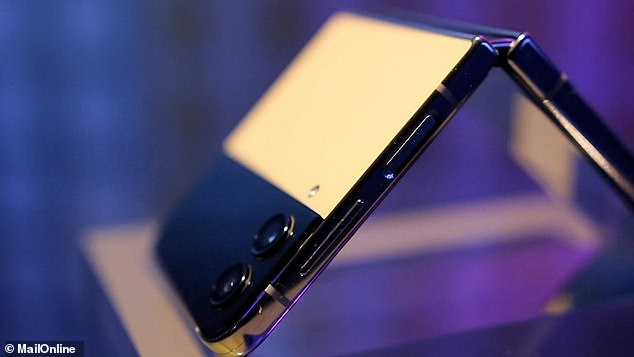 Galaxy Z Flip 4 is the third of Samsung’s ‘Flip’ models, inspired by 90s flip phones but with foldable glass 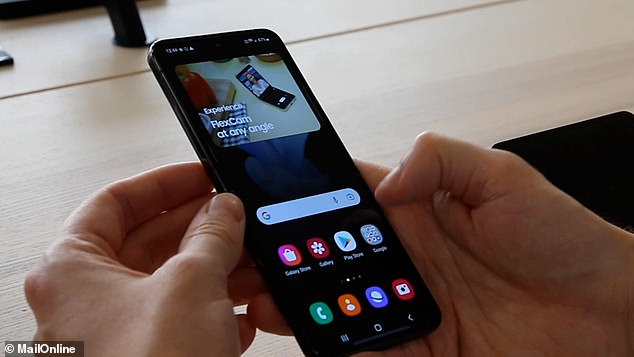 Flip 4’s main screen measures 6.7 inches, while the smaller cover screen on the outside is 1.9 inch, like last year’s Flip 3

The new phones are the latest in the Samsung’s line of foldable phones.

Now, Samsung has revealed the Galaxy Z Fold 4 and Flip 4.

Users can drag the apps to open them on a split-screen – so, for example, Facebook addicts can display Messenger and the Facebook app next to each other and keep an eye on both of them at the same time.

The Fold 4’s interior screen measures a hefty 7.6 inches diagonally – the same as the one on the Fold 3, which was released last year.

Fold 4 also has smaller bezels, and that means that there’s more space for the screen while the phone itself stays the same size as last year’s Fold 3.

Samsung said the Fold 4 lasts longer on a single charge and plays videos for longer. It’s also compatible with the S-pen stylus, which is sold separately.

Flip 4, meanwhile, is smaller and flips open thanks to a horizontal hinge through the middle of the screen, rather than a vertical one.

Users can bend the device at a 90-degree angle for taking videos and pictures and enjoying video-chat hands-free.

The new Flip also lets users reply to someone’s message with emojis from the cover screen – so without having to open the phone.

It also includes a 65 per cent brighter sensor for better photos, the ability to take selfies when closed and increased battery size.

Flip 4’s main screen measures 6.7 inches, while the smaller cover screen on the outside is 1.9 inch, like last year’s Flip 3. 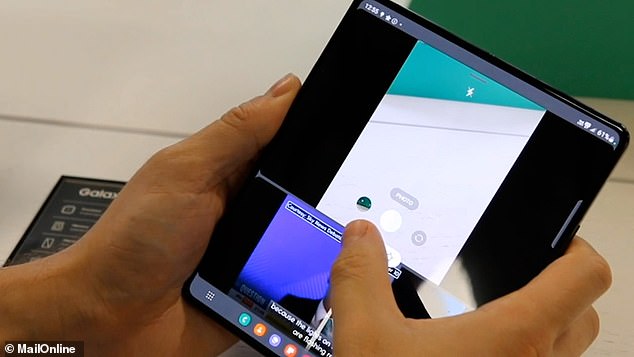 With the Fold 4, users can drag apps to open them on a split-screen – so, for example, Facebook Messenger and the Facebook app can appear next to each other 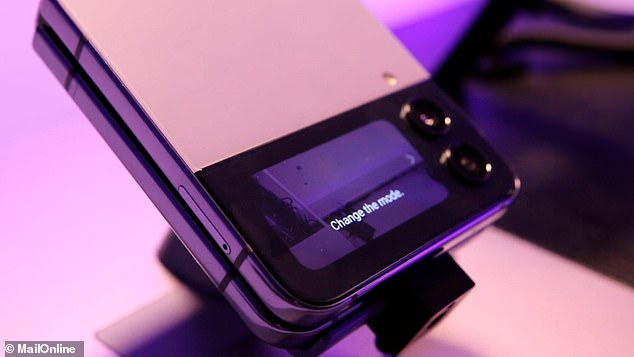 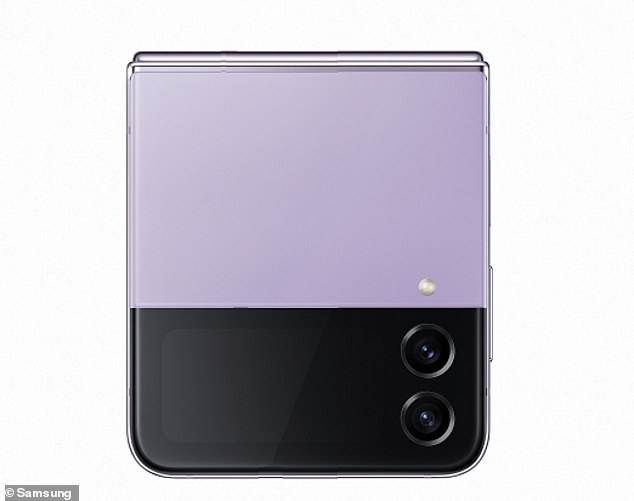 The smaller and cheaper of the new Samsung smartphones, Flip 4, comes in either Graphite, Bora Purple (pictured), Pink Gold or Blue 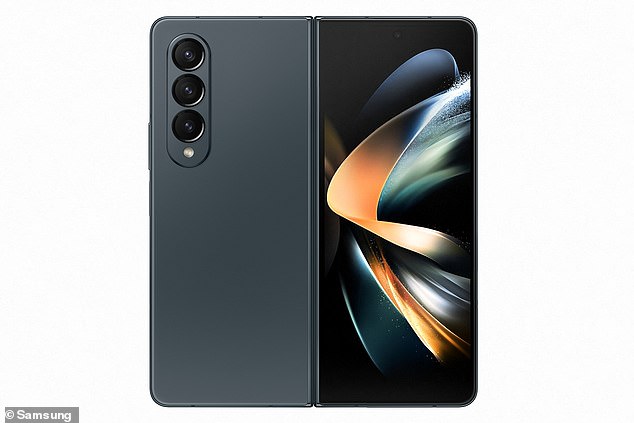 Both have a new improved battery life, and are made from stronger and sturdier materials.

They have scratch-resistant glass and are 60 per cent stronger and more durable than the Watch 4.

In a push to be more eco-conscious, 90 per cent of Galaxy devices now include at least one component made of recycled materials, Samsung says.

Pescatore at PP Foresight told MailOnline that Samsung will ‘continue to face an uphill task’ of getting its wearable devices into people’s hands unless they’re bundled in for free.

He also said he generally doesn’t expect foldable devices to be high on the wish list of smartphone fans. 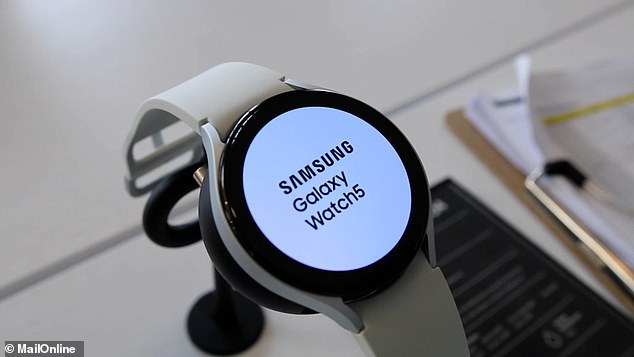 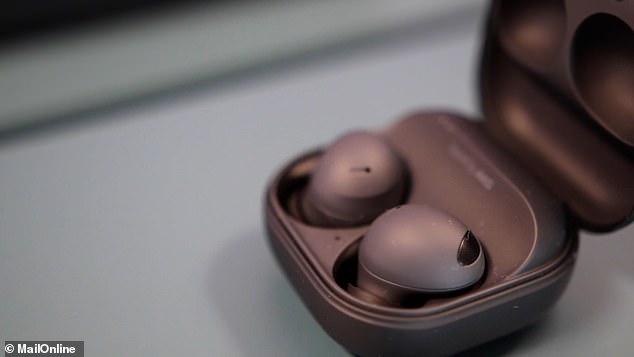 ‘Unfortunately, foldable rollable devices aren’t addressing a problem,’ he told MailOnline. ‘That in itself explains the lack of consumer appetite.

‘More time and investment is needed to raise the awareness and potential benefits of this new and exciting category.’

‘Initial forays into foldable devices have reignited the market and provides a lot of excitement around this new category. It is still early days, and they will evolve significantly.’

Samsung’s original folding device – the Galaxy Fold – was years in the making from its initial idea and patent stages.

It was released in September 2019, following technical troubles that held up its worldwide launch, including reports of broken displays after only a few days of use.

The first generation Galaxy Z Flip was released in February 2020, although it was superseded six months later by a 5G-compatible version.

Samsung debuted several new folding gadgets at CES 2022 in Las Vegas,  both smartphones and laptops that either have a S- or G-shape design.

The ‘S’ design features three panels the fold out to make a larger tablet-like device, while the ‘G’ folds inward on all sides, allowing you to store away the device without scratching the display.

During a presentation at CES, Samsung showcased the Flex Note that went from a 13-inch tablet to 17 inches when fully expanded, and the Flex Slidable smartphone with a display that extends to the side. 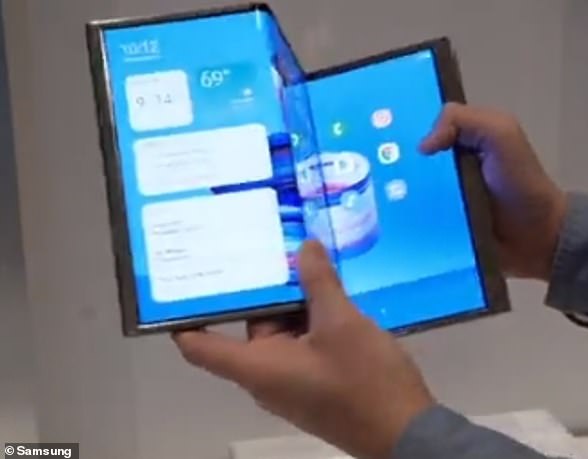 Samsung debuted several new folding gadgets at CES 2022, smartphones and laptops (pictured), which either have a S- or G-shape folding design

Although these devices are concepts, Samsung did launch a new smartphone at the consumer tech event – the Galaxy S21 FE.