Samsung has officially unveiled its Galaxy Note 20 smartphones, featuring massive screens and the ability the stream Xbox games over the cloud.

Designed for ‘Note loyalists’, the standard Note 20 and Note 20 Ultra both support 5G and are optimised for game streaming via Xbox Game Pass, Microsoft’s video game subscription service that gives users access to a catalogue of games.

More than 90 games should be available on the smartphone via the cloud at launch, making the Galaxy Note 20 a ‘portable game console’.

Both phones are larger than their equivalent Note 10 models, released last year – which measured 6.3 inches and 6.8 inches respectively.

The new phones run Android 10, come with a triple camera system and have a new more powerful S Pen stylus, a characteristic feature of Samsung’s Note series, that responds to gesture commands.

The smartphones, described as ‘the most powerful Note line yet’ by the Korean company, are available to pre-order on the Samsung website from today (August 5) and go on sale on August 21.

The company also unveiled the Galaxy Tab S7 and S7 Plus tablets, the Galaxy Watch 3 smartwatch, Galaxy Buds Live, and offered a first look at the Galaxy Z Fold 2, its next-generation foldable smartphone.

The new devices were unveiled at Samsung’s Galaxy Unpacked event, which took place online today due to the coronavirus pandemic.

Samsung said the Galaxy Note 20 series is a ‘productivity powerhouse’ that works ‘like a computer and lets you game like a pro’.

‘Technology has played a vital role in keeping us connected during these unprecedented times,’ said Conor Pierce, corporate vice president of Samsung Electronics for UK & Ireland. 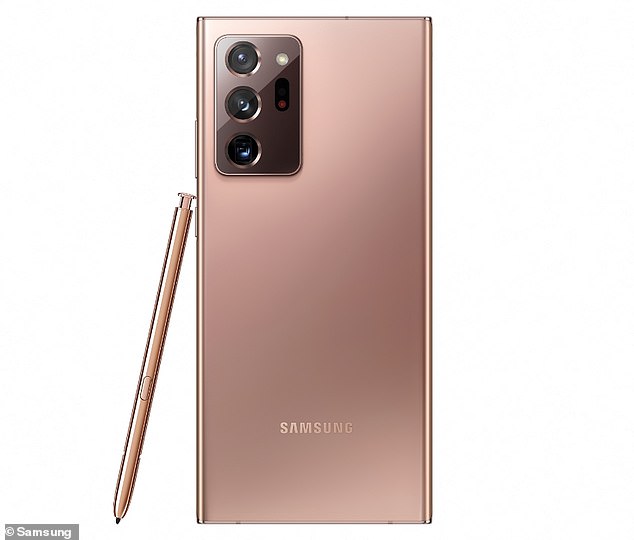 The Note 20 Ultra. The series comes in two versions: this Note 20 Ultra 5G, designed for users ‘who demand the ultimate in power and productivity’, and Galaxy Note 20, for ‘broader Note users looking to maximise their time for work and play’ 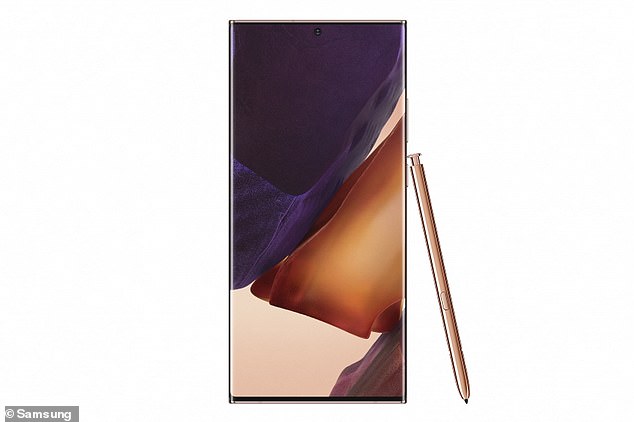 Samsung is also bringing its Microsoft partnership to the entertainment side of Galaxy Note 20 series, taking virtual play to the next level

‘Now more than ever, our customers are looking for products that deliver against this and work seamlessly together.

‘Whether it’s through work or play, the ecosystem we have launched today is designed to help you get the most out of life.

‘With our Note 20 range and Tab S7 Plus now powered by 5G, we are not only super-charging the connected experience, but also strengthening Samsung’s 5G leadership in the UK.’ 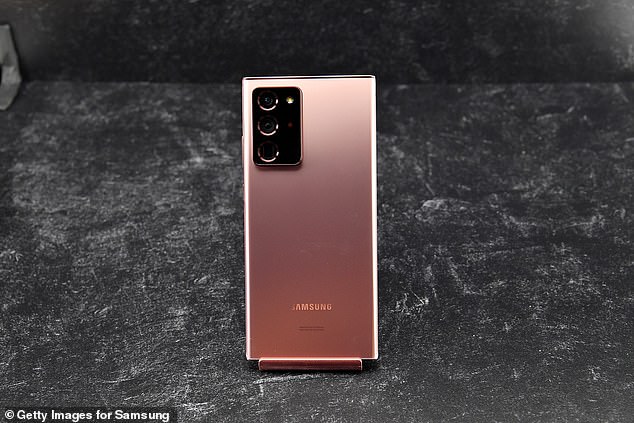 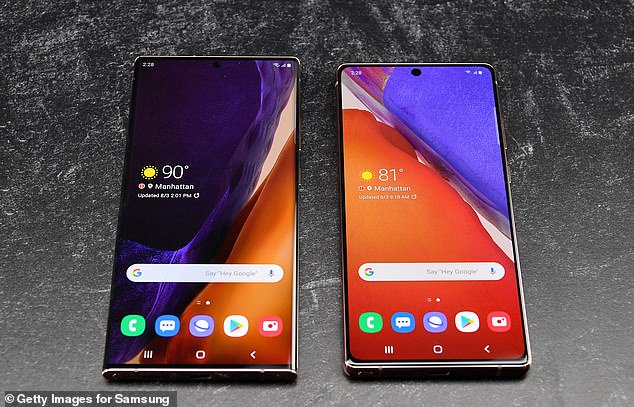 Samsung is bringing its Microsoft partnership to the entertainment side of Galaxy Note 20 series to take ‘virtual play to the next level’.

The Note 20 series lets users play their favourite PC and console games with Game Pass, which offers instant access to a curated library of more than 100 popular games from the cloud.

‘Every level and battle is powered by hyper-fast, ultra-low latency 5G and Wi-Fi 6 with optimised gaming latency,’ Samsung said.

‘Plus, with a large and immersive display with smooth gaming experience thanks to the fastest processor in a Galaxy yet, Galaxy Note 20 series is a pro-gaming set-up that fits in your pocket.’ 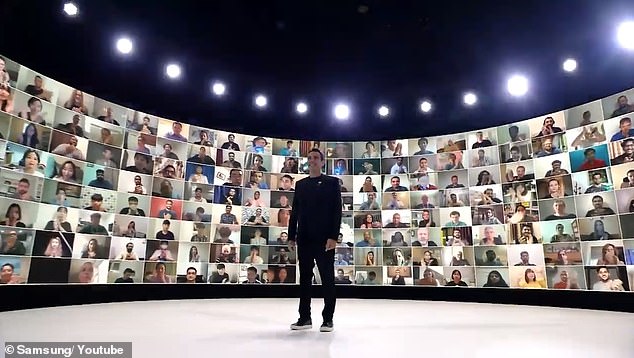 Samsung Galaxy unpacked event 2020, which is being held solely online due to the coronavirus pandemic 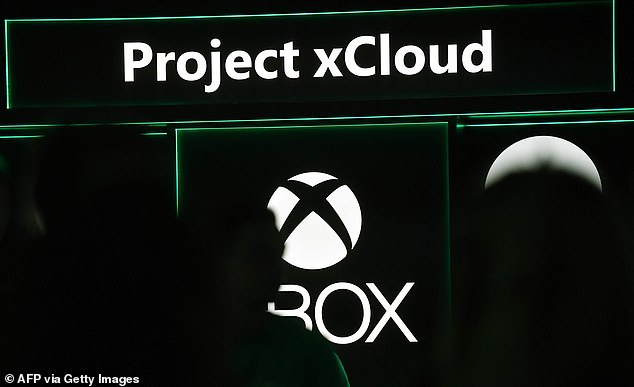 Both devices are optimised for game streaming via Xbox Game Pass, Microsoft’s video game subscription service that gives users access to a catalogue of games

The S Pen balances enough drag to give a writing experience that more closely resembles writing on paper.

The new ‘Anywhere actions feature’ also lets users control the phone by just waving the pen in front of the device.

For example, if users want to return to the home screen, they can just press the upper button on the S Pen or wave the pen in front of the phone’s screen to control apps.

For the two devices, Samsung is cooperating closely with Microsoft to offer automatic synchronisation with OneNote, Microsoft’s note-taking software, as well as gesture commands. 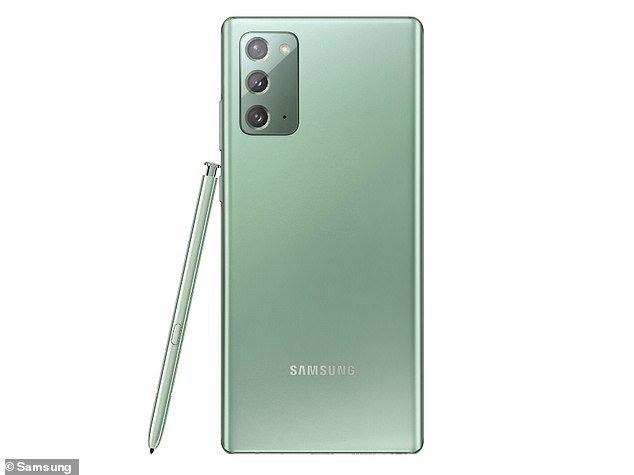 As for cameras, both Note smartphones include three rear cameras and one front camera.

Of the rear cameras, the Note 20 has a 64 megapixel main camera and 3x hybrid zoom, while the Ultra gives photography enthusiasts a 108 megapixel wide lens and an optical 5x zoom on another 12 megapixel camera.

Both of the main cameras on the Note 20 and Note 20 Ultra will support video recording of up to 8K recording – meaning they’ll have an ultra-fine display resolution with a width of approximately 8,000 pixels. 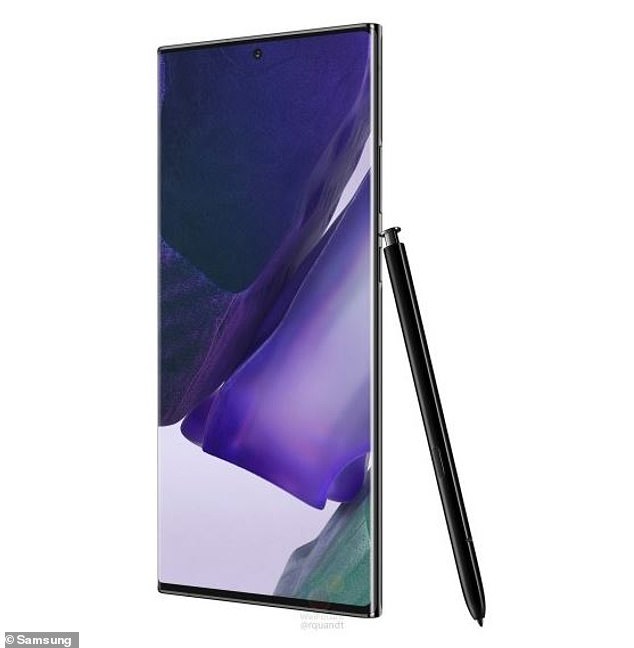 Both models reportedly offer dual SIM support and are IP68-certified, meaning they survive up to 30 minutes in water nearly five feet (1.5 metres) deep.

The Note 20 standard is fixed with a 4300mAh battery and Ultra comes with a 4500 mAh battery – both of which can be charged wirelessly and charged to 50 per cent of their capacity in 30 minutes. 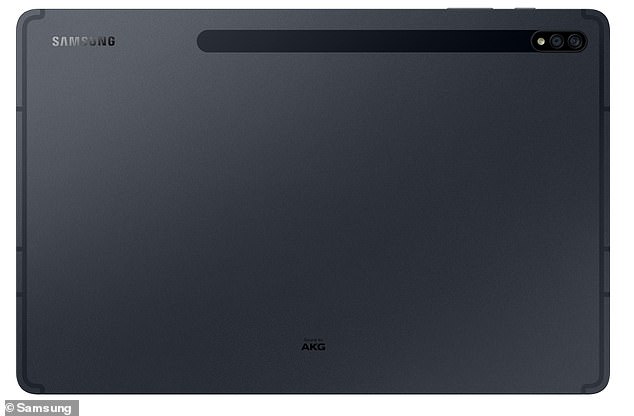 Samsung has also unveiled the Galaxy Tab S7 and Tab S7 Plus, described as two versatile tablets that combine the capability of a PC, the flexibility of a tablet, and the connectivity of a smartphone.

With the latest processor and Wi-Fi 6 connectivity, both tablets come with two large displays – 11-inch and 12.4-inch, respectively.

The Tab S7 Plus is also available in a 5G compatible variant, ‘ensuring you are always connected’.

Galaxy Tab S7 and Tab S7 Plus come with an upgraded S Pen and Samsung Notes featured on Galaxy Note20 series to provide a PC-like experience.

As well as support for Microsoft applications such as Outlook and OneNote, Note devices will feature Wireless DeX – a wireless version of its DeX capability, originally launched in 2017, that extends the phone’s display to a desktop.

Samsung has also announced a new set of earbuds – the £179 Galaxy Buds Live – with a bigger 12mm speaker and bass duct and ‘audio sounds deep and rich so you can enjoy music the way the artist intended’. 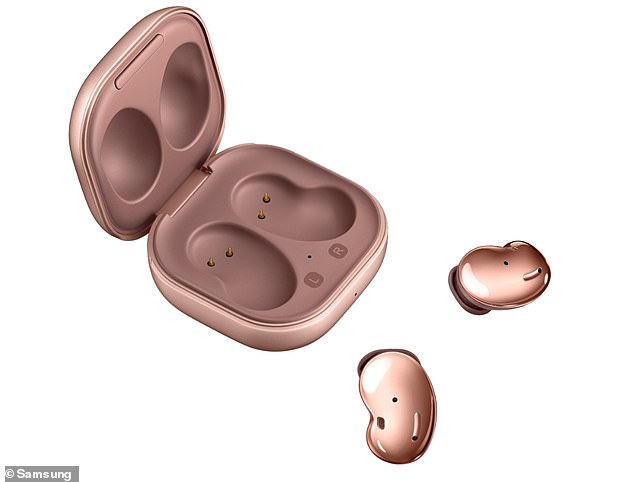 ‘Galaxy Buds Live come with three microphones and Voice Pickup Unit so you can feel like you’re in the same room as your loved ones, even when you’re apart,’ Samsung said.

‘These earbuds feature Active Noise Cancellation for open type bringing the best of both – live and spacious sound quality, with the ability for you to tune in (or out) of the world around you.’

The Galaxy Watch 3, meanwhile, is a premium smartwatch along with advanced health features, with support for the company’s expansive suite of health apps, and a slimmed-down version of the popular rotating bezel.

Samsung said it ‘features the craftsmanship of a luxury timepiece, while still being comfortable enough to wear all day and all night’.

‘Galaxy Watch 3 is a next-generation companion for managing your routines, smashing your fitness goals, and keeping track of your health,’ Samsung said. 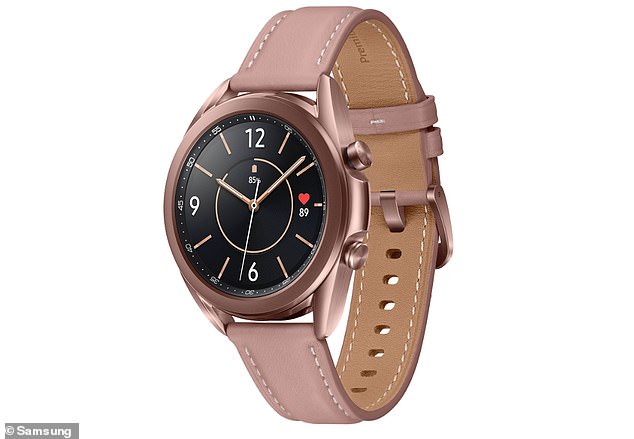 Pre-orders for the two smartphones, tablets, ear buds and smartwatch start today and will be available to purchase on the Samsung website and its retail partners from August 21.

With prices for the Note 20 Ultra 5G starting at £1,179, today’s launch marks one of ‘the most expensive handsets of recent times, said one expert.

‘Our research found that the price of top-end mobiles are five times more expensive than they were in the year 2000,’ said Ru Bhikha, mobiles expert at Uswitch.com.

‘In fact, our data suggests that high-end smartphones could cost £1,800 within five years.

‘The Note 20 and the Note 20 Ultra are bulging with all the top-end features and gizmos that users of premium handsets expect, but such technology doesn’t come cheap.’

Samsung has also announced the Galaxy Z Fold 2, which folds along a horizontal crease through its centre, although its price is yet to be revealed. 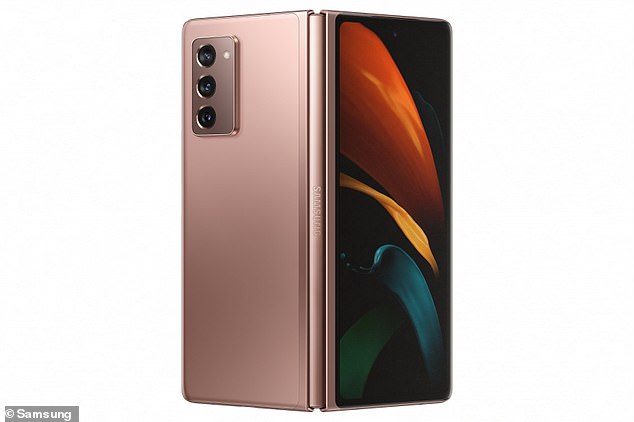 Samsung has already released two fold devices – the Galaxy Z Fold and the Galaxy Z Flip, which flips like a retro 90s phone thanks to a hinge through the screen – and the new model is redesigned based on consumer feedback.

The outer cover screen, which acts as the display when the phone is folded, is 6.2-inches, while the massive main screen when unfolded is 7.6-inches, making both larger than the original Galaxy Fold.