Samsung is once more the world’s top seller of smartphones, edging out Chinese firm Huawei, according to a report from Counterpoint Research.

The Korean tech company took the top spot in the global smartphone market in August, accounting for 22 per cent of the total market share.

Second-placed Huawei, meanwhile, took a global market share of 16 per cent in August – down from 21 per cent in April this year.

Huawei’s market share is expected to fall further in the future due to US trade sanctions, according to the researchers.

US President Donald Trump added Huawei to the Entity List in May 2019, effectively blacklisting the firm and preventing it from trading with US companies.

After achieving its highest global share of 21 per cent in April, Huawei’s market share is expected to fall further in the future due to US trade sanctions

Trump extended the US’s trade ban for another year this May – a decision Huawei called ‘arbitrary and pernicious’ and one that would damage the global technology industry.

The ban came amid ongoing allegations that the company is a threat to American national security – which Huawei has consistently denied.

‘There will be heightened marketing activity to seize opportunities in these regions and segments.

‘As a result, the concentration of top players in the smartphone market will be much stronger.

‘We see players like Samsung, Apple, Xiaomi and OPPO benefiting the most.’

US tech giant Apple was third in Counterpoint’s rankings with 12 per cent of the global smartphone market share, Chinese firm fourth Xiaomi with 11 per cent and other sellers making up the remaining 40 per cent.

Ben Wood, chief of research, CCS Insight said it was unsurprising that Samsung had pushed ahead of Huawei as 2020 progressed.

‘Its success earlier in the year was a bit of an anomaly as it was performing well in China while the global market was severely depressed due to the pandemic.

‘Huawei is facing enormous pressure as a result of the US Administration’s extensive sanctions and despite an incredible performance in China, its global position is being dramatically eroded. 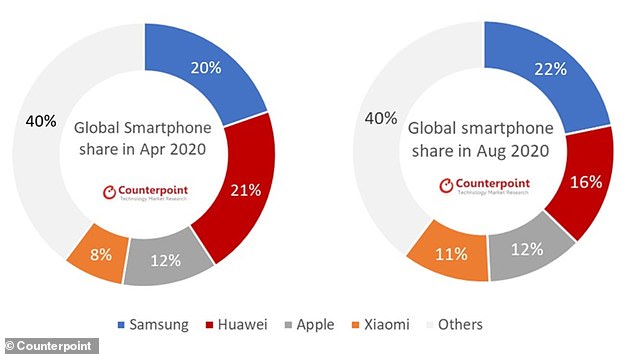 Charts show the global smartphone sales share in April (left) and August (right). After losing its crown in April, Samsung has rebuilt its market share

In April, Samsung lost the top spot to Huawei due to sharp declines in its major markets of India and Europe.

But in July and August, Samsung rebounded as India recovered from a nationwide lockdown, Counterpoint said.

Samsung – which released the Note 20 and the foldable Galaxy Z Fold 2 in August and September, respectively – benefited from anti-China sentiments in India – a key market consisting of avid smartphone fans, the researchers add.

Meanwhile, third-placed Apple, which has just launched its much-anticipated 5G-ready iPhone 12, had a global share of 12 per cent in both April and August

Counterpoint expects iPhone sales to rise notably in November, following the launch of the iPhone 12 on October 23. 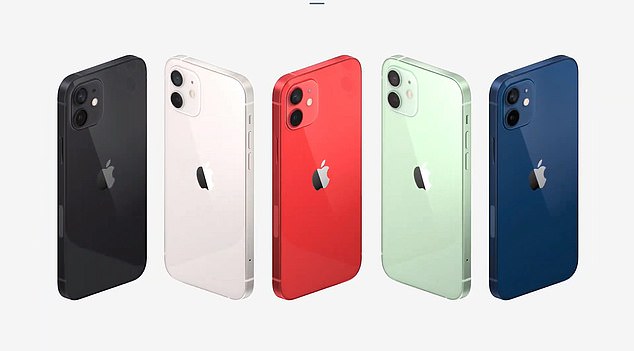 Apple unveiled the new iPhone 12 event during a live event that was watched by millions from around the world on October 13. The smartphone is designed with rounded edges that look similar to the iPad Pro and boasts 5G cellular connectivity

‘The long lifecycle of iPhone 11 series and successful new iPhone SE will help Apple bridge the gap till then’, Counterpoint said.

Chinese company Xiaomi is showing a significant increase in its market share – up from 8 per cent in April to 11 per cent in August.

It’s likely Xiaomi will fill the void in markets where Huawei used to have strong presence, such as Central Eastern Europe.

In July, it was reported that Huawei was the world’s biggest smartphone seller, displacing Samsung from the top spot in the process, from April to June this year.

The period was the first quarter in nine years that a company other than South Samsung or Apple had led the market. 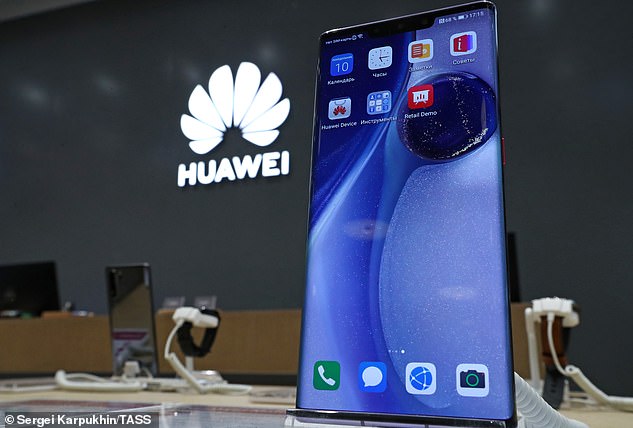 Huawei sold 72 per cent of its smartphones in mainland China from April to June, compared with 61 per cent for the January to March quarter this year.

Huawei released its Mate 30 in the UK for £899 back in February – its first smartphone made without access to Google apps due to the US ban.

It’s believed the Chinese company has since felt the heat of US sanctions that have disrupted its business overseas.

The US has effectively blocked Huawei from using Google’s services, damaging the attractiveness of the Chinese company’s phones abroad and limited its access to chips for 5G networking.

In July, the UK government revealed that Huawei equipment will be banned from the UK’s 5G networks due to security concerns.

Telcos purchasing any new Huawei 5G equipment will be prohibited in the UK after December 31 this year, and all of its hardware will be removed from the networks by 2027.

The decision will not affect Huawei smartphones – only the company’s network equipment that forms part of the country’s 5G infrastructure.

China could retaliate against America for its treatment of Huawei in a number of devastating ways – the most likely would be to targeting US companies that do business in the region, such as Apple. Greater China ranks third among the regions that generate the most revenue for the company, behind the US and Europe.

Additionally, the majority of Apple’s supply chain consists of Chinese companies that manufacture key components like sensors, OLED displays and other parts used in the iPhone.

If Apple can’t rely on Chinese manufacturers, it may be forced to move to suppliers in the US or elsewhere, which could result in an increase in iPhone prices.

Additionally, some Chinese consumers have already latched onto a growing ‘Boycott Apple’ movement in retaliation, which means Apple may suffer lasting damage to its brand in the region as a result of the Huawei ban.

Apple isn’t the only US firm that’s likely to feel an impact. Tech companies that rely on Huawei as a major will also be hurt.

‘The announced tariffs, if implemented, will be the gut punch for tech companies and its suppliers,’ said Wedbush Securities analyst Dan Ives.

What devices could be impacted by the decision?

Existing and new Huawei phones will be hurt the most when it comes to security updates.

These devices will no longer be able to access over-the-air security updates supplied by Android, as well as new software versions, like Google’s upcoming Android Q.

But Huawei devices will be forced to use the open source version of Android, which means the firm will learn of security updates the day they’re issued and, as a result, will have to ship them out to users manually.

This could leave Huawei devices vulnerable to attacks or other security flaws in the time that it takes to download new security updates.

Huawei would also be left out of future Android software updates. Since it’s using an open source version, it can’t legally market its phones as being Android devices.

The ban will most likely affect Huawei’s line of Mate laptops as well.

Huawei’s computer business relies heavily on chips made by Intel, Qualcomm and others, as well as Microsoft’s Windows operating system.

Since these companies aren’t doing business with Huawei, it’s not yet clear what this means for future laptops made by the firm.