South Korean giant Samsung plans to plough £150billion into cutting-edge technologies over the next three years.

The electronics company said it would focus investment on artificial intelligence, advanced microchips, robotics and biopharmaceuticals.

It intends to hire 40,000 people globally and wants to strengthen its standing in certain industries through mergers and acquisitions.

Investment drive: South Korean electronics giant Samsung said it will plough £150bn into cutting-edge technologies over the next three years

The spree by South Korea’s largest conglomerate was revealed days after de facto boss Jay Lee was released from jail on parole.

Lee, known as ‘the crown prince of Samsung’, has been in charge of the group since his father had a heart attack in 2014.

His family controls Samsung Electronics through shareholdings in Samsung Life Insurance and Samsung C&T Corp, both of which have holdings in the firm.

But the 53-year-old has been in and out of jail since 2017 amid allegations of bribery and corruption, which he denies. 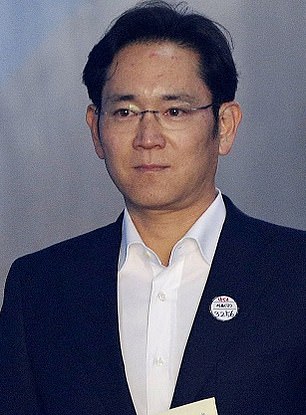 He was jailed for five years for bribing government officials with horses and cash, to win support for a merger of two subsidiaries that would strengthen his grip over the group – a scandal that brought down then South Korean president Park Geun-hye.

Lee’s sentence was reduced and suspended in 2018.

However a retrial was ordered the next year and Lee was jailed again in January 2021 until his parole due to his ‘contribution to the national economy’.

As the heir apparent at Samsung, he is seen as the only person with enough heft to push through risky investment decisions that could decide the company’s future but he is banned from employment due to embezzlement charges he faces.

That has not stopped Lee in the past two years though – he has effectively run the conglomerate without even holding a board seat.

Samsung did not spell out where its investments would fall but the proposals expand on plans first laid out in 2018.

It is aiming, in part, to maintain dominance in areas it leads in, including memory chips. ‘The chip industry is the safety plate of the Korean economy,’ Samsung said.

‘Our aggressive investment is a survival strategy in a sense that once we lose our competitiveness, it is almost impossible to make a comeback.’

Chip rivals including Taiwan Semiconductor Manufacturing and Intel are making large investments amid a global shortage and intensifying competition.

South Korea tycoons have a history of becoming embroiled in corruption or sleaze, but many have escaped severe punishment with reduced or suspended sentences.