Samsung has taken the wraps off a range of new televisions powered by AI that promise to provide pictures with greater clarity than ever.

The whopping 65″ to 85″ screens in the new QLED 900R range are capable of displaying images in 8K resolution – the next frontier in ultra high definition viewing.

8K refers to the number of horizontal pixels in a screen.

This newest resolution has four times as many pixels vertically and horizontally as current top-end 4K Ultra HD screens, and 16 times more than standard 1080p HD.

Samsung is using Artificial Intelligence (AI) to ‘upgrade’ the quality of any video content viewed on the screen, including older television shows, and movies.

The AI analyses the low-resolution content – checking the pixel location, colour, shape of 33 million pixels inside the frame – to detect objects it recognises.

When it pinpoints a shape it recognises, the AI is able to calculate where the additional pixels are needed to ‘sharpen’ the image for the higher resolution display.

Out of the box, Samsung has included somewhere in the region of 100,000 algorithms to enhance objects commonly seen in television shows and movies, with more set to be added via software updates over time.

Given the lack of native 8K content currently available on streaming services and terrestrial channels, this is likely to be an important differentiating feature.

The new 65″ to 85″ televisions will be available across the UK and Europe from mid-October, though the company has not yet revealed how much the screens will cost.

Huge televisions powered by AI to provide pictures with greater clarity than ever before have been unveiled by Samsung. The whopping 65′ to 85′ screens are capable of displaying 8K resolutions – the next frontier in ultra high definition viewing

The announcement was made during a press briefing at the annual IFA tech conference, which is held in Berlin from August 31 to September 5.

While 8K content may be yet to hit the mainstream, Samsung’s smart software promises to boost the quality of what you watch.

That includes everything from smartphone footage and regular broadcast TV to streamed boxsets – so that the next time you watch Game of Thrones, you’ll be watching in 8K.

The AI upgrades low-resolution images to the pixel-laden new format by recognising patterns in the image. To do this, the television scans and analyses the location, colour, and shape of all 33 million pixels on-screen at any one time.

When the system recognises an object, it is able to calculate where the additional pixels are needed to ‘sharpen’ the image for the higher resolution display.

Out of the box, Samsung has included somewhere in the region of 100,000 algorithms to enhance objects commonly seen in television shows and movies, with more set to be added via software updates over time.

Samsung is using also using AI to enhance the sound, using the software to strip any distortion or noise from the feed.

Elsewhere, the new TVs have an ambient mode that scans the surrounding environment and mirrors it, so that your set can become a piece of artwork blend in to your wallpaper while not in use. 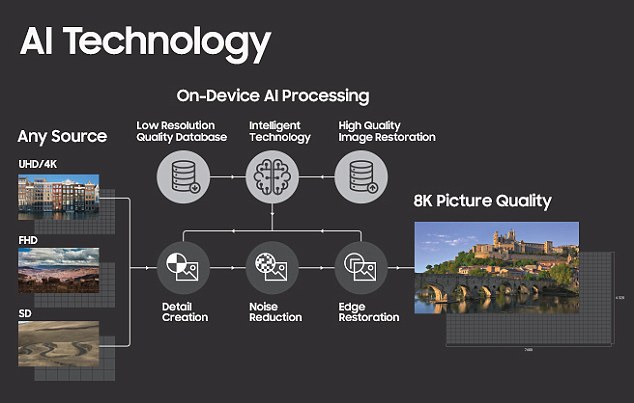 Samsung says its TV AI can boost the quality of high definition and standard definition video, boosting it to 8K quality. The AI restores low-res content by recognising patterns the image and calculating where the additional pixels are needed

‘At Samsung, we’ve worked tirelessly over the years to move the industry forward when it comes to premium picture quality, and the introduction of our QLED 8K with 8K AI Upscaling is an integral component as we look to the future of displays,’ said Jongsuk Chu, senior vice president of visual display business at Samsung.

‘We’re thrilled to introduce the Q900R to consumers and are confident that they will experience nothing short of brilliance in colour, clarity and sound on our new 8K-capable models.’

To achieve 8K-quality images, Samsung’s Q900R features up to 4,000 nit peak brightness – a standard used by most Hollywood film studios.

DO SMART TV MAKERS HAVE TO HAVE YOUR PERMISSION TO ‘SPY’ ON YOU?

An analysis from Consumer Reports has described the amount of data smart TV manufacturers – and companies that work with them – can access about you and your family.

One of the television makers evaluated in the report, Vizio, has already been in trouble because of this trend.

In 2017 the company was sued by both state and federal regulators because it had not asked for users’ permission before gathering their data.

Vizio had to shell out $1.5million (£1.1 million) to settle a case brought against it by the Federal Trade Commission. 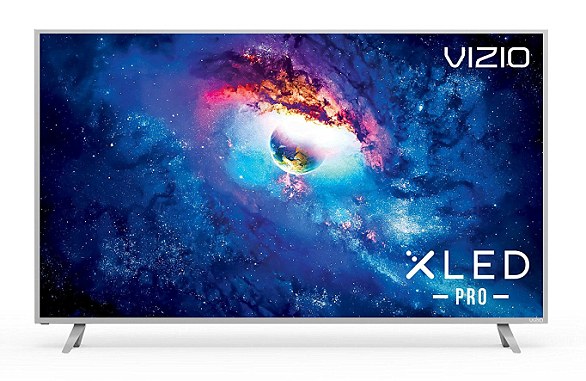 Television manufacturer Vizio has been sued for ‘spying’ on users. It had to shell out more than $2million between a federal and a state lawsuit last year (file photo)

The Federal Trade Commission has been clear about the fact that companies have to ask you before accessing your data.

The report said that all of the companies were following this Federal Trade Commission rule.

‘Every smart TV we evaluated asked for permission to collect viewing data and other kinds of information,’ the report said.

Samsung’s 8K AI Upscaling technology is powered by the system’s Quantum Processor 8K, which recognises and increases the quality of the content to appear in 8K.

These systems are designed to let enabling users to see billions of shades of colour usually hidden on lower resolution screens.

Additional features include recognising and analysing the number of connected entertainment devices, like audio devices connected via optical cable with One Remote, then auto switches the TV’s image source and audio output for an optimised viewing experience.

Lifestyle features, such as Ambient Mode, have been enhanced to seamlessly blend the TV in the surrounding space by showcasing beautiful images, weather, news and more on the screen.

Speaking at the conference, HS Kim, president and CEO of consumer electronics division at Samsung discussed the firm’s wider plans for AI.

He said: ‘Samsung is uniquely positioned to provide consumers with a full range of cutting-edge AI and IoT products and services based on our wide-ranging portfolio of TVs, displays, audio, home appliances and of course mobile devices.

‘We are striving to shape a new era of connected living, where our products and services seamlessly interact with one another to make our consumers’ lives richer, smarter and more entertaining.’