A gibbon at San Diego zoo surprised staff when she went into labor and had a baby despite being on birth control for seven years.

Eloise, a 37-year-old siamang and her 35-year-old male companion Unkie already have six children together, which is why the zoo was using chemical contraception to keep them from having more.

But on November 12 she gave birth to her seventh child in her exhibit much to the surprise of zookeepers.

Eloise, a 37-year-old siamang, surprised staff when she went into labor and had a baby despite being on birth control for seven years (pictured with her baby)

Having too many offspring would make them too dominant in the San Diego Zoo siamang population’s genetic pool.

She said she had showed no outward signs of being pregnant an staff that care for her on a daily basis didn’t notice any changes.

The zoo’s siamang population is a part of a breeding program called the Species Survival Program, which aims to restore endangered species’ populations while also guaranteeing genetic diversity.

‘We’re not certain why birth control didn’t work in this case, but as with humans, it is not uncommon for contraceptive failure to happen from time to time,’ Andrews said.

‘Still, we are overjoyed because any birth of an endangered species is a reason to celebrate’. 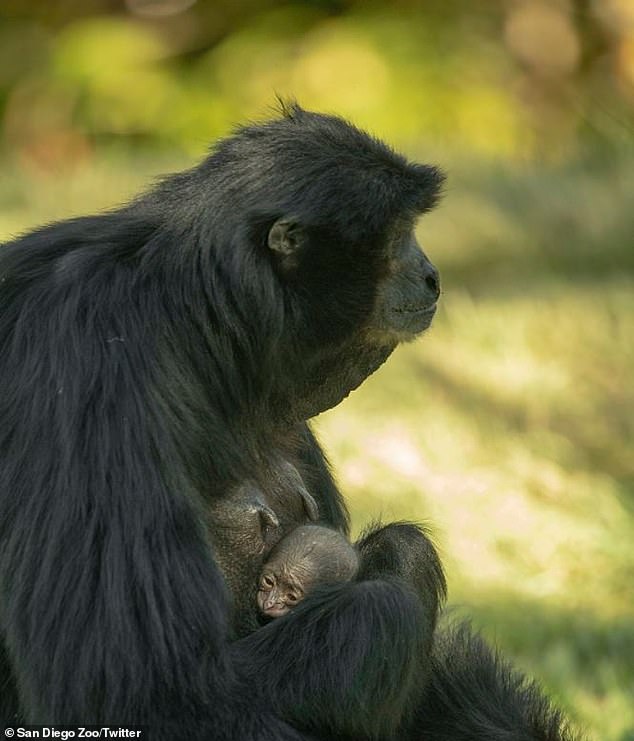 Eloise showed no outward signs of being pregnant an staff that care for her on a daily basis didn’t notice any changes. 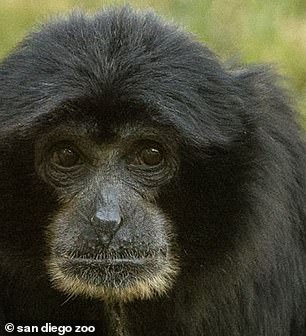 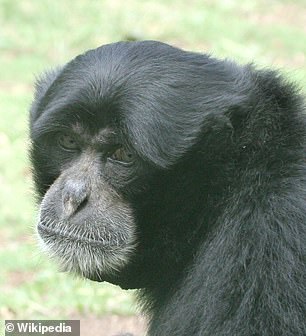 The zoo said the baby’s gender will be revealed once animal care staff are able to give it a full exam, which should happen in the coming months.

‘We’re just going to allow her to be a mama for right now’, zoo spokesman Andrew James told the San Diego Union-Tribune.

Logging and the spread of agriculture have cut into the apes’ habitat, pushing them to become endangered, according to the zoo.

Another reason their population numbers have suffered is that poachers kill adult siamangs to sell their primate children as pets.

All gibbon species are listed as endangered on the International Union for Conservation of Nature’s Red List of Threatened Species. 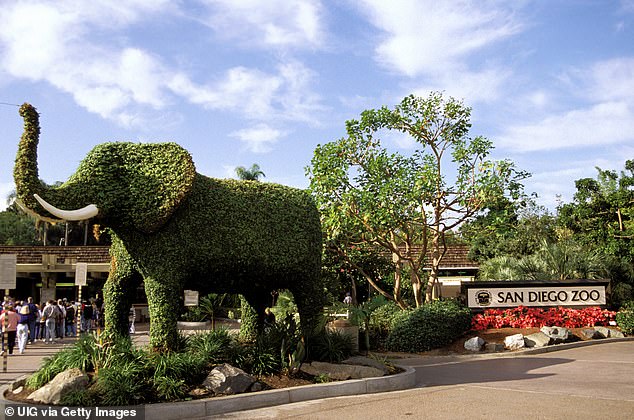 Their main threats are loss of habitat from logging and agriculture.

Siamang are sometimes killed to capture the young, who are illegally sold as pets.

Siamangs are also fierce in defense of their young so it can be extremely difficult to capture their babies without killing the mothers.

Eloise is quite old to be a mother. The lifespan of a wild siamang is about 30 years, although in captivity they can live to be over 40.

Mother and father usually stay together for life, sharing responsibility for raising their offspring.

‘They’ve been together for a long time,’ James said of Eloise and Unkie. The better option was to put her on birth control’.