San Francisco bakery serves a donut as big as a face

A San Francisco bakery sells a giant, one-pound donut that is larger than a customer’s face.

But while some people might take time to savor such a large dessert — or share it with friends — Bob’s Donuts encourages customers to eat it on their own as quickly as possible.

After one customer timed himself trying to polish off the massive dish, Bob’s instituted the Donut Challenge, in which customers are dared to finish the entire thing in three minutes or less to win a prize. 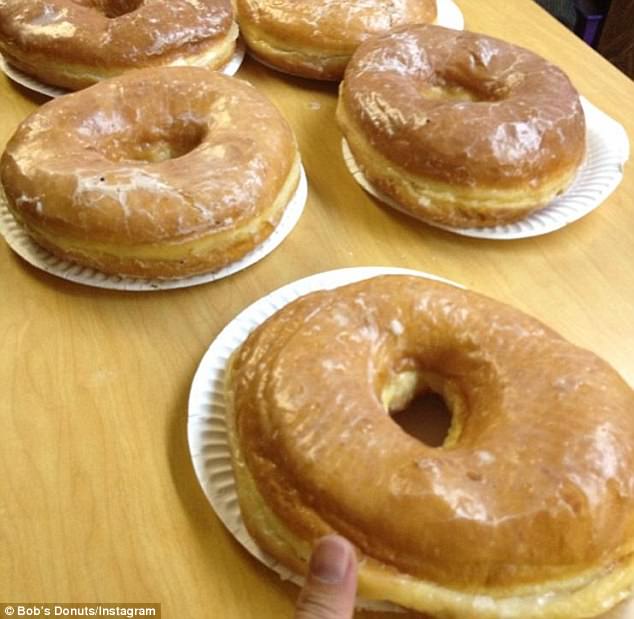 Get a prize! It challenges customers to finish the entire pastry in under three minutes

The Big Donut is larger than most customers’ faces, and comes in flavors like chocolate frosting, crumbs, sprinkles, maple, or glazed.

Though it can be ordered just to eat normally like everything else on the menu, ambitious eaters can try their hands (and mouth) at the challenge.

There is only one rule, which is to ‘eat one donut within three minutes, it’s as simple as that’.

Roko Smiljanic III, donut chef at the bakery, told Thrillist, ‘Originally, the Donut Challenge didn’t start off as a challenge. 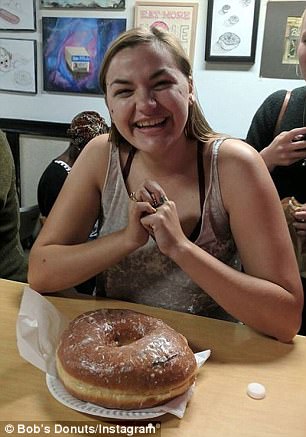 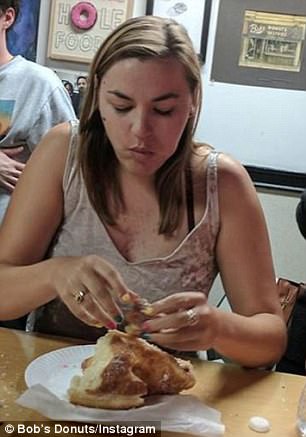 Before and after: One brave customer, Anne Marie Bonino-Britsch, tried the donut challenge but sadly failed as she couldn’t finish it in time

‘People ordered The Big Donut and one day some guy started to time himself. Eventually we started timing other people eating the donut,’ he said. ‘We just took those times, and put them up on the wall of fame. It’s been a Bob’s staple ever since.

The clock starts as soon as the donut is touched, and it stops when ‘the donut is behind your teeth’ and you can give Smiljanic a big smile, showing that there are absolutely no donut remnants in your mouth.

If it is finished in under three minutes, the customer takes home a T-shirt and gets his or her name in the Hall of Fame. 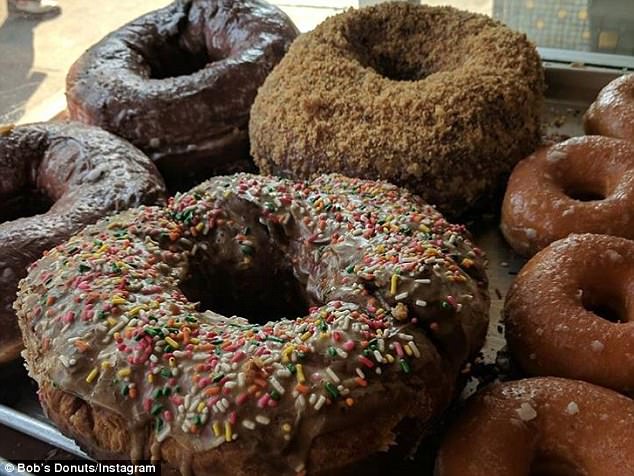 Classic: Roko Smiljanic III, the chef at the bakery, said that the challenge was created because one man starting timing himself eating their big dougnut 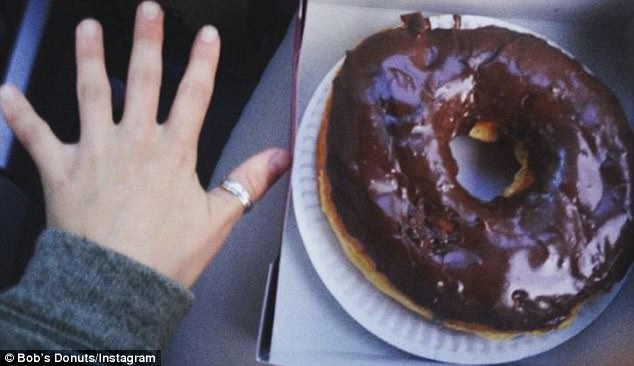 Choices: For the challenge, customers have a choice of traditional toppings to choose from such as chocolate frosting, crumbs, sprinkles, maple, and glazed 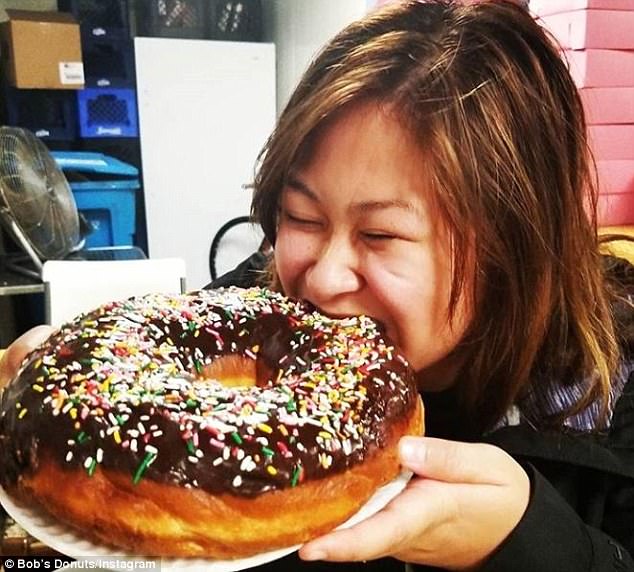 Timer: The clock starts as soon as the donut is touched and stops when the customer proves there’s no donut left in his or her mouth – by smiling at the chef

If it’s finished in two minutes, the customers get the $10.95 price of the donut refunded, as well as a free drink, a Bob’s Donuts T-Shirt, his or her name in the Hall of Fame.

Bob’s certainly sells the challenge in a big way, writing online: ‘The Big Kahuna, the Belly Buster, the Scale Breaker, whatever you want to call it, it’s the BIG ONE.

‘This bad boy is what our Challenge contenders are faced against and it’s always ready for battle.’

Aside from the huge donut, the famous bakery also serves up other classics such as regular sized donuts and donut bars, which you can get dipped in sweet maple or in classic chocolate.