‘Taboo-busting’ film for Bodyform sanitary towels featuring women having hot flushes, writhing on the floor in agony with endometriosis and losing a baby late in pregnancy is hailed as ‘the most relatable ad ever’

Sanitary towel brand Bodyform has been praised for ‘breaking taboos’ about women’s experiences in a ‘refreshing and emotional’ new advert about the female body.

The brand, which was the first to release an advert showing red blood on a sanitary towel, has launched its latest campaign #WombStories – which aims to explore unheard accounts of women’s health issues.

Directed by Nisha Ganatra, the film weaves in animation that depicts period pain like a raging monster with teeth, and depicts issues surrounding reproductive health that are typically not dealt with in adveritising, including miscarriage, endometriosis, fertility and menopause.

The advert has been praised on social media by viewers who said it’s the ‘most relatable ad’ they’d ever seen, while others called the three minute advert ‘brilliant and emotional’.

One Twitter user commented: ‘This is incredible! So refreshing to see periods being presented as an issue that doesn’t have to be overcome or hidden away.

‘This presents women’s bodily functions in a relatable way- which is the way forward to start breaking those taboos. Thank you so much.’

Another added: ‘This is literally the most relatable ad about being a woman I have ever seen. Everyone can relate to this. Bravo’.

A third agreed, writing: ‘Brilliant piece about what is probably the most brilliant, emotional, relatable piece of advertising I’ve seen this year.

The advert has been praised on social media by users who have called the film the ‘most relatable ad’ they’d ever seen, while another called the three minute advert ‘brilliant and emotional’

‘And to think three years ago we were still being shown mysterious blue liquid not blood on sanitary towel adverts.’

The advert sees a woman with endometriosis doubled over with pain in her bathroom as well as the story of a couple who have a miscarriage late into their pregnancy.

Meanwhile, in another shot, a group of menopausal women can be seen having hot flushes.

Equally, the film is full of lighter moments, including a woman who is glad to get her period as it means she isn’t pregnant, and another discovering new underwear has been ruined by period blood.

The UK and Ireland consumer marketing director at Bodyform, Nicola Coronado, said the aim of the new film is to represent stories which have gone ‘ignored, overlooked or denied’.

‘With #WombStories we are starting a movement’, she said, ‘We want to boldly go where no other brand has been before; inside women’s bodies and emotions to truly represent their sensations and feelings that we believe are not only invisible but ignored, overlooked or denied.

She added: ‘#WombStories reveals the narrative inside and out and we hope to put these topics on the table for all to talk about.

‘We believe that only once we understand women’s bodies and everything they go through; can we care for them with our period and daily intimate care products.’

Bodyform is the same brand that released an advert featuring blood on a sanitary towel for the first time and the first sanitary towel brand in the UK to feature red blood in one of their adverts last year, rather than the blue liquid traditionally used. 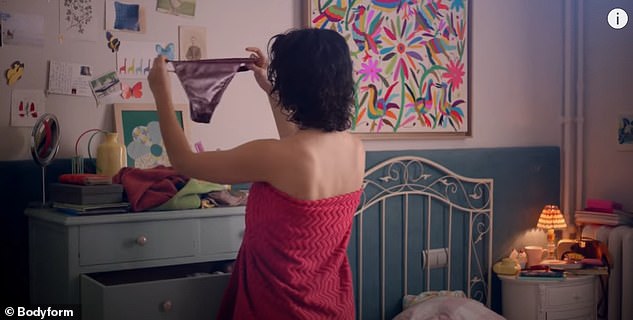 Bodyform is the same brand that released an advert featuring blood on a sanitary towel for the first time. The film also shows group of menopausal women having hot flushes

The commercial, released in 2017,  began with a vial of blood being poured onto the sanitary towel to show its ‘ultra-absorbing core.’

It features blood streaming down a woman’s arm while she is in the shower, as well as various depictions of sanitary towels – including a lilo that is shaped like one.

The campaign aims to break the taboo over periods, with the advert accompanied by the tag line: ‘Periods are normal. Showing them should be too.’