Christian ‘Riley’ Garcia, 15, is being hailed a hero for barricading the art classroom door to protect his peers in the Santa Fe High School shooting Friday

A 15-year-old student killed in the Santa Fe High School shooting is being hailed a hero for saving his peers as the gunman terrorized the school.

Christian ‘Riley’ Garcia, 15, barricaded the art classroom before he was fatally shot on Friday.

Garcia’s friend Jai Gillard said she saw him lean against the door to block the gunman from entering, according to the Associated Press.

She added she saw him pick up two peers off the ground before she fled.

Garcia’s family pastor Keenan Smith said the teenager held the door shut to give his peers time to escape through the back door.

‘He was trying to protect some other kids that were in there, some of them lost their life also,’ Smith said to KHOU.

Gunman Dimitrios Pagourtzis, 17, eventually shot through the door, killing Garcia and the two he tried to assist, in his rampage. 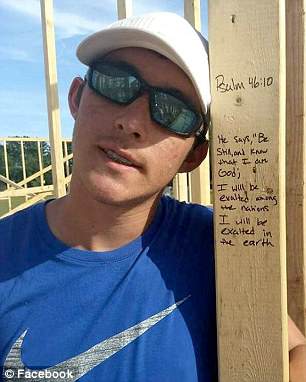 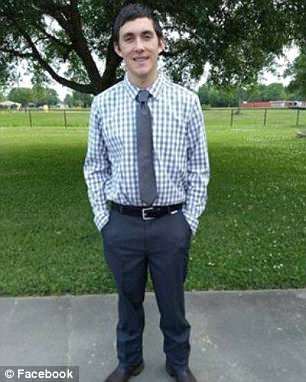 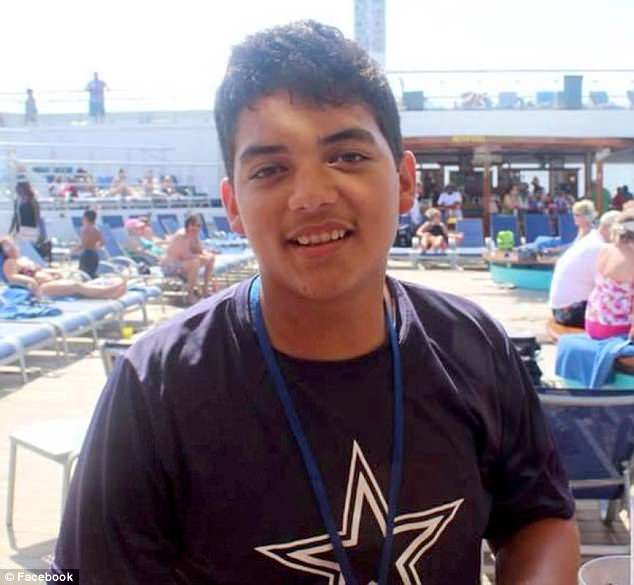 Victim Christopher Stone, 17, is also being hailed a hero as his sister revealed he tried to hold the door of a closet that he was hiding in with several students closed, before he was shot

‘The perpetrator shot through the door and killed him and killed a couple of the other students while yet a couple of them did escape out a back corridor somehow because he held the door long enough that gave them some time,’ Smith added.

‘Riley was, he was a good kid. He was one of the good ones,’ Smith said.

‘Always very respectful to everybody. Always willing to pitching in and help,’ he added.

Although Pagourtzis targeted some of his victims the pastor says Garcia was never a bully and even wanted to serve in the army.

‘The narrative has been out some about bullying and those types of things. Riley was not a bully. He was a good kid, he was compassionate, he was loving, caring and caring for other people, to the point that he desired to serve in the military when he was of age,’ he added.

Another victim, 17-year-old Christopher Stone, is also being hailed a hero.

His sister Angelica Stone revealed he tried to hold the door of a closet where he was hiding with other students closed, before he was shot and killed.

‘We were told by a student that was with him, that Chris was trying to escape the room. Didn’t succeed. But he did go into a closet with other kids and he was the one to help hold the door closed. And he did shoot the door and it hit my brother,’ Stone said to CBS. 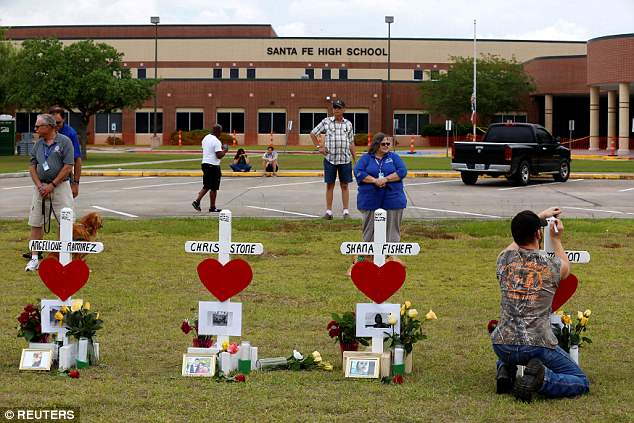 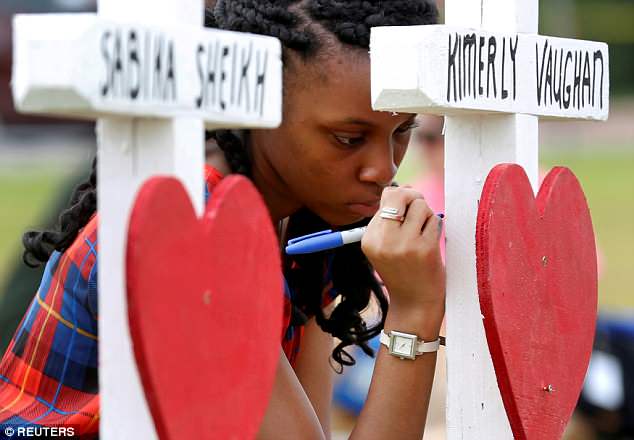 Each cross had held a name of the eight student and two teacher victims of the shooting as family, friends, and students wrote messages on wooden memorials 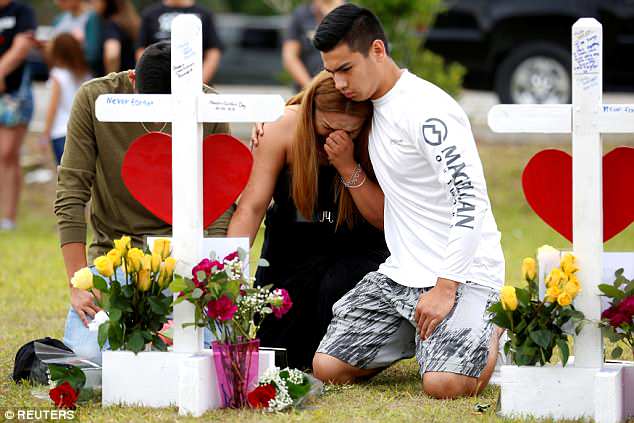 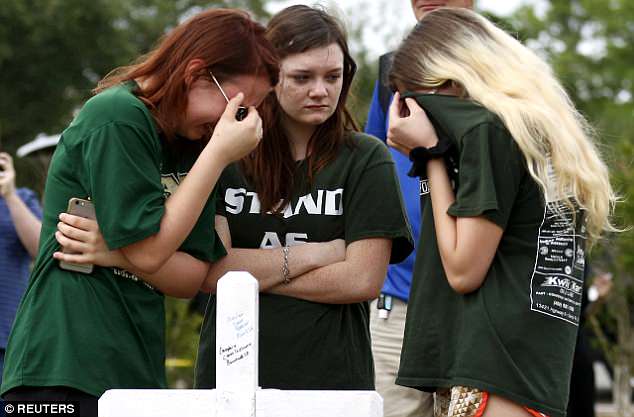 Mourners gathered at the makeshift memorial Monday morning, three days after the shooting 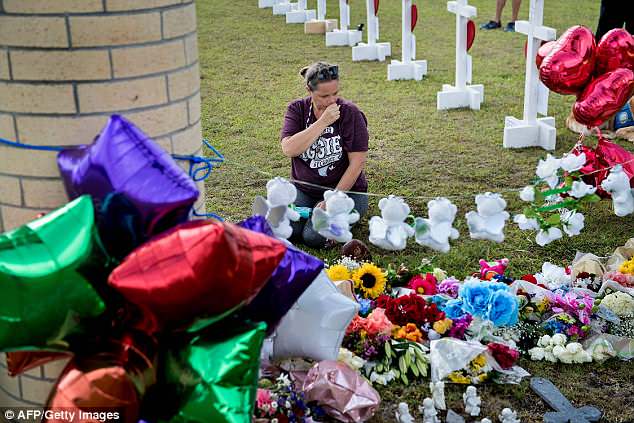 A myriad of flowers, balloons, and a garland make a makeshift memorial where mourners paid their respects to the 10 victims of the Friday shooting 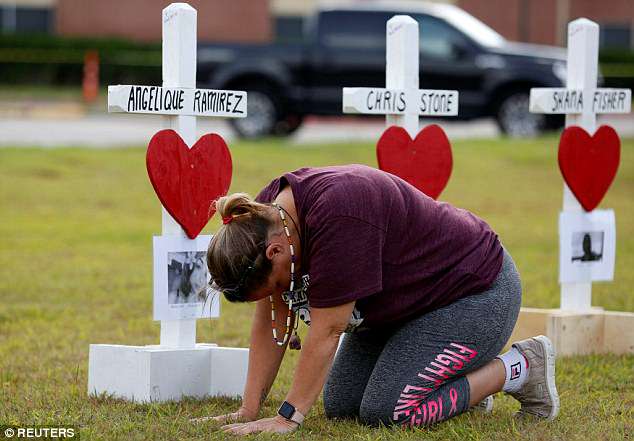 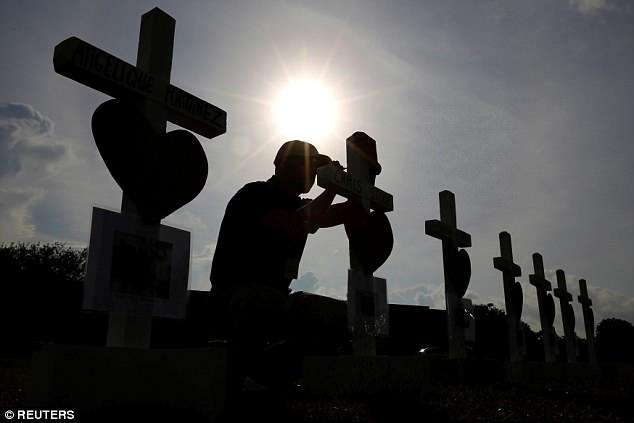 ‘Many kids are saying that if it weren’t for Chris, the other kids in the room probably would have been dead as well,’ she added on her football player brother.

Pagourtzis, a junior at the school, killed 10 people in the brutal shooting where he allegedly burst into the art classroom, brandished his father’s shotgun and pistol, then opened fire.

Thirteen people were also injured in the shooting.

Gillard said she still hears the bullets and remembers the ‘fear on people’s faces’ in the horrifying shooting that has shaken the nation.

Pagourtzis has been charged with capital murder in the school shooting and was denied bond at a hearing on Friday.

On Monday, 10 white wooded crosses were placed in front of the school as a makeshift memorial.

Students placed photos and flowers at the memorial and wrote messages on the crosses.

Family, friends and students gathered outside the school on Monday for a moment of silence as well to honor the victims of the attack. 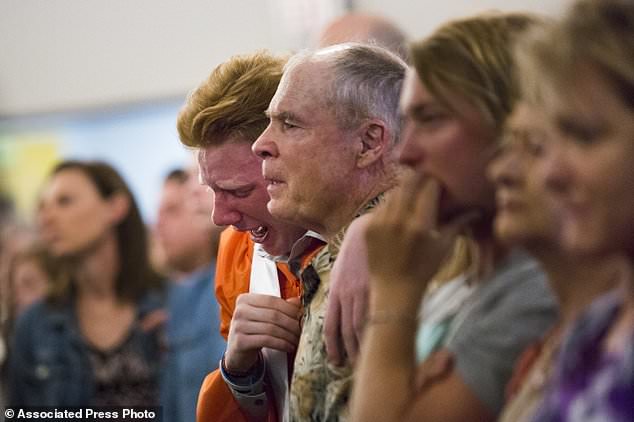 On Sunday mourners gathered for a church service at Arcadia First Baptist Church, down the road from the school. Senior Nathan Jordan, 18, pictured sobbing at the service 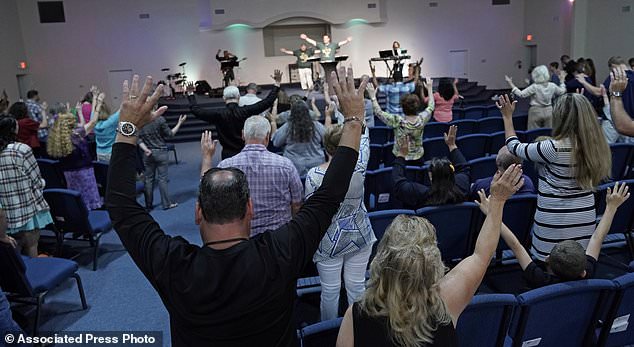 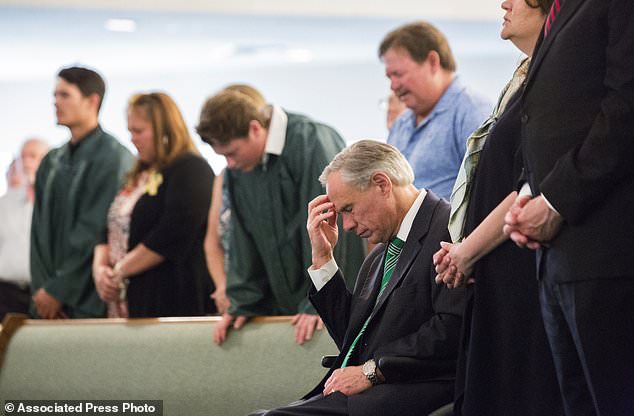 The Texas Gov. Greg Abbott joined the congregation in prayer on Sunday in wake of the attack 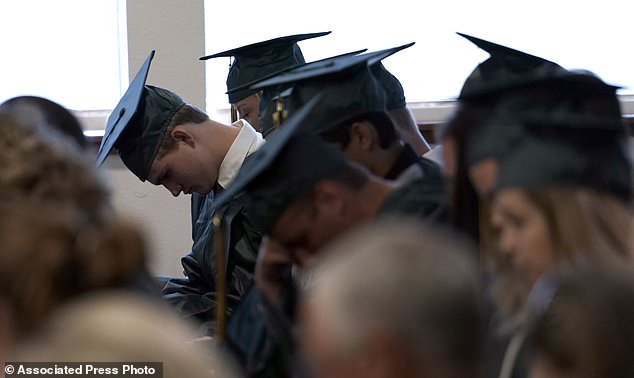 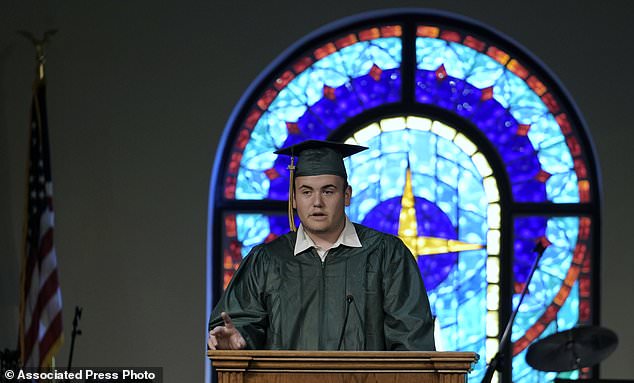 The school has been closed in wake of the shooting.

In Texas a statewide moment of silence took place at 10am on Monday, as per Governor Greg Abbott’s request to remember the 10 victims of the high school shooting and to honor the families of the victims and first responders as well.

In a statement Sunday he said that the ‘act of evil’ has ‘deeply touched the core of who we are as Texas’.

On Sunday a church service was held down the road from Santa Fe High School at Arcadia First Baptist Church to honor the lives lost.

Just 35 miles away, the first funeral service for one of the school shooting’s victims was held in Stafford at the Brand Lane Islamic Center for Sabika Sheikh, 17, the Pakistani exchange student who was killed in the tragic shooting.

Sheikh was a part of the Youth Exchange and Study (YES) program funded by the US State Department, which provides scholarships for students from Muslim countries to spend an academic year in the US.

Her body is to be returned to her family in Karachi, Pakistan. 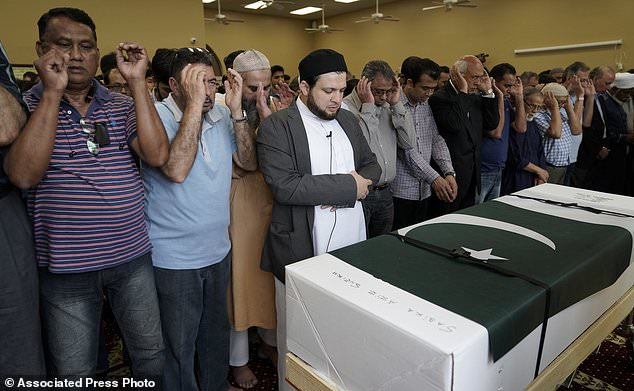 Funeral prayers are offered for Pakistani exchange student Sabika Sheikh, who was killed in the Santa Fe High School shooting, during a service on Sunday 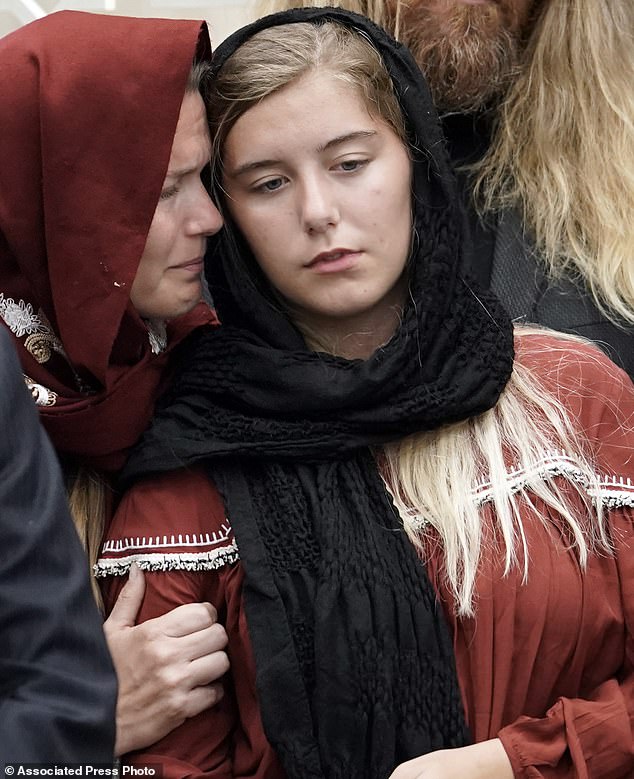 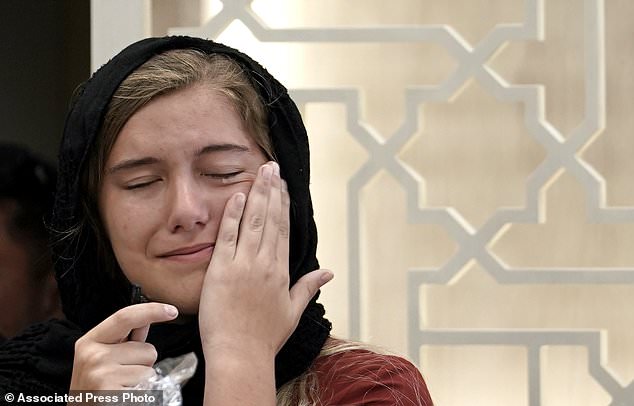 Cogburn wipes away tears as she speaks on Sheikh, who was a Pakistani exchange student who lived with her family 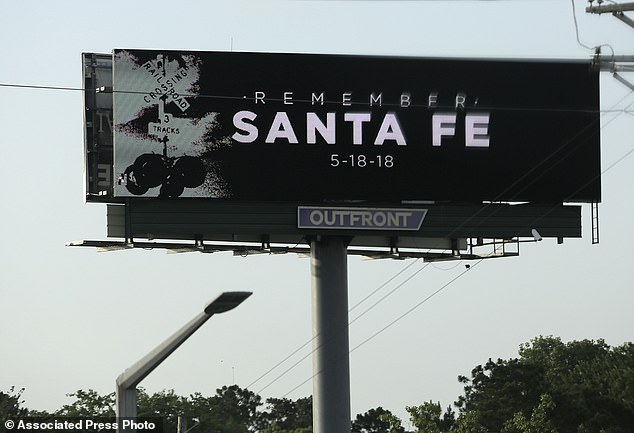 A billboard is seen off of I-45 near Santa Fe, Texas, bears the message ‘Remember Santa Fe’ 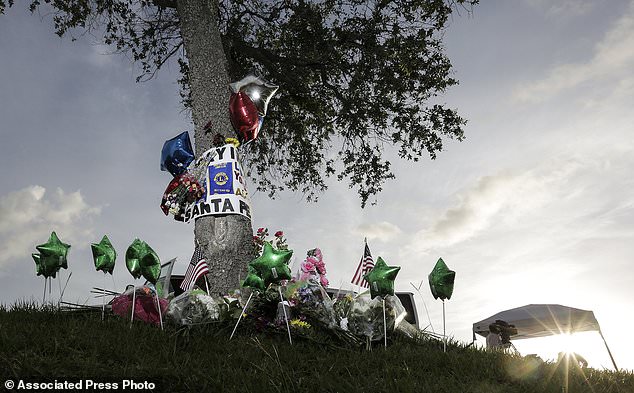 A tree is turned into a makeshift memorial with signs, balloons and flowers to remember the shooting victims