PHILADELPHIA (AP) – Carlos Santana hit a grand slam and Jose Bautista had the go-ahead RBI single in the seventh inning to lead the Philadelphia Phillies to an 8-6 victory over the Washington Nationals on Wednesday night.

Roman Quinn tripled and had three hits for the Phillies, who entered 4 1/2 games behind the Braves in the NL East. Philadelphia avoided a three-game sweep while winning for just the third time in the last 11 games.

Bautista, acquired from the New York Mets a day earlier, made a winner of Seranthony Dominguez (2-5) when his two-out, opposite-field single off Jimmy Cordero (1-1) scored Cesar Hernandez to snap a 6-all tie. Dominguez pitched a scoreless seventh.

The Phillies escaped a jam in the eighth. Wilmer Difo led off with a single off Pat Neshek and Bryce Harper, pinch-hitting after not starting due to sickness, walked against Luis Avilan. Manager Gabe Kapler brought on Hunter, the eighth Phillies pitcher and third in the inning, with runners on first and second and no outs. Hunter got pinch-hitter Mark Reynolds to fly out before Adam Eaton grounded into an inning-ending double play.

Rhys Hoskins’ two-out RBI double in the bottom of the eighth gave the Phillies a two-run cushion.

More shoddy defense helped the Nationals tie the game in the sixth. Difo singled, went to second on a passed ball by Wilson Ramos and scored on pinch-hitter Andrew Stevenson’s one-out single to right. It was the 58th unearned run of the season against the Phillies, who have been plagued by mistakes all season – and especially during their slump.

Philadelphia entered tied with the Cardinals with a major-league worst 102 errors, two of which came in Tuesday’s 5-4 loss to Washington. That game ended when pitcher Vince Velasquez, pinch-running in the ninth, was called out for leaving second base too early while trying to tag up on a fly ball to center.

Santana’s two-out drive to center in the fifth put Philadelphia on top 6-5. It was his third career grand slam and first since Sept. 18, 2015.

The Nationals, after giving up a pair of runs in the second, scored five straight to take a three-run lead. Soto hit a two-run homer to left as part of Washington’s four-run third inning for his 16th of the season, and the 19-year-old tied Hall of Famer Ken Griffey Jr. for fifth all-time for home runs by a teenager.

Phillies starter Jake Arrieta was lifted after just three innings, matching his shortest outing of the season, after giving up four runs and four hits on 75 pitches.

Nationals: RHP Jeremy Hellickson (wrist), who has been sidelined since Aug. 16, threw 30 pitches in the bullpen on Wednesday. Hellickson could expand his bullpen session on Saturday if he doesn’t experience discomfort from Wednesday’s session. 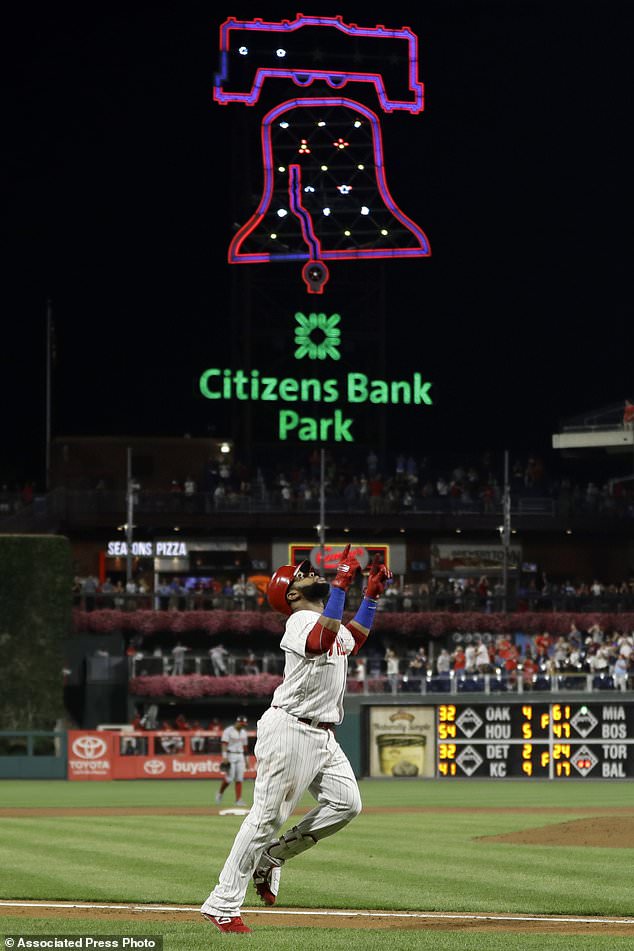 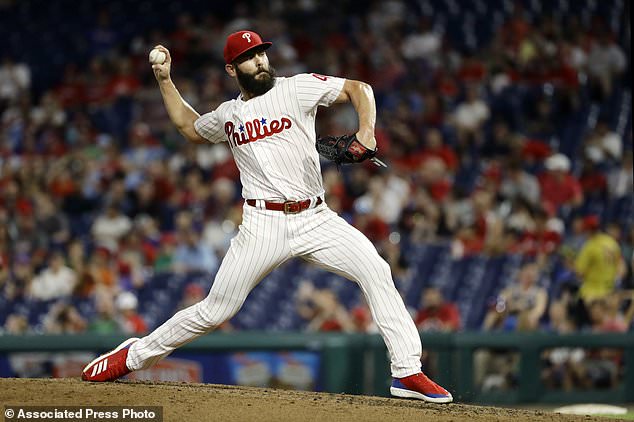 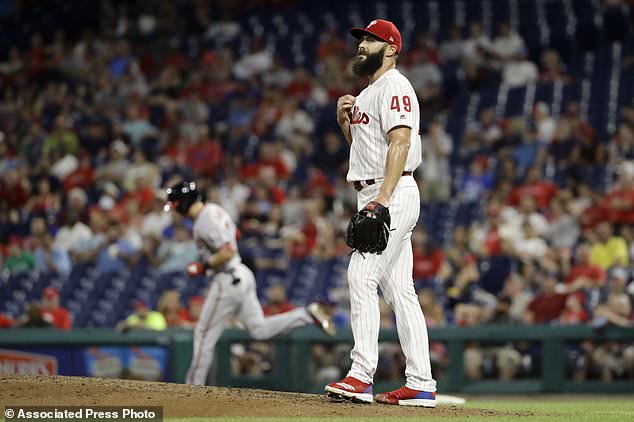 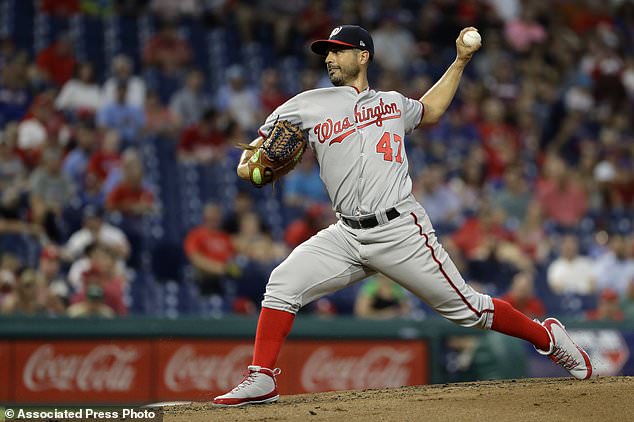 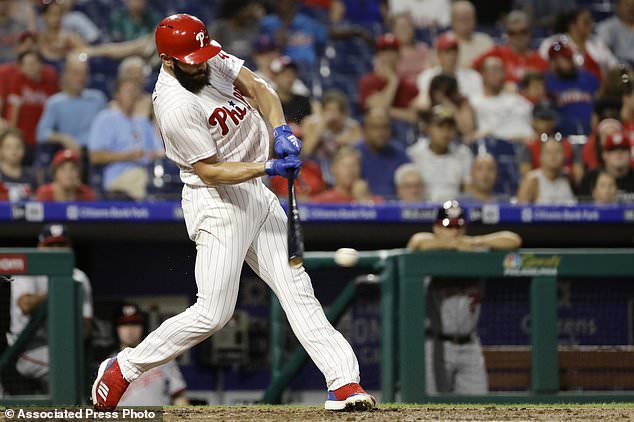 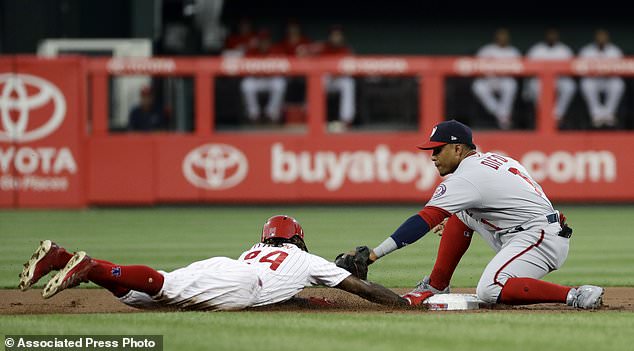 Philadelphia Phillies’ Roman Quinn, left, dives safely back to second base under the tag from Washington Nationals shortstop Wilmer Difo on a pickoff attempt during the first inning of a baseball game, Wednesday, Aug. 29, 2018, in Philadelphia. (AP Photo/Matt Slocum) 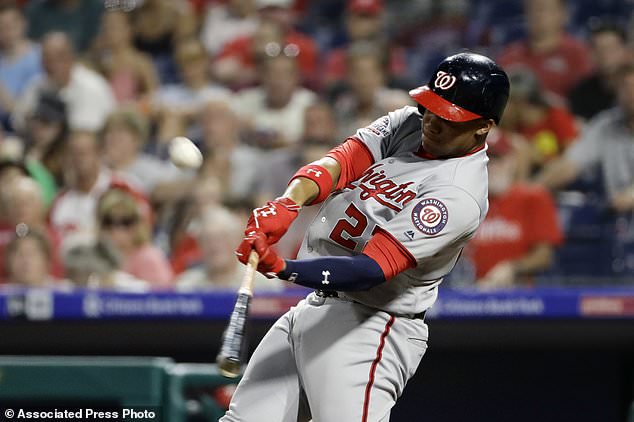