The eSaver Limited Edition deal paid 2.75 per cent on balances up to £250,000 – a deal which was a table-topper in the independent This is Money best buy savings tables.

Having only launched the deal six days before, the banking giant initially said the rate would be available until 1 November, unless sold out.

It has replaced it today with a new issue paying a lower rate of 2 per cent.

It said the deal was withdrawn following unprecedented demand from new and existing customers.

It added that any applications received by 23:59 last night will receive the 2.75 per cent rate once opened. Applications will then be processed over the following days.

Savings experts are downplaying any suggestion of Santander’s withdrawal being a turning point in the savings market.

A spokesperson for the Savings Guru said: ‘The withdrawal of the Santander product tonight is not a surprise – it was great while it lasted but we expect Santander were seeing £150million to £200million of new applications per day and even big banks can’t cope with that for too long.

‘However, Skipton’s move up to 2.55 per cent is a good sign that the market will consolidate around 2.25 per cent to 2.5 per cent on easy access and we expect this to go higher in the run up to the base rate decision on 3 November.

‘With a 1 per cent rise predicted, we could see easy access rates push past 3 per cent by the year end.’

Santander’s rate cut still caps off a strange Monday in the savings market, which saw a number of the top rates withdrawn.

Yesterday, Allica Bank withdrew the its market leading one-year deal, which was paying 4.5 per cent.

Meanwhile SmartSave bank withdrew its 5.01 per cent five-year rate, with the deal having only been available since Friday, suggesting that savers are even keen on fixing for that long. 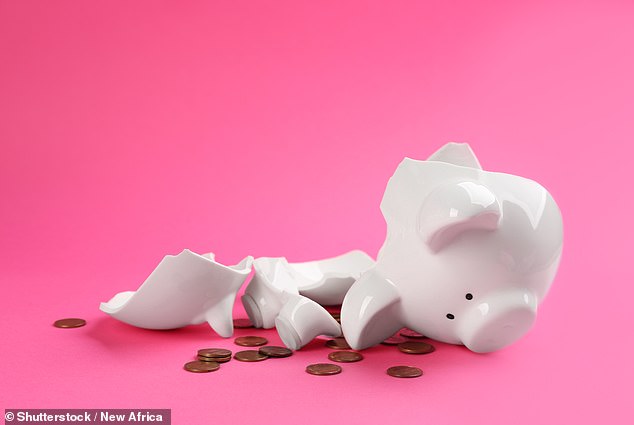 At lunchtime yesterday, Leeds Building Society announced it was increasing the rates available across its fixed rate cash Isa products.

However, barely more than an hour later, it contacted This is Money to state that the rate increases had already been ‘paused/cancelled’ and that it would update us with new rates once they have been agreed.

On Wednesday, Coventry launched three market-leading fixed bonds available to new and existing members paying up to 4.85 per cent.

However by 3pm on Friday they had all been withdrawn.

The mutual, which is Britain’s second biggest Building society is not typically the sort of savings provider to launch and withdraw rates so quickly.

The spokesperson for the Savings Guru added: ‘It is unusual to see such a big player pull a rate less than three days after launching.

‘We think they may have underestimated just how much interest they’d get, as it’s a while since they were last near the top of the best buys.

‘We also think they may have been mindful about being so competitive over a weekend, given it’s not long since their IT issues, and they may have played safe and pulled them to avoid any issues with large volumes out of office hours.

‘It may be that we see them come back in with slightly less competitive rates again later this week.’

In terms of the other fixed rate withdrawals made by smaller providers, savers are being advised to consider this as more a case of a few providers re-pricing than the beginnings of a full blown market correction.

The spokesperson for the Savings Guru added: ‘We don’t think the fixed rate changes today are a turning point for the savings market but more likely misprices being corrected.

‘The pricing moves made by Allica and Cynergy on Friday were likely agreed before they knew about Coventry Building Society withdrawing and that’s why they’ve been pulled so quickly today.

‘Both are small providers – Cynergy around £2billion of savings and Allica £1bn and they simply can’t cope with the tens of millions of pounds of applications they will have seen.’

However, Anna Bowes, co-founder of Savings Champion believes there is a possibility that yesterday’s savings activity is linked to the Government U-turns announced earlier by the Chancellor.

‘As there was a significant surge in the best rates on offer – in particular the shorter term fixed rate bonds – following the mini budget on 23 September, I’m not surprised that in the immediate aftermath of these latest U-turns, that some of the best rates have been withdrawn, perhaps waiting until the dust settles a little.

‘If the markets predict that the Bank of England will no longer need to raise rates as far as was previously thought, perhaps we’ve seen the peak, at least for now. Of course, who knows what’s round the next corner though.’