A campaign is being launched to urge tourists to stop riding donkeys up steps on a Greek island.

For decades, donkeys of Santorini have made four or five return journeys up 520 wide, cobbled steps on the cliff-side path that leads to the town of Fira.

The plight of the donkeys, which are marched from fields at dawn in temperatures  regularly more than 86F, has been labelled  ‘Santorini’s grubby little secret’.

In recent years there has been an increase in donkeys suffering spinal injuries, saddle sores and exhaustion.

For decades, donkeys of Santorini have made four or five return journeys up 520 wide, cobbled steps on the switchback path that leads to the town of Fira

Now, activists in collaboration with the cruise-line industry, have set up the initiative in Santorini to inform holiday makers about the stress put on the animals.

Nikos Zorzos, the island’s mayor, told The Guadian: ‘The campaign is about to start’.

‘Representatives from the cruise liner association were here in my office this week promising to raise awareness [of the problem] and from our side we’ll be distributing information leaflets. Our mules and donkeys are part of our tradition. Younger owners, especially, have understood that they need to be looked after.’

The animals have long been used to ferry people from the Santorini’s port to its main settlement. 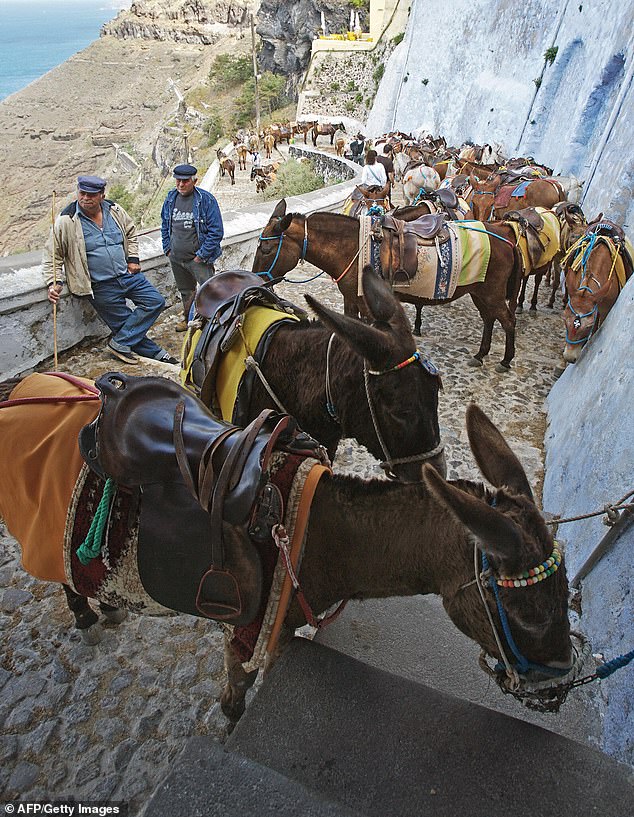 When the five-cabin cable car was introduced on the island, donkeys were used less frequently by travellers ascending the steps.

But when the volcanic isle became a popular tourist hot-spot, attracting up to 17,000 holiday makers each day from cruise-ships, demand for the donkey rides increased.

The animals who walk up in lines of two to ten, offload at a ‘donkey station’ just before the summit of the steps and then return for their next load, often bumping into walkers or squeezing them into walls that look over steep drops.

Santorini, which stretches to 77 square kilometres and has a population of 25,000, has grown in popularity to the point where Mayor Nikolos Zorzos has limited the number of cruise ship passengers that can disembark to 8,000 a day from a peak of 18,000 in 2016 because of over-crowding.

More than 108,000 people signed an online petition last summer deploring what it described as the ‘mindless and unnecessary torture [of equines]’ used by tourists to ride the steps.

There was further anger when pictures were posted on social media of the overweight tourists riding donkeys up the steps.

In response the Greek government introduced legislation making it illegal to burden animals with ‘any load exceeding 100kg (15st), or one-fifth of [their] body weight.’ 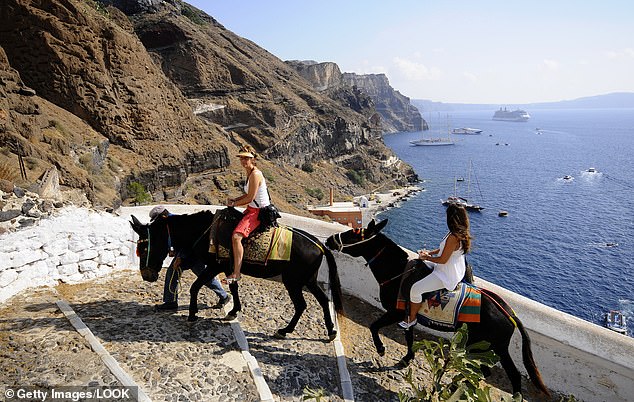 Activists in collaboration with the cruise-line industry, have set up the initiative in Santorini to inform holiday makers about the stress placed on animals

The Our In Their Hooves campaign was then launched to try and make holiday makers aware of the donkey’s suffering.

‘Our In Their Hooves campaign aims to encourage tourists to stop and think before using donkey taxis to climb the steep steps at Fira port,’ said Catherine Rice, PR officer at The Donkey Sanctuary, which launched the initiative.

Cruise liner firms signed up to the campaign after receiving complaints from passengers after the treatment of donkeys.

As part of the campaign cruise liners will be screening an animated video created by the British animal welfare charity on board ships.

‘Asking our guests to put themselves ‘In their Hooves’ is an important part of our destination sustainability plan for the island,’ said

Maria Deligianni, who represents the eastern Mediterranean for the Cruise Lines International Association, said  ‘asking passengers to put themselves ‘In their Hooves’ is ‘an important part of the destination sustainability plan for the island’.

Santorini has turned its donkeys into a money-spinning feature. Soft toys, t-shirts and trinkets bearing donkey motifs are sold in gift shops at the top of the steps and around the main town of Fira, the island’s capital. The island brews signature yellow and red donkey beers and donkey riding tours are marketed in travel agencies.

But there has been growing animal welfare concerns and in 2017 German tourist Susan Chopin was trampled to death after one of the donkeys bolted and charged into tourists who were walking up the steps. The 67-year-old, who was on a cruise with her husband and another couple, had just celebrated her birthday.