Sao Paulo hospitals are ‘near collapse’ due to coronavirus, mayor warns

The mayor of Sao Paulo has warned that the city’s health service is on the verge of collapse due to coronavirus.

Bruno Covas, who is leading the response in Brazil’s most-populous city, said ICUs are already 90 per cent full and will reach capacity within two weeks.

He pleaded with people to start obeying lockdown measures that were brought in two months ago, but have been largely ignored amid a lack of enforcement.

Intensive care units in Sao Paulo are 90 per cent full and will hit capacity within two weeks, the mayor warned as he begged people to follow social distancing rules (pictured, freshly-dug graves at the city’s largest cemetery) 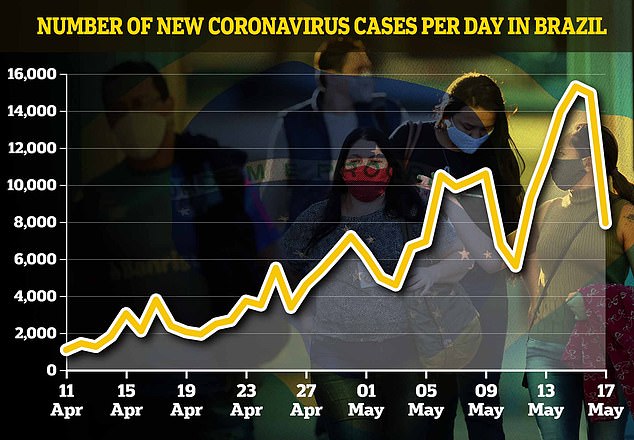 A graph showing the number of coronavirus cases reported each day in Brazil, which has been steadily increasing over the past month. The country now has the fourth-highest overall total of any country in the world at 241,080

It comes as Brazil leap-frogged Italy and Spain to record the fourth-highest number of coronavirus infections in the world.

The only countries with higher totals are the UK, Russia and America, which has confirmed almost 1.5million cases and 89,567 deaths.

In Sao Paulo, which is one of Brazil’s worst-hit cities, there have been a total of 38,605 confirmed cases and 135,381 suspected cases.

As of Sunday, the city had also recorded 4,688 deaths from the virus.

In March, Covas closed offices, public places and schools, with people told to stay at home and wear masks if they had to go out to slow the spread of the virus.

But the measures were not attached to large financial penalties of the kind seen elsewhere and were largely ignored, the BBC reported.

In an attempt to force people into their houses, cars were banned from city roads on May 11 – with Covas saying the move stopped 1.27million vehicle journeys per day.

Still, it is estimated that only 48 per cent of the city are currently isolating compared with a target of 70 per cent. 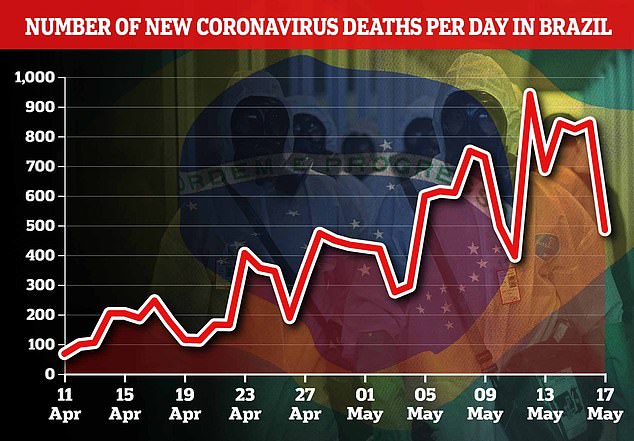 A graph showing the number of coronavirus deaths reported each day in Brazil, which has been steadily rising. The country now has a total of 16,118 deaths 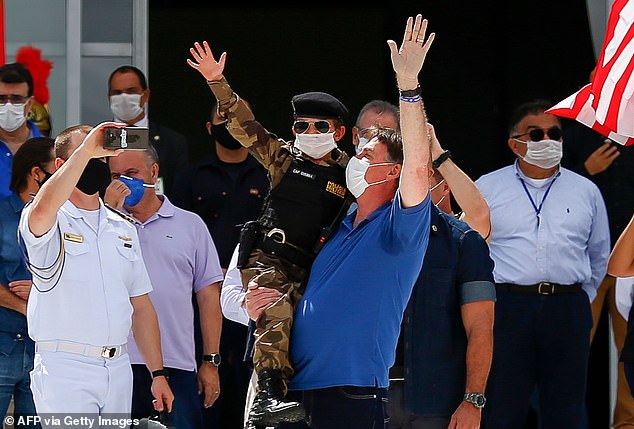 Far-right leader Jair Bolsonaro (centre) has faced criticism both at home and abroad for urging ministers to keep the economy open, despite risks from the virus

Mr Covas said he is now in talks with the state governor, who controls the police force, to bring in stricter measures.

Without bringing in additional measures, he said there is little hope of being able to provide everyone with care.

Despite nine out of ten patients being discharged and hospitals adding beds as quickly as possible, because the rate of infection is still increasing hospital beds are filling quicker than they can be emptied.

‘The city is coming to the limit of its options,’ he added.

Despite warnings being issued by Mr Covas and other regional leaders in Brazil, far-right leader Jair Bolsonaro has continued to push for the country to reopen.

He has often flouted lockdown rules while meeting with supporters, though has taken to wearing a mask.

On Sunday he was pictured with crowds of hundreds of people in the capital Brasilia for a political rally.

He even joined some of them in performing push-ups as part of his ‘open-the-economy’ drive.

The Americas are now at the epicentre of the global coronavirus pandemic, according to WHO data, which on Sunday showed 1.9million cases in the region.

Previously, it was Europe at the centre of the pandemic. The continent now has 1.8million cases of the virus.

Europe still leads the world in terms of deaths, with 166,121, but the Americas now has almost 119,000 deaths and is gaining new ones at a much faster rate.