Sara Davies, 37, in her craft studio close to her home in County Durham

My haven, Sara Davies: The Dragons’ Den star and Strictly hopeful, 37, in her craft studio close to her home in County Durham

Sara Davies, 37, (pictured) shared items of personal significance in her craft studio close to her home in County Durham

I’ve spent so much time craft-teaching here since the pandemic began, and I’m surrounded by photos of my nearest and dearest. This old sepia photograph of the little pit village of Coundon, near Durham, where I grew up, reminds me of my roots – although people think I have a Geordie accent if I go further south than York.

I come from a long line of coal miners, though my mother Sue and father Frank went into business 30 years ago, and turned what was the local Co-op store into the hub of their business ventures.

I’m so excited to be swapping the boardroom for the ballroom! I made this glitterball for fun to celebrate being invited onto the new series of Strictly – it’s pieces of old CDs stuck on a lampshade.

I did ballet lessons as a girl, but I’ve done very little dancing for 30 years, apart from the odd one after a few drinks, so I’ve no idea how I’ll fare. I guess it will be a baptism of fire!

Having once been asked to pitch a product on Dragons’ Den, I was chuffed to become a Dragon. 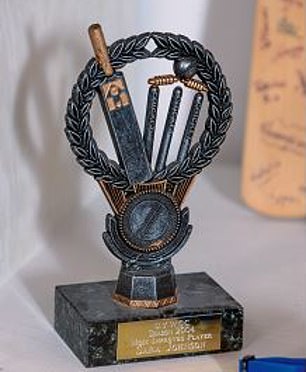 The series is shot over 18 days but not always in the order it goes out so, for continuity purposes, our clothes are washed and pressed every night so we look the same as the previous day.

I wore the pink dot outfit in the first series and the blue dress in the second. My sons Oliver, seven, and Charlie, four, were disappointed after the first episode, saying, ‘Mummy, you don’t look like a dragon and it’s not a real den either!’

I founded my Crafter’s Companion business in 2005 and it was The Enveloper, a gadget I designed with the help of my engineer dad that could create bespoke envelopes for home-made cards, that put us on the map.

5. HEELS FIT FOR A PRINCE

I was so proud to get an MBE in the 2016 Queen’s Birthday Honours for services to the economy. When I received it from Prince William I was 37 weeks pregnant.

As soon as he saw my huge bump he said, ‘Wow, that looks like it’s coming soon!’ I gave birth two days later, so it was a close call. It’s hard to get stylish maternity clothes so I’d blown my budget on this pair of Louboutin heels.

6. RUNS IN THE FAMILY

We were in our teens when I met my husband Simon, who’s now 41, when I went to see the local cricket team play – he was the opening batsman. I learnt how to score because I was watching all the matches, and when I went to university in York, I joined the women’s cricket club.

I was never a great player but I was given a couple of these ‘most improved player’ awards and this trophy [right] in recognition of my efforts, if not my skill. Now our two boys are getting into the sport.