Sarah Ferguson has defended her ‘superhero’ son-in-law Jack Brooksbank after he was spotted on a boat in Capri with three bikini-clad women at the weekend – insisting he was ‘just doing his job’.

The Duchess of York, 61, appeared on BBC One’s The One Show this evening to discuss her upcoming debut Mills and Boon novel.

The book – Her Heart For a Compass – sees her flame-haired heroine attract the attention of the press, which host Gethin Jones pointed out has parallels with real life.

Jack, a brand ambassador for Casamigos tequila, hit the headlines after cavorting with glamorous women – including topless model – aboard a luxurious 26ft ‘gozzo’ boat, while his wife Princess Eugenie looked after their baby son August at home.

Sarah took the opportunity to show support for Jack, whom she claims is one of her ‘most favourite people’.

‘Jack, who was on the front page, is a man of such integrity,’ she said. ‘He’s just one of my most favourite people, I call him James Bond actually.

‘He’s just a superhero in my book, and he’s a great father, a fabulous husband, and he’s never at front of house, he always likes to be at the back.

‘So for them to make this story is completely fabricated, he works as an ambassador for Casamigos, and he was on doing his job, and so I think it’s really important that we clarify that for Jack’s sake.’

Speaking about becoming a first time grandmother, Sarah added that she would wholly embrace it if Jack and Eugenie’s son decided he preferred Barbies over cars.

‘I’ve had sisters with daughters, and now it’s Barbies put to one side, I’ve got to get into cars and trucks and engines,’ she explained. 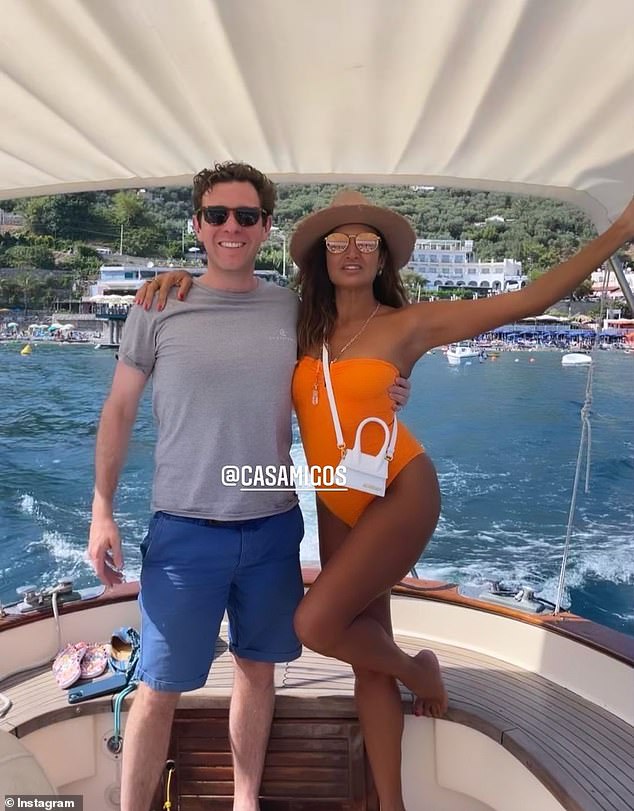 Jack, a brand ambassador for Casamigos tequila, hit the headlines after cavorting with glamorous women – including topless model – aboard a luxurious 26ft ‘gozzo’ boat, while his wife Princess Eugenie looked after their baby son at home. He is pictured with Maria Buccellati on the Amalfi Coast in an image taken from Maria’s Instagram story

‘Although it has to be said, lovely August, if he wants Barbies we’ll bring the Barbies back out! I think in life we never judge anybody or any thing, we just go for the heart.’

Sarah also praised Eugenie’s mothering skills and revealed that her older daughter Beatrice is preparing to give birth to her first child with husband Edoardo Mapelli Mozzi imminently.

‘I’m so lucky, my girls, Eugenie’s a great mum, everyone says you’re so excited with your grandson and I say no, I’m so proud of my daughter, she’s a great mother,’ she said.

‘And then Beatrice is about to have her first – and she’s already got Wolfie, who she’s really good with, and he’s five, so he likes watching Storytime with Fergie,’ before suggesting that her grandchildren call her ‘Duchy’.

Ahead of Friday night’s invitation-only Unicef Summer Gala, sponsored by Casamigos, where tickets are priced from £8,000 to £25,000, Jack spent Friday afternoon aboard the boat, exploring the caves and grottos dotted around Capri’s coast. 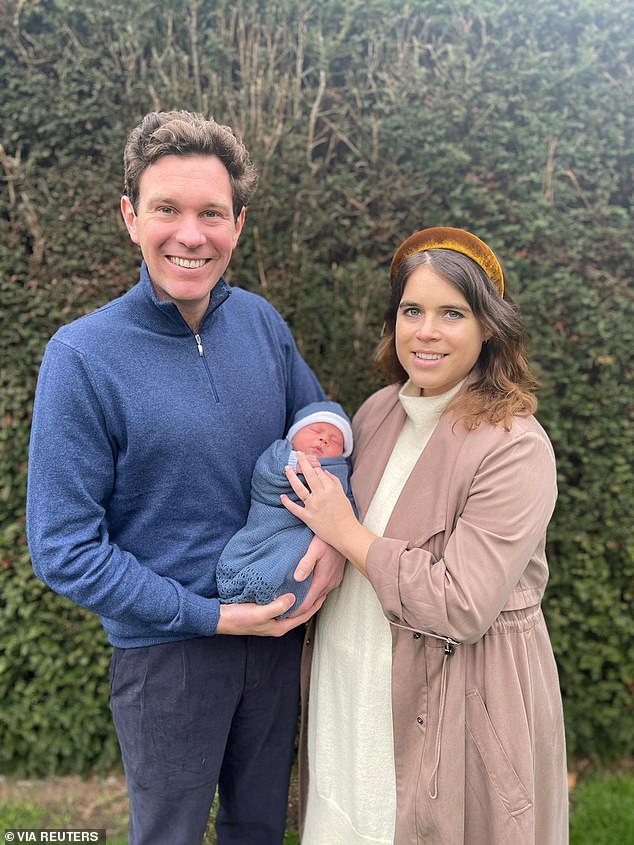 Joining him were Rachel Zalis – a former editor of Glamour magazine who is now Casamigos’s global director, and who soaked up the rays in a black bikini – and Maria Buccellati, a model turned fashion ambassador.

She wrapped her arm around him as they posed for an affectionate-looking Instagram snap to share with her 14,000 followers.

Also on board was Italian model Erica Pelosini.

Though she had a towel wrapped around her at the time, she periodically removed it to go topless in full view of Jack and the boat’s skipper.

During the afternoon-long boat tour, Jack dived into the Tyrrhenian Sea to join his three companions as they bobbed gently in the inviting water.

He was occasionally seen popping on to the boat deck to look at his phone – perhaps checking-in with Eugenie back at home.

It is unclear how Jack knows Erica and Maria, but both women are associates of Israeli socialite Hofit Golan, 35, a social media influencer who is well-known for turning up all over the world on yachts belonging to the rich and famous.

She counts Lady Victoria Hervey, an ex-girlfriend of Prince Andrew, as one of her closest friends. Last month Hofit was seen yachting with Erica and Maria in Cannes.

A source close to Jack told The Mail on Sunday that Eugenie hadn’t joined him on the business trip to Capri because he was ‘there to work at the ball’.

Sources said Jack’s job was to keep an eye on the cocktail bar and schmooze with famous guests, who included singers Katy Perry and John Legend and supermodel Heidi Klum.

Jack is said to hate his former nickname of ‘barman Jack’, which he picked up as he was working a restaurant and wine bar in Central London at the time he met Eugenie in 2010.

Stowe-educated Jack met Eugenie, now 11th in line to the throne, while skiing in Switzerland, and they married at St George’s Chapel in Windsor Castle in 2018.

They now live at nearby Frogmore Cottage in an arrangement which reportedly sees them pay rent to the Duke and Duchess of Sussex.

Jack signed up to promote the £45-per-bottle tequila brand in 2016. Casamigos – which comes from the Spanish for ‘house of friends’, was founded in 2013 by George Clooney, Cindy Crawford’s husband Rande Gerber and their friend Mike Meldmans.

It was sold to multinational drinks giant Diageo in a $1 billion (£720,000) deal in 2017, and the company has not long announced it made its millionth case.