Sarah Ferguson gave a shout-out to her new son-in-law Edoardo ‘Edo’ Mapelli Mozzi and his four-year-old Wolfie on Friday as she launched three new children’s books.

The Duchess of York, 60, was speaking on her Youtube channel to unveil the books – entitled Genie Gems, Arthur Fantastic and The Enchanted Oak Tree.

At the end of the broadcast she said she was missing her ‘girlies’ – newly-married Beatrice and Eugenie – before sending her love to Edo, Wolfie and Eugenie’s husband Jack Brooksbank.

She said: ‘I miss my girlies, where are you girlies? Beatrice, Eugenie, Edo, Wolfie and of course Jack, Jack the man!

Sarah also wished her sister Jane, who lives in Sydney, ‘lots of love’ before thanking her publisher Serenity Press and her staff for making ‘all this madness happen’.

The Duchess of York, 60, has been entertaining children and adults alike for the past few months with her daily ‘Storytime with Fergie and Friends’ – broadcast from her Royal Lodge home in Windsor.

But today she unveiled the new trio of her own.

The books are dubbed the ‘Serenity Collection’, and Sarah claimed: ‘As you sit and read these beautiful books you know that you really are bringing a smile to a child’s face.’

At the end of Friday’s Youtube live stream, Sarah said: ‘Oh and lots of love, love you sister and to all my team back here, the fairies and buttercups – Antonia and all the team back here that make all this madness happen for me because poor people they’re exhausted, they have to put with this craziness, and Fergie and Friends.’

She then finished off by sending love to her daughters and their husbands. 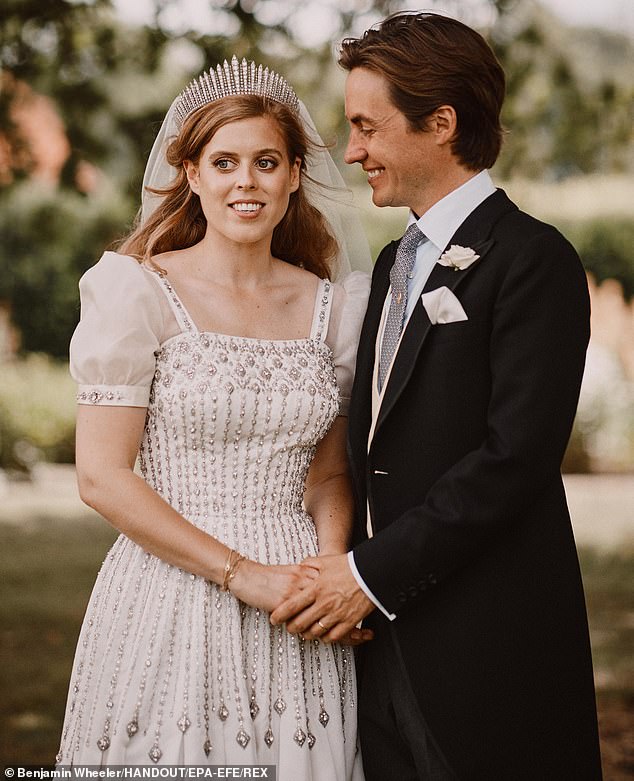 At the end of the Youtube broadcast she said she was missing her ‘girlies’ – newly-married Beatrice and Eugenie – before sending her love to Edo, Wolfie and Eugenie’s husband Jack Brooksbank. Pictured: Beatrice and Edo on their wedding day on July 17

Also in the broadcast, she said she thinks people find her ‘strange’ when she was speaking about her character Arthur Fantastic.

She said: ‘Arthur Fantastic is an extraordinary tale about colour and magic and being who you are.

‘I think people find me very strange because they can’t put me in a box.

‘They don’t know where to put me in life, because I find extreme happiness, I take it very seriously. 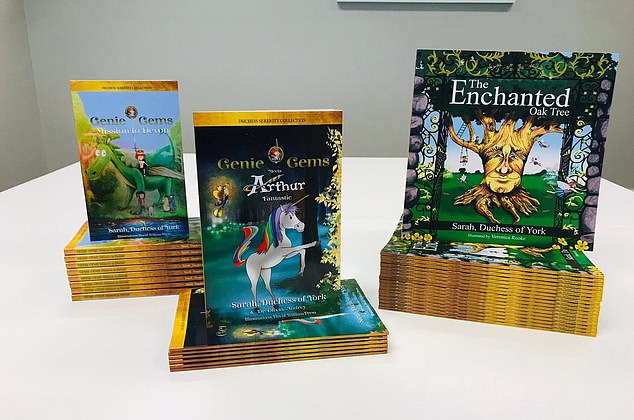 It comes after Sarah yesterday said on Twitter she was ‘so excited’ about the book launch.

Sarah announced she’d signed a seven book deal to write children’s stories, consisting of five picture books and a two young chapter books, back in February – with son-in-law Edo among the first to congratulate her on the project on Instagram.

The works will be published in Australia and New Zealand. At the time Ms McDermott described the duchess’ tales as ‘nurturing stories’.

She said: ‘We are delighted to welcome the Duchess to our press. Her beautiful books are aligned with our core value of sharing nurturing stories that empower young minds. 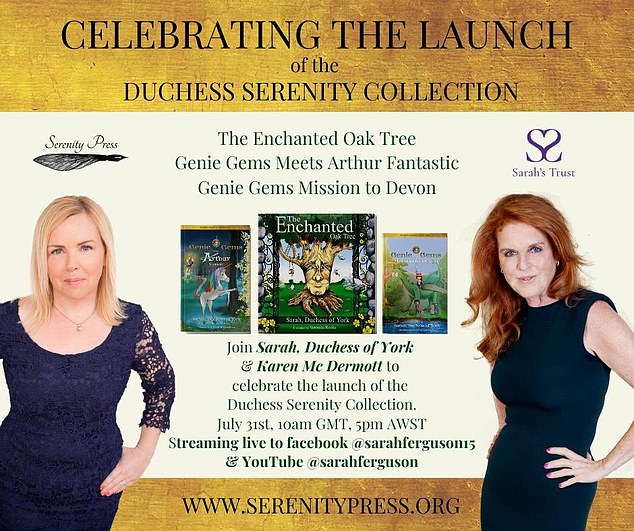 The works will be published in Australia and New Zealand. At the time publisher Karen McDermott described the duchess’ tales as ‘nurturing stories’.

Writing on Twitter yesterday, the Duchess of York said she is ‘so excited’ about the launch

‘We cannot wait to bring these books into readers’ hands.’

The royal is already the author of more than 25 books, including the Budgie the Little Helicopter and the Little Red series.

It’s been a busy time for the Duchess; earlier this month her daughter Princess Beatrice married fiance Edoardo in secret.

The royal wedding was initially due to take place on May 29, but had to be postponed due to the coronavirus pandemic.

Beatrice eventually decided to have an intimate ceremony in front of 20 loved ones, which included her mother Sarah, father Prince Andrew, grandmother the Queen and grandfather the Duke of Edinburgh.

Fergie also has an exciting TV project in the pipeline – judging celebrities as they dance with horses for a new show.

She has filmed the pilot for upcoming Fox production Dancing With Horses, where stars devise complicated dance routines with the animals.

A keen rider herself, Prince Andrew’s ex-wife is an expert on the panel – and former ITV commissioner Claudia Rosencrantz has claimed she was ‘wonderful’ to work with.

The pilot was shot in the UK because Studio 1 required access to highly trained horses from Britain and France, and Claudia admitted shooting with them was a ‘complicated’ job.